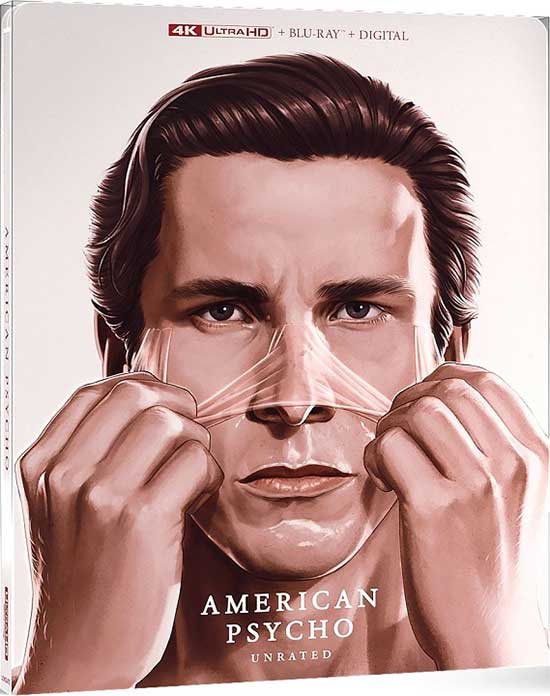 “Patrick Bateman is handsome, well educated and intelligent. He is twenty-seven and living his own American dream. He works by day on Wall Street, earning a fortune to complement the one he was born with. At night he descends into madness, as he experiments with fear and violence.” (courtesy IMDB)

Controversial as it may be, this tale of a Wall Street high-flyer by day, loony killer by night, contains less violence than one would expect, and certainly no where near the detailed nature of Bret Easton Ellis‘s ambiguous best-selling novel on which this movie is based. However, the moral flag-wavers were still out in force about the film’s ‘derogatory treatment of women’ subtext, even though the director’s name is Mary Harron. Now, almost a decade since it’s big-screen debut, American Psycho (2000) has traveled quite well and is actually perfectly suited to DVD and the smaller screen, complimenting the ‘This Could Be Anyone’ ideal originally expressed by horror master Robert Bloch. 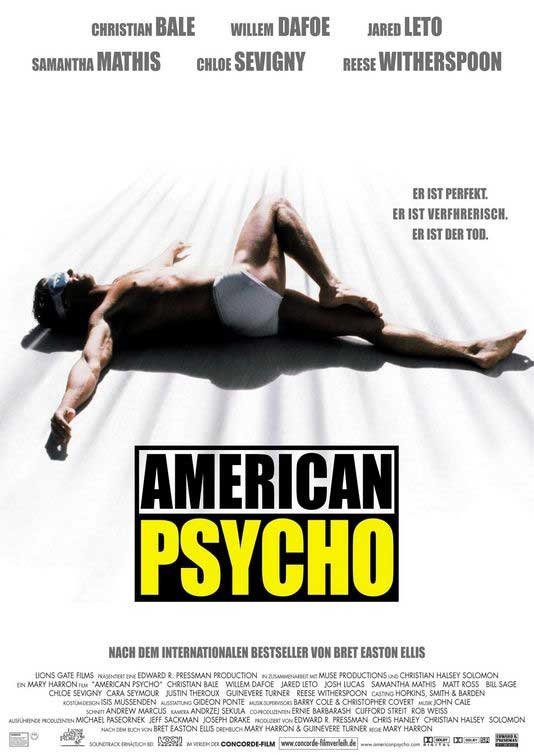 Patrick Bateman is a successful ‘mergers and acquisitions’ manager of his father’s broking business, which he jokingly refers to as ‘murders and executions’. Not merely satisfied with the finer things in life, Bateman demands more, right down to sweating-out decisions on printing the supreme business card. Yet amongst all his minimalist interior design and detailed appreciation of yuppie consumer-culture, Bateman has a much darker and complex side he feels is beginning to take over. You see, he just can’t fight the inner urge to kill innocent people. Not from a distance, either, but violently mutilate people at close range, even within his own immaculate inner-city New York apartment, with a bloodlust normally reserved for prehistoric carnivores.

Christian Bale‘s performance is so brilliantly hollow (like the character is supposed to be), the real fear is knowing any hope of mercy or remorse is out-of-the-question as many a victim falls into Bateman’s line-of-sight. Supporting Bale is a rather subdued yet effective Willem Dafoe as the detective slowly piecing together Bateman’s life of vice. Also effective is Reese Witherspoon as Bateman’s superficial fiance, and Chloe Sevigny as Bateman’s constantly oppressed secretary, blissfully unaware of her boss’s double-life, as she aspires to catch his dubious attention. 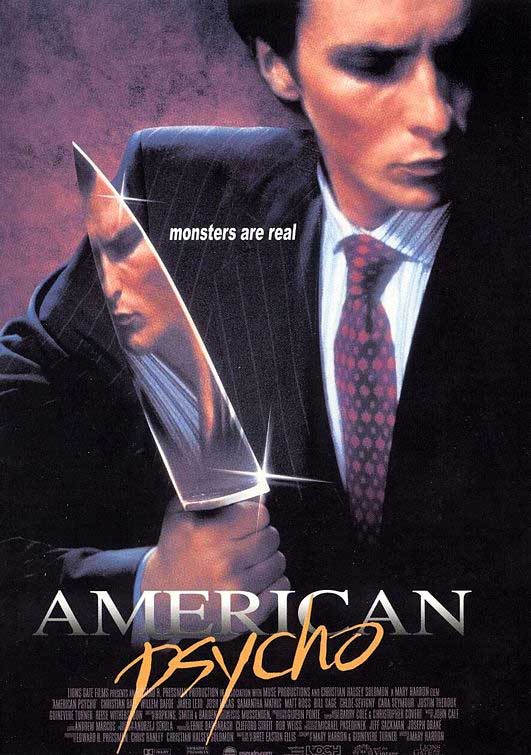 However controversial the subject matter or inadequate the ending, the real magic of American Psycho is the social commentary on the illustrious eighties yuppie culture. Whilst Bateman may doodle violent sketches of carnage on a restaurant napkin, he is also a well-researched guru on the genius of Phil Collins, Whitney Houston and other consumer-culture that is hysterically faithful to the mindless taste that characterised the eighties. Blending all these aspects with the idea that American society is so bland that it needs a splash of indiscriminate crime to lend more substance, this is a thought-provoking reflection on the thoughts we have every day. Bateman just happens to act them out…or does he? 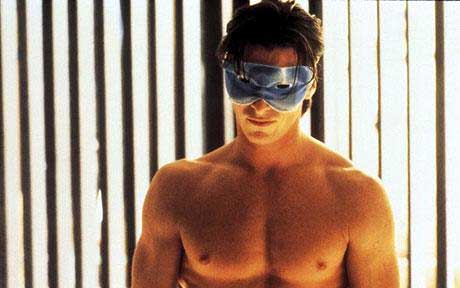 The ultimate punch-line delivered in Bret Easton Ellis’s novel was whether much of the action takes place in the killer’s warped mind rather than by his hand. Here, the same question is pondered, yet not really followed through on, making for an ending that still leaves more questions than answers. Not that this is is necessarily a bad thing, it’s just the majority of American Psycho is so slick and well-polished, the rather lazy ending lets down the overall atmosphere created. The film oscillates between horror, fantasy, and sarcasm, always under the sign of black humour. Scenes of Bateman’s world are hilarious, from the best business card contest among his colleagues to the orgy with prostitutes where he just looks at himself in the mirror while filming the spectacle, finally moving on to the scenes of unreal violence. The critique is aimed to be sharp and spares no-one. Colleagues, fiancee, lawyers, prostitutes and even the detective, they’re all gnawed away by vice, desire to be seen, money, perversion, madness, cruelty, and Bateman unites all of these qualities, absorbing them seamlessly. In fact, he seems to have been chosen to carry out all the sins of this world, a modern Sodom and Gommorah, and the fact that he’s not punished for his crimes (whether they’re fictitious or not has little importance) has just one goal, as he becomes conscientious he is to be tortured for all the vices of his world. 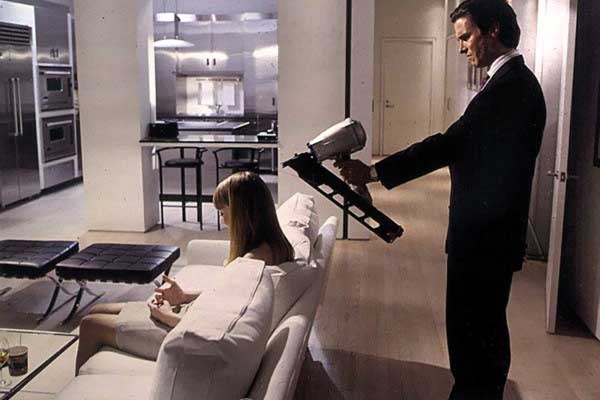 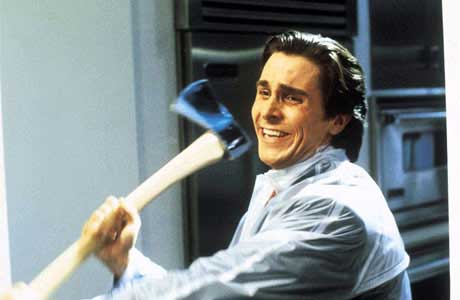 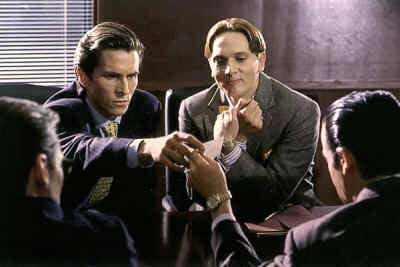 The lengthy descriptions in the book are thankfully absent, except for Bateman’s shower soliloquy on personal hygiene. Had the film been faithful to the descriptions it would have lasted several days. One can also question the final scenes with the police, too deliberately fantastic to be honest. Nonetheless what appears awkward is in fact a shrewd lure destined to create confusion in the audience’s mind regarding Bateman’s mental health. The film blurs easily between reality and fantasy and suddenly offers the viewer, like Bateman, an obvious solution, a sort of easy exit of the nightmare for the character and for the audience. However, in the final scene the sign on the door behind the lawyers and Bateman contains the key to the film – ‘This Is Not An Exit’. In a world where appearance reigns the illusions are deceptive. Bateman’s lawyer can’t tell him apart from his other clients, so how can we be sure of what he says? Lunacy or prison will not be an emergency exit for Bateman who must submit to infinite punishment of cruel reality. 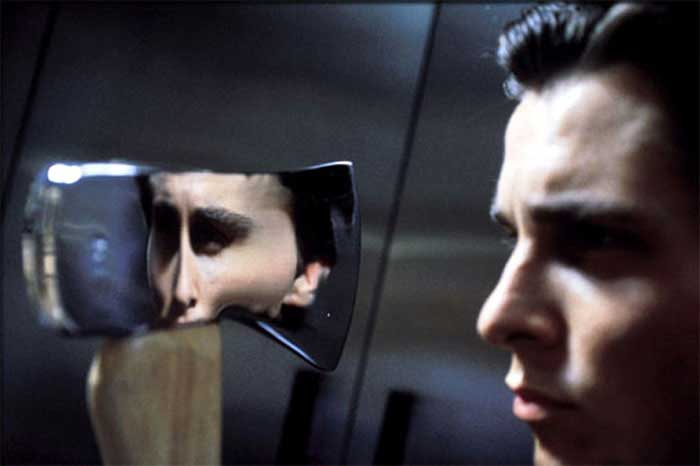 In the recent tradition of movies like Fight Club (1999) and the films of M. Night Shyamalan, American Psycho employs a surprise ending. There is enough ambiguity about the last act revelations that one can interpret them in more than one way, but the most likely choice forces the entire movie to be re-interpreted through a different filter. In retrospect, the film holds together no matter which approach you accept, and the seams never show. American Psycho may be controversial and some people will undoubtedly be shocked and repulsed by the violence, but it represents one of the most daring, inventive, and invigorating movies to reach the screen during the otherwise dreary year of 2000. American Psycho unmasks the darkness and the cynicism of 1980s America and further succeeds by luring those it targets: its detractors.

I’m terribly sorry for being so gosh-darn serious this week, it’s just that I find it rather difficult to be flippant about films that I believe deserve a little more respect, like this one. Anyway, please join me next week when I have the opportunity to inflict upon you the tortures of the damned from that dark, bottomless pit known as Hollywood for…Horror News! Toodles!