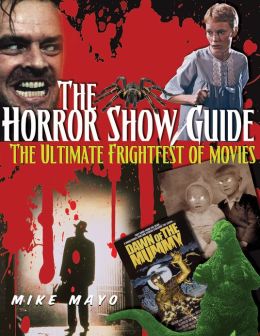 Fresh of the printing press arrives another fat-filled release by the publishers at Visible Ink. With the publisher’s interest in metaphysics-topic book releases, it was sooner or later that they embraced the horror culture with a volume they could call their own. Championing this release is author Mike Mayo who “has to be” exhausted with movie-watching by now with all the films coverage in this book.

“The Horror Show Guide” is just what the doctor ordered offering 100’s of films for readers to browse over to find the perfect range of titles for an evening of terror. In fact, it occurred to me that even with the number of films books and horror film review books on the market, fans of the genre will still buy up everything they see to keep their book shelves rich with variety.

So what does the “The Horror Show Guide” offer? Well, there is a trend in horror guides that usually goes 1 of 2 ways, less films with longer analysis or shorter analysis with more films. “The Horror Show Guide” takes the 2nd approach with tiny synopsis-style blurbs covering a smattering of titles. Titles that are found within franchises such as the “Nightmare on Elm street” films are grouped into a longer review that ties them all together.

My observation here is that there is “just” enough to gain a peek into the films mentioned, but not enough to get there full gist. or instance, David Lynch films are well known as being mighty complex to review, instead the entries here are usually curbed with a simple statement proclaiming the film as an oddity and left at that. Other blurbs try and get to the point with a few sentences that summarize and comment on the films as a being either a worthy entry or not.

The author does his best to inject facts and history when appropriate, but on the whole keeping things real basic and short. I found this read to be a better match for horror fans or “new” horror fans who just want to reference a few titles to check out. Longer reviews and analysis writing can be found in “other books” on the market. Still, keep in mind that the book is almost 500 pages long, so there is still plenty here to intake. My guess is if an author were to do a longer analysis on “every” title, it would have to branch into 10 volumes or more just to fit it all in.

The book has a huge “credits” section and index to help readers locate titles and actor matches. Bonus inclusions include short horror lists” for those who like “theme nights” in addition to a decent amount of black and white photos. I didn’t agree with all the lists, which at times seemed rushed rather than a well thought out stance on what is listed…but its still a reference point for readers to inquire into. entries are at times a bit opinionated, so keep in mind that you may disagree with Mike’s perspectives.

The book is designed with an easy to read format that includes large titles. In short, its a decent read that will go just fine in your library cinema section. Mike Mayo has a great writing style that makes the entries fun to read and suitable for hardcore fans.

From atomic bombs to zealous zombies, this cinefile’s guidebook reviews 1,000 of the wickedest, weirdest, and wackiest scary movies from every age of horror. With reviews on many overlooked, underappreciated gems such as Alice Sweet Alice, Daughters of Darkness, and Zombie, as well as the numerous Stephen King adaptations and modern updates such as Night of the Living Dead 3D and The Wolfman, new devotees as well as the discriminating dark-cinema enthusiast will love this big, beautiful, end-all, be-all guide to an always popular film genre. Established directors, including Wes Craven, John Carpenter, Tim Burton, David Cronenberg, and Guillermo del Toro are given their due, as are the new generation, represented by Larry Fessenden, James Wan, Alexandre Aja, and others. In addition to the hundreds of horror film reviews, this guide includes fascinating and fun top-10 lists and sidebars that are designed to lead fans to similar titles they might not have known about.