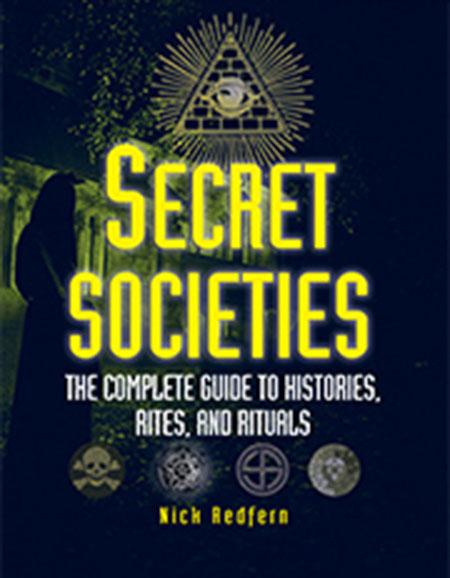 Readers can use this book in reference fashion to peruse the various collective of secret societies that have been reported over the years. The book covers a wide gamut of organizations from satanic cults, to slender man cults, to men in black, woman in black and to elitist groups such as: Skulls and Bones, the Bilderberg group and the free masons (to name a few).

Coming off the Leah Remini series, I was quick to jump ahead into the scientology sections to get even more dirt on the past of L. Ron Hubbard. Interesting stuff indeed!

As the book continues on you’ll much in the way of religious based organizations and reference articles, or subjects that pertain to the groups.

It doesn’t stop with just secret cults as it details the KKK, UFO gatherings and important reference material pertaining to some of the more covert operations. “Secret Societies” like many more of the Visible Ink Press releases make great additions to collector’s libraries who are fascinated with all sorts of controversial subjects and secrets otherwise best kept from the publics eyes. Rather than reading it cover to cover, the release is best consumed by portions of interest.

The book is organized in alphabetical order with easy to find entrees to each of the book’s points of interest.

You’ll enjoy this read well-written under Redfern’s great sense of narrative and research gathering making for a fine coffee table book ( if not just as a interest volume alone). Check out many more of Visible Ink’s releases rich in historical findings, facts, and myths  making up the world’s more controversial subject matter.

Claims and counter-claims. Accusations and allegations. NSA spying and suppressed evidence. Cover-ups and threats. Documented connections and intrigue. Suggestions of a New World Order. Are we to believe the coincidences are mere chance? Might the paranoid be on to something? Who really holds the levers of power? History admonishes us to be vigilant of hidden plots and nefarious agendas of governments and the powerful.

Shedding light onto sometimes sinister and coercive groups, Secret Societies: The Complete Guide to Histories, Rites, and Rituals is packed with details on nearly 200 organizations, their histories, found members, backgrounds, and suspected conspiracies. It uncovers and examines the hidden, overlooked, and buried history of some of the most notorious groups, including the Illuminati, the Freemasons, Skull and Bones, World Bankers, the Secret Government, and extraterrestrial invaders, to name a few.

Tracing the chilling and corrosive affects of powerful cliques and their plots, it exposes their deep reach into the operations of today’s world. Providing gripping details, presenting the facts, and letting the reader decide, this revealing work probes the hidden agendas and agreements of secret cabals and associations. Along the way, it debunks myths and presents the evidence on an invisible world of influence and power.