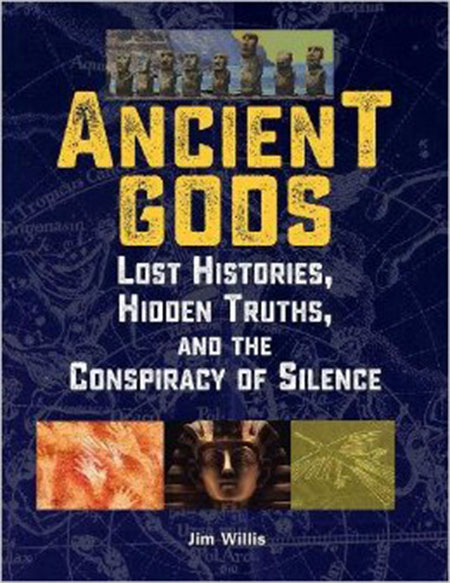 A book about where it all began. As author Jim Willis takes us thru myths, historical moments of interest and truths otherwise lost or distorted over time, we are given a compendium of all sorts focused on events, cultures, and past civilizations that may have been lost in history books due to the much touted “conspiracy of silence”. A thoughtful and engaging introduction explains how history’s events of the past may have either been altered in the translation of such events thru the years and ages or simply ignored in favor of keeping the status quo of history in line.

As in many of these Visible Ink Press releases, readers are encouraged to peruse thru the chapters and subjects of most interest. This round we are looking at Ancient Gods, thought leader generations, the passage of time thru the past and future and pertinent event changers.

Subjects covered include Mystery Hill, Stonehenge, the Giza pyramids, the Olmec heads, paradigms of the past, the Nazca Lines, the Mu Ruins and SO much more . It doesn’t stop there as Willis covers the subjects of ancient religions and technology filling in the gaps of time and its many connect-the-dots theologies.

The book “Ancient Gods” is simply a thought provoking read that explores the connections between ages of change and the historical significance. It’s a book of origins, original thinkers, and the problems that have plagued academia. It’s a map book of issues that have risen from new ideas about these origins and how the ideas found ridicule often being deemed as conspiracy. It’s about a failed establishment that picks and chooses the facts that they deem deserving rather than looking at the potentials and evidence to support them. It’s about former carriers of wisdom and knowledge providing depth and spiritually. It’s a foundation of clues suggesting potentials and alternate realities rich in enigmas and possible theories. Yep, you got it…its all those things and more!

In all this is a book designed to invoke thought to challenge the status quo of historical offerings. While we really can’t place out fingers on all possibilities it’s the lingering questions of eras past that might just hold the answers.

A fine read by author Jim Willis written in a voice that narrates more like friend than a scientist. We look forward to future offerings by this team and the interest it inspires!

What are the origins of modern civilization? Do the world’s pyramids, the Nazca Lines, Easter Island statues, and other enigmatic structures, archaeological wonders, and geographic anomalies contain evidence of ancient gods?

Sifting through the historical and archaeological evidence, Ancient Gods: Lost Histories, Hidden Truths, and the Conspiracy of Silence probes the myths, stories, history, and facts of ancient civilizations, lost technologies, past catastrophes, archetypal astronauts, and bygone religions to tease out the truth of our distant past and modern existence. It takes and in-depth look at the facts, fictions, and controversies of our ancestors, origins, who we are as a people—and who might have come before us. It tackles more than 60 nagging stories of ancient gods, ancestors, alien visitors, theories and explanations, including:

• Why did our ancestors crawl deep underground and paint on cave walls?
• How did the megalithic temple site called Göbekli Tepe come to be built—11,600 years before the agricultural revolution?
• How were massive stones, weighing tons, dragged miles to build Stonehenge?
• Who—and why—were pyramids built on the equatorial band circling the earth?
• What secrets does modern DNA analysis reveal mankind’s heritage?
• Are we to believe the Ancient Alien Theory?
• And more!