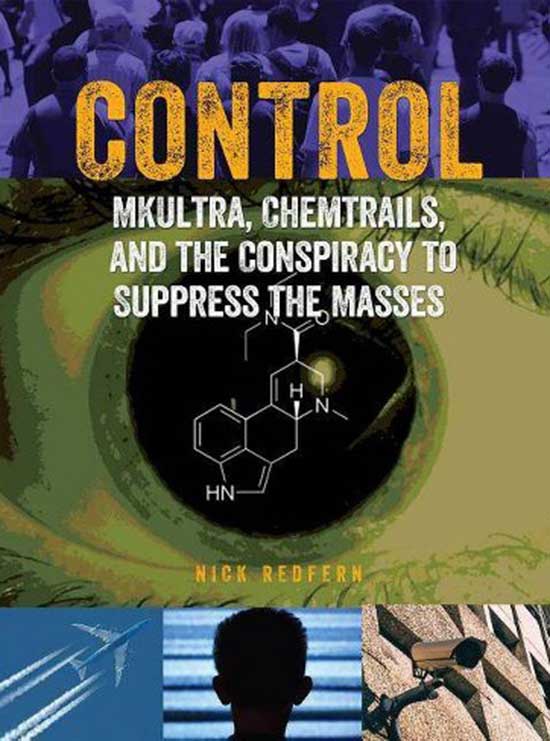 From author Nick Redfern and the fine folks at Visible Ink Press comes his latest research extravaganza titled: “Control: MKUltra, Chemtrails, and the Conspiracy to Suppress the Masses”

In fact, I was just reviewing a previous release of Nick’s, when 2 more books from this prolific author arrived in the mail. Redfern may just be the most hardworking author in the business!

So onward to the product at hand. Any book that features the word “control” in bold letters across it cover is surely to raise a few eyebrows. In the digital age of data, smart TV’s, and information overload, you have to expect a residual effect to follow. So what is all this data that is being collected intended for? Marketing, residential planning, profiling, anticipated formulas for mass consumer awareness and understanding, or is it just sitting on hard drives waiting for the wrong hands to use it for nefarious purpose?

I would think all of the above. As with anything massively informative and useful, its purpose is not entirely clear. Though these are the residual effects of exponential progress and technology.

Moving on to the book at hand, we open up on the discussion of smart TV’s and their behind the scenes intention. Like our cell phones, our laptops, and any device that transmits, the intention is multi purpose. Samsung who has claimed “no nefarious intent” is caught flip flopping on the idea that logging and voice commands are indeed being captured. While each of these organizations claim utmost security and protection, we are also at the mercy of hacker organization who make headlines bypassing these security protocols.

How about the control that oozes over from TV ads and new programs. Certainly we have entered the age where all of this is at the all time peak going as far as to influence street riots, protests, gang like gatherings and unheard of violent or abusiveness behavior trickling over into the masses. Cars are now fit with highly technical computer systems that can determine issues or even troubleshoot from remote distances. Cut a car engine? Yes that too! Ever heard of Onstar?

Control over the Internet is happening as we speak. While less of an issue in the states, new reports flood in every month at details the mass control methods used in overseas areas. In some cases, restrictions and censoring, in others, the pure prevention of access.

Google under constant scrutiny is reported to have handed over portions of data per government request. Other events include the reported Internet kill switch that has been implemented….just in case!

Drones, surveillance, and the unmanned open skies introduce a form of technology that presents controversial discussion. Mainly the creation of unmanned spying and weaponry.

Reports come in about drones unsolicited surveillance to reports of drones the size of a mosquito able to hide undetected. In any case, we have entered into the drone era, with more to surely come!

Edward Snowden, the NASA whistle blower, has been a topic of discussion since his document unveilings in 2013. If ever there was a suspicion about NASA and its involvement, it surely came to the surface with Snowden’s reveals. This topic continues to grow as new information is uncovered. Never the less, All those touch points you were afraid of revealing “touchy subject matter” are now a reality.

The dumbing down of America? Surely the signs of this don’t need a book to point hem out with triple bacon cheeseburgers ads assaulting us everywhere, the increase of diabetes, the manipulation of the school system and the educational short cuts being handed out fueling the minds of our future generations. Once thought to be fiction is finding itself to be an ever increasing reality designed with fit a larger agenda

This and so much more make for this release, pointing and prodding at the system and its most questionable revelations!

Nick has done an outstanding job here presenting a highly interesting collective of facts, fiction, and realities. The book will surely make you question things that you haven’t in the past (and more of the future). His research is unmatched providing controversy after controversy detailing the bullet point summaries of conspiracy-like interventions that run the gamut of industries, corporations, high ranking officials and high profile thought leaders. Your best bet is to scan thru the chapters for quick reads and then return later for more in depth narrations.

My only criticism here is,  Redfern has a underlying bias democratic agenda, calling out Republican events, new reports, and organizations. I would highly suggest in today’s society to take a more neural balanced approach in his authoring,  so that it avoids these kind of insinuations.

Free exercise of religion. The right to peacefully assemble and to bear arms. Free will is an integral part of democracy, but how free are we really? The NSA, computer chips, surveillance cameras, search engines, social media and major corporations spy on our every move and try to influence our every decision. Big Ag and Big Pharma sell us food, medication and drink of dubious benefits. The media, fake media and out right propaganda try to tell us what to think. Our every computer key stroke and purchase is exploited.A thorough review the history of government mind and population control and the modern acceleration of attempts to dominate the masses, Control: MKUltra, Chemtrails and the Conspiracy to Suppress the Masses exposes the efforts of the government, big corporations and the privileged few to manipulate the thoughts, behaviors, and actions of the population. It investigates coercive methods and techniques from chemicals in our air, food and water to tracking our every move, purchase, phone call and touch of a keyboard.

Shadowy government programs, unexplained events, and their chilling legacies are illuminated, including MKUltra, chemtrails, HAARP, NSA, CIA, NASA, UFOs, RFID chips, Project Monarch, Montauk Project, government LSD experiments, as well as … • Edward Snowden’s exposure of the National Security Agency’s top secret program of widespread surveillance • NASA and a powerful group control of what we know – or what we don’t know – about the secrets of outer space • United States government, military and intelligence us of drones to spy on our every outdoor activity • The centuries long use of hypnosis and mind-control to keep people in line through sex • The use of high-tech acoustic-weapons to disperse crowds, disable an individual in seconds and the sinister experiments to use them to control and enslave man. • Far-reaching programs to monitor and record us in our very own homes through our phones, computers and everyday appliances. • Plots designed to depopulate the human race through murderous viruses. • A careful plan to dumb down the population by limiting access to the media, banning books, spying on libraries, and denying crucial information on world history, politics and more. • Big Pharma pushing the use mind-altering medicines, such as anti-depressants, mood-altering drugs, anti-anxiety meds, and sleeping-pills to encourage lethargy—and gain control. • A ruse designed to take away our freedoms under the guise of a bogus alien attack. • And, much, much more!!!

Control: MKUltra, Chemtrails and the Conspiracy to Suppress the Masses reveals government mind control and the powerful attempts to dominate the masses.

Control: MKUltra, Chemtrails, and the Conspiracy to Suppress the Masses | Nick Redfern is now available at Visible Ink Press