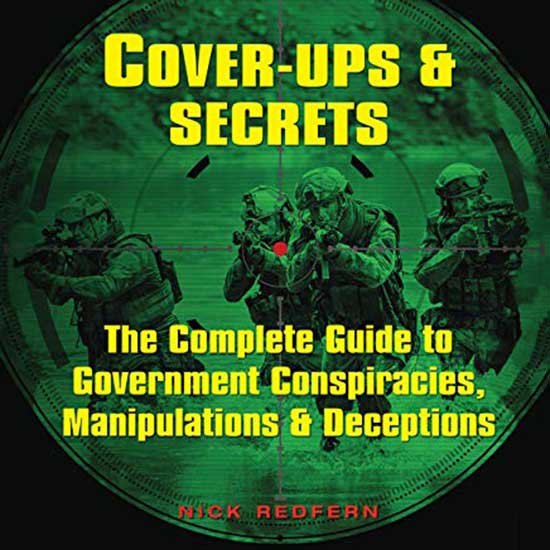 From author Nick Redfern comes his latest research extravaganza titled: Cover-Ups & Secrets: The Complete Guide to Government Conspiracies, Manipulations & Deceptions. Nick, never one to rest on his laurels, may just be the next Jesse Ventura, at least in written form. The fine folks at Visible Ink Press keep em’ coming, and with those come several new editions written and researched by Mr. Redfern. Quite the busy man these days, Nick seems to especially have a love for conspiracy research.

If there is one thing I’ve noticed in the last few years, it’s the rapid increase in books covering New World Order, government cover ups and those nasty conspiracies that raise their ugly heads (seeming less and less like conspiracies these days). We are indeed in the information age with AI and data taking the lead not only as concepts but as bridges to our future. With this, comes the more rapid unveiling of all things secret. While it’s clear that we’ll never really know all the truths, it is books like these that help remove those veils with intense research and the constant questions of “what are they really hiding”. That “they” is not always so clear, but placing it under the more general umbrella of “Government” seems to be the MO for everything these days.

Content within “Cover-Ups & Secrets” moves from one chapter into the next detailing a piece of research connected with some form of cover up of deeply held classified incident or other. some of these include the following:

UFO’s continue to rear heads with different theories and explanations, One such explanations was proclaimed per author Mac Tonnies who believes that extraterrestrials are in fact versions of us from the future called “cryptoterrerstials”. He claims that they are limited in interactions as far as changing future directions, while still being observers with deep interest in our planets directions. While not entirely embraced by the community it is a theory that is worth consideration.

Time travel is an area that still is under big debate as to its potential. Reports appear from others that they have experienced such time travel episodes claiming to have briefly passed into the past thru some sort of worm hole. Sights and a sounds are describe as those from era past void of any present technology.

John Titor, a man claiming that he time traveled back from year 2036 arrived on the scene in 2000 making waves as a predictionist from the future. The claims even went as far as making it onto the Art Bell show. However when the future finally did come and his claims didn’t come to pass, he was dismissed as unfalsifiable.

A much stranger cover up comes in the way of a secret WW2 cover up that speaks of a strange man discovered covered in hair and plastered with mud who was taken to Starcross, the nearby hospital. Shortly after admittance a couple of men took him away warning the hospital not to speak of it. Later we learn that this person who went by the name of Downes may have been part of a family who had a rare disease called Wolf-man syndrome. This report correlates with other reports of strange sightings that identify finding werewolf-like creatures being discovered late at night. None the less, the whole report and sightings has been tucked away labeled classified from public viewing.

Bio war conspiracies come to the surface that reveal official bodies participating in cases surrounding animal deaths. Anton Dilger, a German-Amercian was hired by the secret service to cultivate germs and anthrax designed to affect mules, horses, and cattle. With a team of 12, he was hired to travel the world and affect selected livestock locations. He also designed these germs with intent to infect water supplies. He was found murdered but his mission and intent still remain a mystery. Reports of Government involvement into livestock deaths continue to go under investigation in fear of a bio war outbreak.

Government secrets appear to trickle over into the Hollywood realm, as a prior report on Nixon floating around detail inviting Jackie Gleason 1 night to a special covert showing. The story continues with reported older Alien bodies encased in glass viewed at an Homestead air base. The incident received skepticism however, Gleason, an avid UFO researcher. enthusiasts, got the evidence he needed.

On of the many cover ups suggests that Robert F. Kennedy was about to release information on UFOs prior to his death. This of course was combined with many other secrets that might have caused his assignation. Though Kennedy privately began to formulate a plan to share his secrets about real UFOs with the Soviet. Part of this was due to informing them of the difference between UFOs and ballistic missile or CIA reconnaissance aircrafts avoiding war to emerge.

Other stories of the famed Big Foot emerge that range from missing adults and children that may have been attacked to those who claim they impregnated or kidnapped by similar creatures in the past. None the less, the big foot mystery has been the source of cover ups and conspiracies that claim the events were made secret and kept from public knowledge.

John Wayne, John Lennon, Errol Flynn and others are at the center of numerous past controversies that detail plots ranging from Nazi associations to donations to organizations such as s the IRA. Cloning, Reptile men and zombie conspiracies delve further into the bizarre and unusual circumstance of past concern.

Though this is just a sampling of the stories presented within that cover difference cover up instances. Instances that over the years have gained traction as further potential evidence of the Government’s secrecy.

If this is your bag, then there is plenty here to keep late night conversations going. If not, it at least provides a sufficient introduction into these various events, historical summaries, and controversial subject matters of past, present and future.

Visible Ink continues to put out great collective volumes. They cover a gamut of subjects that deal with the supernatural, the odd, conspiracy organizations and related. I’d love to see them produce a volume on the whole Scientology organization, (but due to that organizations bullying techniques, that’s probably never going to happen).