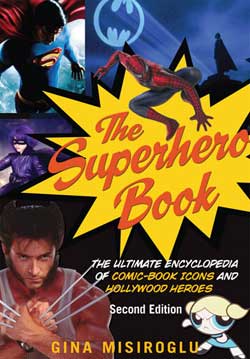 The fascination with heroes and villains is stronger than ever with the birth of proper cinema-realized super heroes. Super heroes are nothing new as they have been with us since childhood. They were in fact a major part of my upbringing and learning about how good and evil clash, conquer (and prevail).

The publishers at Visible Ink present a fantastic volume called simply “The Superhero Book. It’s enough reading to keep you satisfied and not “too much “that you never get to thru it all. What I fell in love instantly was its tendency to favor the fantastic superhero groups that arrived over several eras. We have the Silver Age, the Golden Age, the Modern Age and so on….each signified by a new and exiting group of super powered characters (And characters are what these comic book super heroes are all about!!)

While my background is, self-confessed “pretty astute” to all the groups that arose, one might get easily perplexed with the super hero groups and how many of them intermingled in various forms. First off we have the mainstays of DC and Marvel with the later inclusion of offshoot publishers like the Image comics “Spawn” franchise. Heroes ranged in abilities, organics, origins, powers, personas and supernatural abilities. Take a rag-tag collection of heroes like “Son of Satan”, “Ghost Rider” or “The Spectre”…while they could easily be misrepresented as “horror” heroes, they were in fact about the support of good intentions (Those intentions might be misguided and questionable but all the same..decent). This volume of course will need a companion piece “the Villains”, which I hear is already underway. I’d be equally interested in that collective, as villains have run the gamut in powers and magnitude themselves.

So for starters, the book takes you thru a pretty thorough run thru of the different heroes and groups (in alphabetical order). We learn of the “X-men”, “The Invaders”, “The Justice League”, “The Inhumans”, “Doom Patrol”, The Guardians of the Galaxy” and even obscure teams such as: “The Metal Men” (note to non-newbies, these should be welcome old acquaintances of yours) Each requires further investigation, but rest assured there is plenty of talented artistry and stories that will keep you fascinated and fulfilled.

“The Superhero Book” sets up a worthy, but brief introduction into these comic book franchises. As we learn, thru the rebirth of proper technology, we see less desirable hero movies like “Generation-X” blossoming into the higher profile CGI visuals of Fantastic Four. We see old campy shows like “Batman” evolve into runaway hits like “Heroes”. We even see the foundations change from “just” crime-fighting into serious emotional and personal driven issues. You might call them “heroes with issues” as I have refereed to them over the years. Interested in a few originals? Look no further as you dig into where and why some of these heroes have even emerged. Need to figure out the difference between “Dead man”, “Plastic Man”, “Miracle Man” and “Metamorpho”? Here’s your chance to become equipped with all the nerdy chat room lingo that you could hope for.

It’s a whirlwind of information at you fingertips with a championed approach to covering all the greats. I’ll comment hat alot is covered but not every hero receives his own character segment. While heroes like “son of Satan” Machine man”,”Man=Beast” and “Dazzler” don’t need an elaborate breakdown they are still mentioned in the appropriate sections of the book. The backup of included illustrations and photos helps to refresh you memory a bit and introduce those you may have missed. I would have loved for each to get a illustration inclusion, but there is still plenty to look at with what you have.

The book is written by author Gina Misiroglu who has done a wonderful job at really bringing the best of the best into a solid edition.

It’s great fun in a whopping 450 plus pages aimed at inspiring and educating. I love these kind of books for their encyclopedia-style cataloging! I suggest reading up on some of the more obscure heroes for some early classic inspiration.