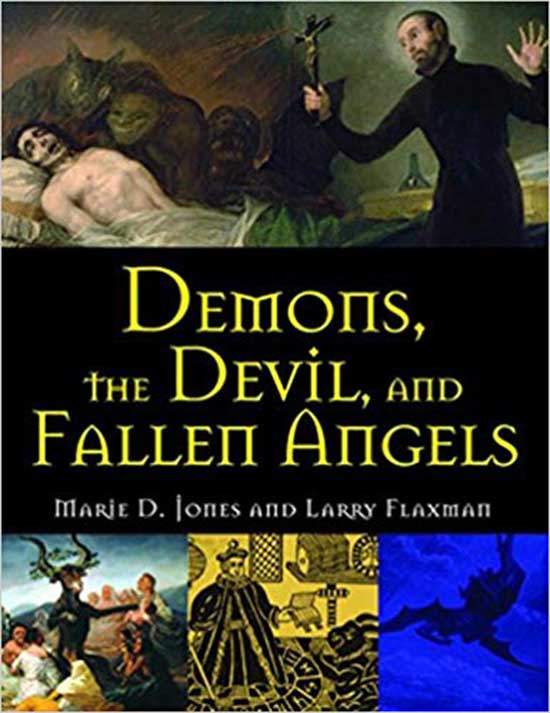 “Demons, the Devil, and Fallen Angels” is hands down a very impressive book written by an equally impressive team of writers. I’ve loved everything these 2 have released and look forward to more in the future. The authors being by Marie D. Jones and Larry Flaxman, an author team that I highly recommend following!

In any case, “Demons, the Devil, and Fallen Angels” is perhaps one of the best books on this subject I’ve read to date due to it being so comprehensive in its subject matter. I was pleasantly surprised to see a volume that is entirely dedicated to demons, the devil and dark things which in the case of the title may suggest all being 1 in the same. The book takes a deeper look into this supernatural area that has been at the root of cultures religion, horror, legend, and mythology. We all fear the devil, however we very rarely get the details about why and where all this lore and history came from. I was blown away by the insight here that really questions how these entities came to be, where confusion may have occurred, along the line and how influence and myth have contributed to the interpretations.

In reading, I was well aware of the fact that the writers may have had a few encounters themselves while taking on such deep subject matter. As with ghost hunters, it is just a part of the territory and thing that attaches itself to those who prod. Better them than me, so thank you for doing due diligence in your research, so we can read in comfort.

Folks, it doesn’t matter if you are religious, Christian, atheist, Catholic or other, there is no harm in educating yourself in the dark matters of today and yesterday. If not for preventative reasons, or just for the simple fact of intelligent conversations.

“Demons, the Devil, and Fallen Angels” is a book that covers alot of ground. Demons in particular who still today seem shrouded in mystery as to unexplained events that occur involving a variety of named demonic entities.

We of course are familiar with Satan (the devil himself) who seems to gain all the glory but is in fact often just the puppeteer behind his minions activities.

We learn about haunted possessed objects (a popular subject matter that has helped to promote the recent Anabelle movies). We learn about crossroads, Lilith, possessions, and demonic places with further looks at unexplained subject matters having relationships to demonic things sometimes mistaken otherwise.

The book covers additional areas of UFO’s Men in Black, the moth man, skin walkers, and even the history of the Christmas German devil Krampus. Fascinatingly it is revealed how this former holiday demon began as a shaggy beast and was modified over the years into a form of St Nick (a friendlier version likened to Santa Claus).

There are many, many points of interest here (which I won’t go into elaborate detail) that are still worth mentioning in review alone. Some theories suggest that Satan may have been female (or associated with the god Venus) due to the beauty aspect alluding additionally to the fact that the church has adjusted facts and pages to align with a primary male presentation of this entity.

There are other theories that he may have been a Jinn arriving from other cultures, or merely a form of symbolism that has manifested itself over the years created primarily to reinforce larger agendas. Of course if you are from Christian faith, the entity called: Satan, Lucifer, and the devil is very real proven per reports of possessions and scriptural documentation.

Cultural areas are covered ranging over numerous countries such as: Asia, Australia, New Zealand, Africa and Russia (which in itself had its own version called “Mavka”).

It’s all up for grabs here and doesn’t lean favoritism to a particular direction, but rather presents them all. The often termed “fall from heaven” is examined as a metaphor that was borrowed from the tale of fallen angels who were also considered Avengers of holy justice, over the more literal translation that has been embraced today. (aka Satan and his minions of fallen demons).

Certainly the lesser entities, the demons, are examined as having a strong purpose in culture, films, and the connections with dark unexplained episodes (appearing to be documented more these days due to the increasing fascination with all things media).

Looking for signs of possession, the rites of Exorcism, or just curious about where Satanism fits in? From magic to Necromancy, to Nazi tales, to Witchcraft and Wiccan lore, no base is left uncovered. All this leads up to a chapter on modern music, media, and filmmaking bringing the whole spectrum of evil to a closing. The book pokes and prods at unions and relationships that inspire fact from fiction. If you have any interest in any of this, then look no further!