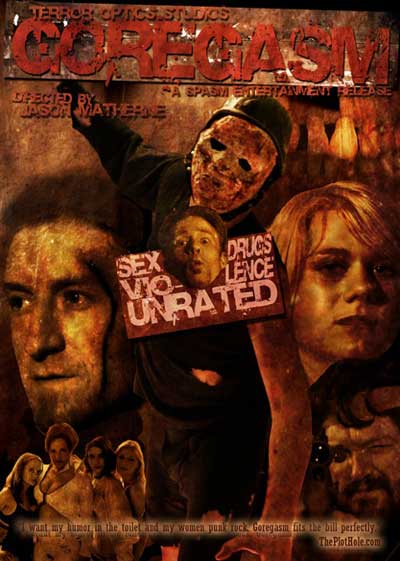 Many boats will surely remain unfloated by Goregasm, which is so purposefully amateurish that surely no-one could ever really be titillated or offended by it. Its serial killer adorned with a papier mache knob strapped to his chin, the film is hardly begging to be taken seriously. Like the more recent The Taint and The Gruesome Death of Tommy Pistol, it acknowledges its low budget, its tongue entombed firmly in its cheek. Sex shop clerk Mark and his girlfriend Stacey find themselves repeatedly frustrated by the Cockface Killer’s designs upon them, with him trying to murder them every time they have sex. Desperate to get his end away, Mark has to try to convince slobby New Orleans cop Douglets Depschett that Cockface is actually real. Add to that an all-female gang known as The C.L.A.M declaring war on all masculinity, and you have one hell of a Goregasm on your hands. 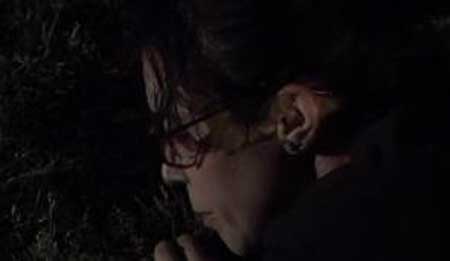 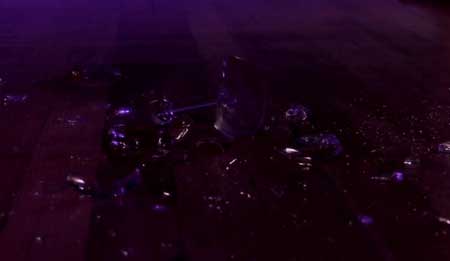 A sequel to an even lower-budget movie called Attack of the Cockface Killer, Goregasm has a cheerful dirty enthusiasm that it’s hard not to warm to. With a plot which is like Se7en meets Clerks by way of Troma and John Waters, what it lacks in Hollywood sheen it more than makes up for in backroom filth and sleaze. By conventional standards, Goregasm is a terrible film, but it’s hard to completely condemn a film in which the villain’s name is ‘Cockface.’ Love or hate it, the papier mache facial dong is the next big accessory.

Unbelievably, the Cockface Killer isn’t even the most disgusting character in the film. That honour doesn’t even go to the leader of The C.L.A.M, a bearded lady who kidnaps unsuspecting men and makes them do terrible, terrible things inside small torture boxes. No, I refer you to Detective Depschett, the masturbating doughnut cop of the first paragraph. In its obsessive pursuit of the ultimate filth high, there’s something to shock all sensibilities. My personal favourite – the movie’s theory as to just what lies inside of the humble glory hole. You certainly won’t find that inside the latest The Way Things Work encyclopedia. It’s enough to make you swear off glory holes for life. 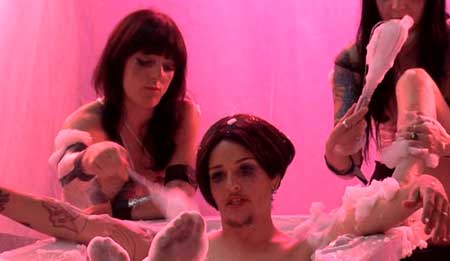 No orifice, effluence or perversion is left unexplored. Everything from scat P*rn (nothing to do with music) to (surprisingly light) bondage and foot fetishism is covered in Goregasm. The acting is as dodgy as the special effects (expect to see a lot of prosthetic penises) and script, but the cast band together in an amicable manner that makes them difficult to dislike. Playing Depshett, Doug Ryan is revolting but watchable, the leader of the C.L.A.M oddly compelling.

A little focus wouldn’t have gone amiss, but that’s not really where director Jason Matherne’s priorities lie. No, Goregasm is cheap, nasty but strangely difficult to dislike. It’s a movie which opens with a small child tugging himself off to fatty P*rn in his room. His disapproving mother (not quite disapproving enough, mind) warns him that “the Cockface Killer will get you!” if he keeps at it. It’s a more memorable warning than “you’ll go blind”, anyway. And completely true, too.

As the title suggests, Goregasm is a mess. It throws everything at the wall and hopes it sticks. Never mind Fifty Shades – Goregasm is the whole spectrum of f*cked up.