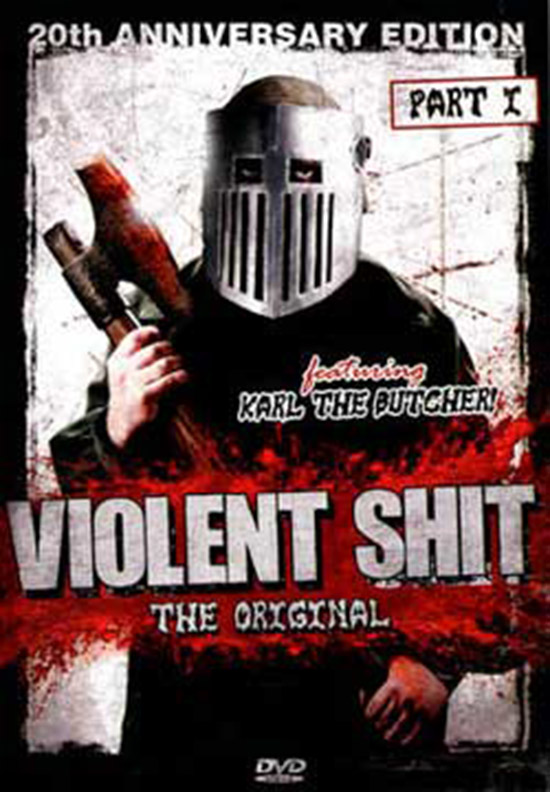 The film records in detail the many murders of homicidal maniac K. It opens with a brief scene of his childhood, where he is abused by his mother. Twenty years later, K. is at the height of his killing spree.

Violent Shit 1 stars the fantastically-named K., the Butcher Shitter. The painfully long credit sequence sees a child playing with a ball in stop-motion, but the action follows swiftly. Upon arriving home, K. is apparently beaten by his mother and he responds by (presumably) killing her. Apart from this initial insight into his psychology and a later flashback to a childhood episode where K. is visited by what appears to be a pervert and bloodthirsty devil with an extendable tongue, there is little character development. Instead, the film jumps into the future and focuses on what appears to be a particularly bloody streak of murders we are meant to understand are perpetrated by the same character.

The reasons for K.’s hump, rotting face (a mutation?), and vacant stare, something which might leads viewers to confuse him initially with a backwoods zombie, remain as much of a mystery throughout as the final scene where he gives birth to a baby. 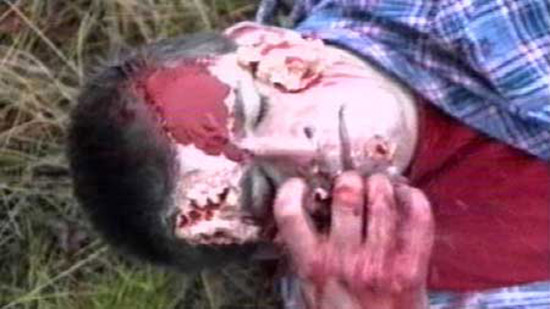 The film is creative, but its incredibly limited budget (allegedly around $2,000) does not allow for much. The initial beheading of K’s mother is represented through an inset that shows a knife followed by a splash of gore. This is an imaginative and restrained start that jars with later protracted bloodbaths. The carnage in these is chronicled slowly, so that one can see almost every detail of the various butcherings. These are actually quite effective, and the camera only lingers for as long as the scene requires it. A very good and disquieting soundtrack that has ‘1980s’ written all over it works as a perfect aural companion. In a way, this makes up for the film’s many shortcomings. 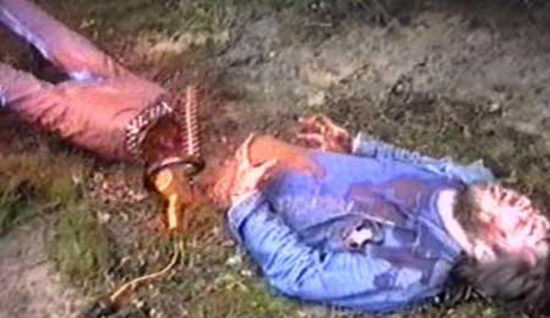 The plot of Violent Shit 1 is so thin as to be virtually expendable (not to mention narrative continuity) and the quality of image and sound are beyond amateurish. The shaky camera, for instance, is far from the mockumentary experiments of later horror, and often appears out of focus. This is of little importance, since the film makes little claim to artistry and revolves almost exclusively around a series of murder set pieces. Although these are often ineptly orchestrated, the film deserves some credit for its fixation and capacity to go that little bit too far that gore-hounds will appreciate.

Some of the sequences are particularly noteworthy, like the one where a man gets his hand and penis hacked off, whilst others, like the initial shoot-out meets-disproportionate-cleaver, are probably best forgotten. In fact, in its DIY style, the film often feels like a VHS granddad of the August Underground films, even though there is no talking to the camera or elaborate superposition of recordings here. In fact, one of the main problems are the tedious scenes in-between murders, where victims are set up in laborious prologues to their deaths. Particularly puerile is the toilet humor of two older men drinking inside a car having a conversation about anal sex and hemorrhoids. 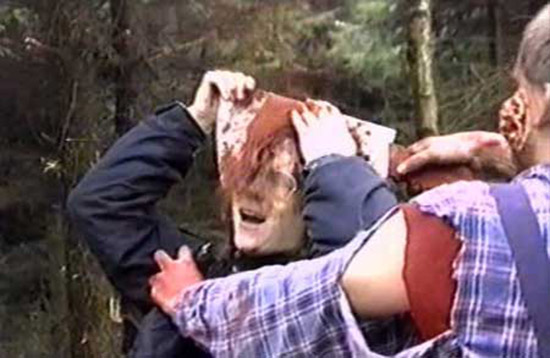 All in all, this film offers some cheaply made camcorder thrills for the extreme horror lover. Some of its ‘delicacies’ include a nipple-chewing scene, a man’s body and face being sawn in two, and a complex disembowelment that features what look like strings of sausages. It also features an unexplainable sequence where K. tears a hole in the body of a crucified man dressed like Jesus Christ only to bury his torso inside him. 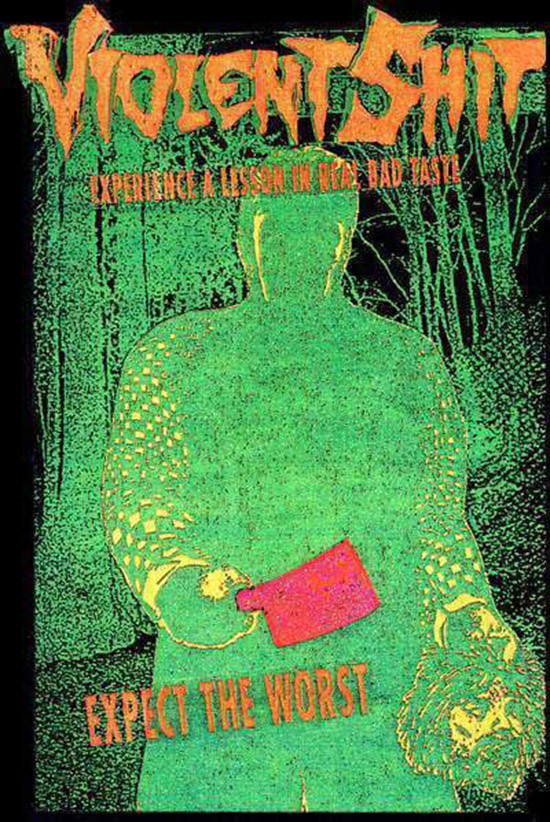 If you want your horror films to have some substance, than you might want to look elsewhere, but otherwise you will be well-served. If you like the sound of this and/or enjoy the first instalment, you might also want to check out Schnaas’s two other films in the K. trilogy, Violent Shit 2: Mother Hold My Hand, and Violent Shit 3: Infantry of Doom.