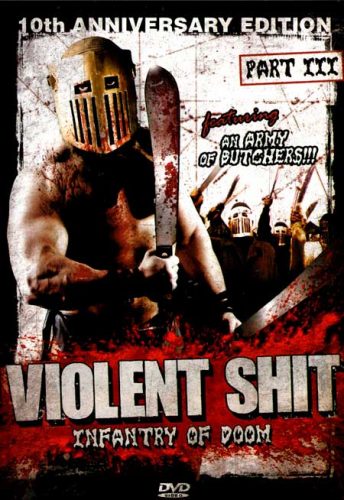 Three men row a lifeboat to a shoreline inhabited by iron mask-clad followers of “The Maester” and his son. Through every conceivable, sometimes random, means possible, each character meets a brutal demise. And I do mean each character. I think there’s literally one survivor on the entire island by the end.

Wow… just… wow. Not a good wow either, by the way.

The Violent Shit series is a German-made film series known for their needless brutality, having made their way around the underground VHS trading circuit since the late 80’s. They contain the typical video quality of underground films of that era, which is to say none at all. Violent Shit 3: Infantry of Doom is, quite simply, one of the lowest quality movie productions I’ve ever had the misfortune to witness. The video was home movie quality, and not in a retro, 70’s good way, more in a “It’s 1992 and I only have a handheld VHS camera so that’s what I’m using to shoot my magnum opus” kinda way. Unfortunately, after diving into the film, video quality quickly became the least of my concerns.

The script was absolutely horrendous, seemingly written by a junior high student who found words like “shit,” “f**k,” and “puke” to be the funniest damn things in the world. They most certainly are not. The Asian character was called “Rice Face” and “Chop Suey” several times, because if there’s anything the Germans are noted for, it’s their racial sensitivity. The sound effects were absolutely god-awful, seemingly coming from one of those “101 Sound Effects To Impress Your Friends!” type CDs you can pick up at Wal-Mart, because they very rarely fit into the film and were even less realistic than the plotline. The acting was horrifically bad, though I hate to blame that entirely on the actors as the directing and writing were clearly subpar.

And the dubbing… hoooooly shit the dubbing. You know how when you watch one of those old Japanese monster movies, and the people’s mouths keep moving way after they finish saying what they’re saying, and it’s kinda funny? You know, like in a MST3K kinda way? With Godzilla and the like, it was clearly a product of its time. They’re dubbing over what is clearly Japanese, and they do the best they can to just get across to the viewer what they’re saying, because their dialogue is actually important to the plot.

There’s no thought put into how exactly they’re going to match the voice, because it’s clearly a Japanese-to-English import. Violent Shit fails on this account, too, because not only does there seem to be no attempt at making the voices match up, but all of the voices seem to be the same f*cking guy. Look, I get that it’s a non-existent budget, and I get that most of what budget they did have was spent on the super-not-realistic gore, but come on, the same guy doing all the voices on the dubs? It’s criminal, it makes the movie nearly unwatchable. I really thought I had seen the absolute worst of the worst in sound editing when I watched Murder-Set-Pieces, but I was sorely mistaken. Violent Shit takes the awful crap cake. The worst part about this crime against dialogue is that, since the voices all come from the same actor, you can’t always tell who’s talking, making even what little plot there is totally incoherent.

Now on to the good(?) part. The gore was very prevalent throughout, and the visual effects clearly made up the majority of the film’s already small budget. Most of the killing was generally needless, which is exactly what you’d expect from a film called Violent Shit. The gore wasn’t particularly “good,” and most of it wasn’t realistic in any way, but it was extensive and frequent. Sometimes just having gore can make a movie extreme, and that was certainly the case with this film. There are some creative kills, but they’re so frequent that it begins to become a chore of boredom rather than ingenuity. The gore is somewhat inventive at times, but it’s not a very good invention, like if you devised a way for your toaster to also be a toilet. Yeah, it’s technically an invention, just a shitty one. 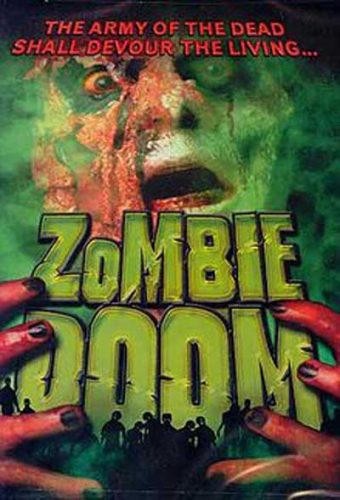 Unfortunately, this film falls into the category of disturbing films that you have to power through because you want to say you’ve seen it. With practically no plot, horrible acting, horrific videography (I can’t even call it cinematography), and some of the worst sound editing possible, I can’t say I’d recommend watching Violent Shit 3, and the fact that many fans claim it to be the best of the bunch scares the hell out of me. Yeah, if you want to go after some of the more obscure gore movies, you can watch it, but you wouldn’t be missing a whole lot that adds to the genre if you skip this one. Pursuit of the goriest and most disturbing films means you have to dig through humongous piles of shit to find the pearls. This film was a big steaming piece of the pile. No pearls here.

And, uh… be careful with the end credits if you’re an epileptic.