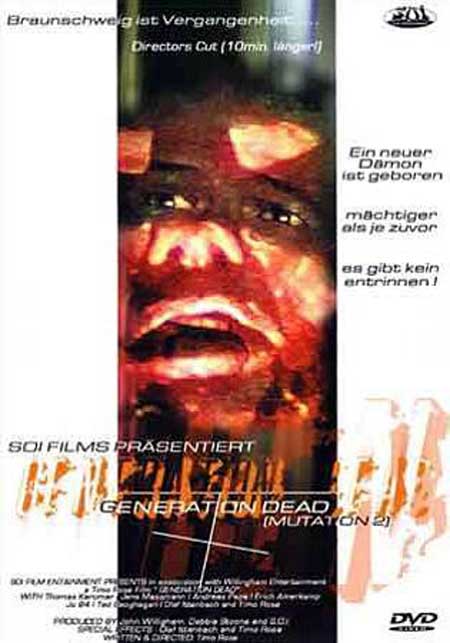 The toxic chemical rediscovered in the original film causes more death and destruction across Germany, leading to a new mutation unlike anything the world has ever seen…

You know, the more of Timo Rose’s movies I watch, the more I respect the man as a filmmaker. Movie after movie he aims high, often far higher than he can reach, but seems to get a little closer with each try. Mutation, as you may remember from my previous review, was a bit of a clunker, an early Rose film that tried to do too much at once and ended up falling a bit short on all fronts. Two years later, we have Mutation 2 – Generation Dead, which picks up right where we were left at the end of the first film, but with better actors, better effects, and a couple more years of experience from which the director can draw from. The difference is monumental.

(As with some of the independent German horror films, including some of Rose’s other films, Mutation 2 – Generation Dead is in German, but lacking English subtitles. So bear with me, please.)

K7B, the Nazi-created super serum, still appears to be a hot commodity in the underground crime world, even after it created some kind of mutated creatures that have a taste for widespread evil (see the events of the original Mutation for reference). Set fifteen months after the events of the first film, Mutation 2 brings in a mostly new cast (aside from director Timo Rose again playing Tom Kaminski) along with more crime and more bloodshed. A powerful crime boss (?) named Mr. Goldmann (played by Thomas Kercmar) and his henchmen (including Erich, played by Erich Amerkamp, who also “starred” in Bethmann’s Die Insel der Damonen) have taken an interest in acquiring some amount of K7B, which they will use to become more powerful and create an unstoppable army. Tom and Benny (Andreas Pape) are two small time crooks who get caught up in Goldmann’s plan. There are two other guys who have some of the K7B, and when one of them is hurt, his buddy injects him with the serum, helping all hell to break loose.

At least, I’m pretty sure that is what is going on. There are a lot of great action and horror sequences in Mutation 2, but there are also a lot of longer conversations and business meetings and threats, all of which are lost on this non-German speaking reviewer. So rather than trying to make up explanations or guessing on plot specifics, let’s cover what we do know. 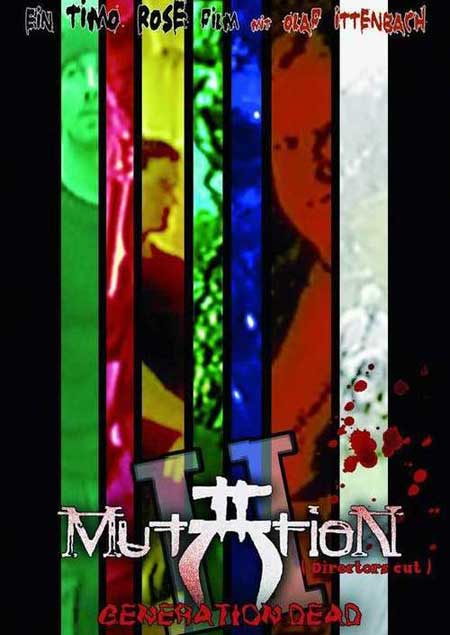 Rose’s Mutation 2 – Generation Dead is markedly better than part one of the trilogy (part three, by the way, is called Mutation 3 – Century of the Dead, but you can also find parts 2 and 3 together in one re-edited and condensed version called Mutation – Annihilation. And now you know…). Part of this can be directly linked to the lessening of CGI used in part two as well as a step-up in the make-up and effects department. Rose brought in Olaf Ittenbach (director of Dard Divorce) to supervise the effects this time through, and it shows (Ittenbach also has a cameo role in the film, much like Andreas Schnaas did in the first film). There is an especially brutal scene that is similar to one that was attempted in the first movie, a Hellraiser-like scene of hooks and chains tearing flesh from bone, but this time so much more effective and gruesome. Add in some other great blood and gore via gunshot wounds, fist fights, sliced chests, and a head explosion, and you’ve got even more to be happy about.

Mutation 2 seems to pace itself better than the first part, letting the story flow in the allotted time frame. Where part 1 had a ton of information and events and characterization crammed into its runtime, part 2 lets its action breathe a bit, saving us the confusion and headache of trying to follow a million different directions all at once. Rose takes advantage of the better pacing to show off a little style he appears to have learned from Tarantino or Rodriguez, throwing a couple decently tense gunfights and showdowns into the mix. And we’re not left without a bit of comic relief, either; there is a pretty funny, albeit confusing, scene filmed in English where a guy named Alex talks to his agent on the phone, sarcastically thanking him for getting him a role in an all German movie.

I don’t know if an English sub-titled version of Mutation 2 – Generation Dead exists, but if it does, I recommend this shot on video movie. It’s not the most amazing thing you’ve ever seen, and it’s not without flaws, but it shows that when Timo Rose has some room to work, he has sharp style and a good sense of how action should come across while working with a limited budget. I’d compare this one to Rigor Mortis (2003) as far as enjoyment factor goes. And yes, I will be going out and looking for Mutation 3 now, not only because I am curious how the story finishes, but because I also want to see how Rose’s skills progress with each film. Thus far, he’s earned my attention and respect.