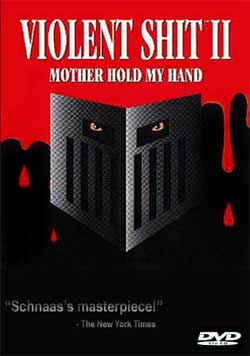 Drilled by his deranged mother, Karl the Butcher jr. takes revenge for the gruesome death of his father. Anyone who sets foot on the forest has to die. Hold on to your limbs as Karl jr. slaughter his victims to some amazing tunes of terror. Decapitation is just the beginning…

I could probably just go ahead and say something like “Violent Shit 2 is an early 1990’s, shot on video, German splatter movie by Andreas Schnaas,” and many underground horror fans would already have an opinion formed, one way or another. That’s because Mr. Schnaas has a unique style all his own, one that doesn’t allow too many fans to fall in the middle – for the most part, they either love it or hate it. As someone who doesn’t hate fun, I am a big fan of his work. From the over the top perversion and nastiness of Goblet of Gore, to his remake of the Joe D’Amato classic, Anthropophagous 2000, and everything in between, I always know that I’ll get a few good laughs and a few nasty splatter-gore moments in anything he’s connected to. Violent Shit 2 is no exception. 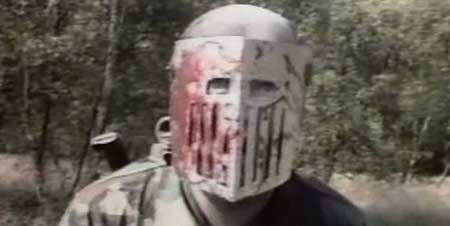 In the first movie of the series, Schnaas’ directorial debut appropriately titled Violent Shit, we followed Karl the Butcher as he chopped up, mutilated, and slaughtered pretty much anyone who got in his way, including Jesus(?). In part two, we watch as his son, Karl the Butcher, Jr, continues in his father’s misguided footsteps, following his mother’s wishes to hunt humans in order to get revenge for his father’s death. This is pretty much the entire plot of the movie, and for about eighty-two minutes or so, this is exactly what Karl the Butcher, Jr does.

As we discussed earlier, if you’ve seen some of Schnaas’ other movies, you know generally what to expect from him. Violent Shit 2 – Mother Hold My Hand is no exception to the rule – still shot on video, still over the top and amazing. The opening scene gives us a drug deal gone bad, a martial arts fight scene, lots of blood, lots of craziness, and a pretty cool shot of a fist going through a throat. After the fight is over, and one man remains, we are introduced to Karl the Butcher, Jr, a hulking man wearing a silver helmet and carrying a variety of weapons, including a machete that makes quick work of the sole surviving criminal. The opening credit sequence that follows continues in fine Schnaas tradition: heavy metal theme song (“Violent Shit,” by Vice Versa), pretty girls (who are not in the movie past the credits) dancing interspersed with scenes of brutal gore and carnage.

I’ll be honest, my one complaint with this movie is that the storyline that surrounds the antics of the killer seems dull and out of place. Right after the credits, instead of giving us more Karl Jr, Schnaas instead gives us a journalist interviewing people about a recent rash of killings. In fact, the point of view of the entire film is actually that of a guy named Paul Glas as he learns about Karl the Butcher, both Sr. and Jr. Glas meets up with Mr. X, an informant who has secret information as well as photos detailing what is really going on. I guess all of this is “important” to the storyline that flows throughout the Violent Shit trilogy (as well as the additional appearance of Karl in Unrated: The Movie and Karl the Butcher vs. Axe), but the device Schnaas decided to use to info-dump all this on us seemed an afterthought, and to be honest, it’s best left as that as we just go ahead and enjoy the rest of the movie’s insanity. 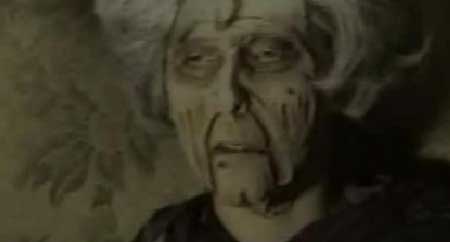 There are so many great scenes in this movie, it’s hard to decide where to start. After dragging some kids away from their campsite, Karl tortures them at his mother’s command (much in the same way Ike and Addley do in Charles Kaufman’s Mother’s Day (1980)). This includes a head split in half with a shovel, then used as a bowl for mother to drink blood from, a nasty hook-in-scrotum scene, and a stapled-closed vagina, not to mention Karl going down on his mom. There is a Rocky-style training montage, lots of post-mortem pants-pooping (toilet humor has as much a place in Schnaas’ films as gore does), and a really awkward sex dream that Karl has after his mom reads him a dirty bedtime story. At least, I think it’s a dream… isn’t it? 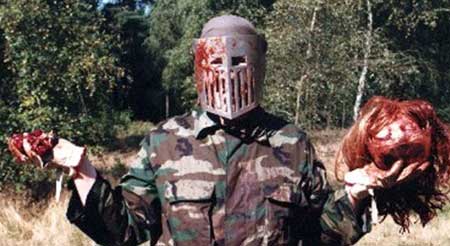 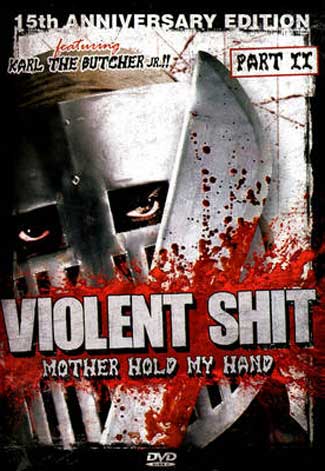 Yes, Violent Shit 2 is shot on video. It is a low budget film. It is over the top, ridiculous, gory for the sake of being gory, and, at times, outrageous. And to top it all off, it is amazing. Watching through the closing credits, and seeing the bloopers and the actors laughing and goofing around, you know that this movie is a product of people who love horror movies and are having a great time. In fact, Schnaas’ movies are the perfect fun movies to watch with some friends. They aren’t at all mean-spirited, they’re as goofy and funny as they are bloody and nasty, and there is a certain tongue-in-cheek nod to the audience around every turn. Yes, I do recommend this movie to anyone who can find it. If you love horror, if you love fun, if you love all types of violent shit, you’ll love Violent Shit 2.