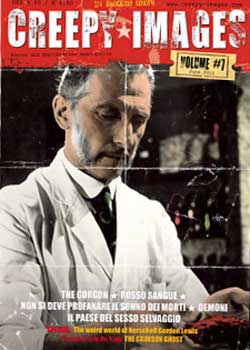 Number #7 must be a lucky number, as a brand new “Creepy Images” arrives in its usual and horrifying display of tantalizing retro imagery. This round unleashes a smattering of “Hammer’s The Gorgon” imagery with a German name so long I’m not going to bother trying to copy it correctly. Though with it comes a collection of images under the guises of Columbia-Bavaria which took their advertising camping in different directions than some of its previous (less to the imagination) releases. What’s interesting here is that each appears to be a black and white image with color added giving the pics a surreal retro tone (more popping than usual for that matter).There is alot of Cushing here, but less horror centric imagery.

Mondo Cannibale (which was also features in other Creepy Images issues) ends things with a titillating reveal of some stark nudity imagery from this Lenzi exploitation piece. you have to love those old cannibal films that pushed the envelope with eroticism and gore.

This includes some interesting images for “Demoni” of which I’ve come to know as “Demons”. The sequel situation is quite interesting indeed, though for short, it went on to a total of 5 under the “Demons” franchise. A great shot of the infamous hands coming-out-the-chest shot is included along with a few cool iconic color photos.

On the gloomier note are some stills from the Spanish horror film “No Profanar El Sueno Del Los Muertos” with its hypnotic poster art and its darkly lit lobby cards. Again, more zombie far from this era that was inspired by the Romero releases.

The highlight this issue arrives in an article titled: “The Weird World of Hershell Gordon Lewis“, which features a wonderful selection of Hershell Gordon Lewis film poster art pieces. Inspired by the Grand Guignol era, it is clear why this creator was labeled with the term “Godfather of gore”. Lewis took the early days of horror and helped to step it up a notch with a gory and exploitative range of films that to this day are still copied and inspired from. The art displays schlock such as “Color me Red” to more obscure titles such as “Living Venus” and “The Prime Time”. This section is alot of fun tempting you the whole way to seek out some of these cheesy greats from long ago. Of course, I’ll stick with my favorites such as “Wizard of gore” and “The Gore Gore Girls”…great stuff!

“The Crimson Ghost” ends this round with a tasty color poster to drool over! 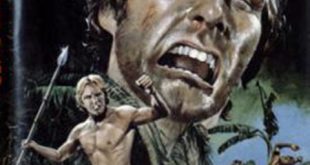 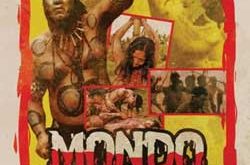