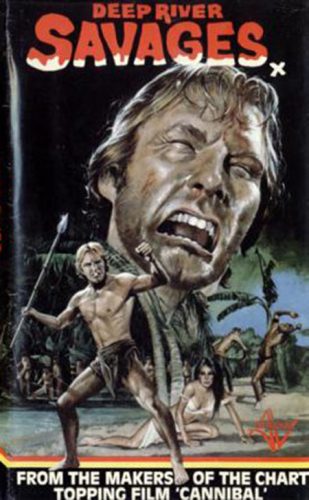 A photographer is taken prisoner by a cannibalistic tribe while on assignment to shoot photos of the local wildlife. After enduring several acts of torture at their hand he soon becomes a member of the tribe, finds love, and assists them in their ongoing war with a rival group of natives.

Having seen the infamous Cannibal Ferox (AKA Make Them Die Slowly) when I was a kid (after hearing several of my classmates talk about how messed up, brutal, and disturbing it was) I went into Man from the Deep River (Aka Sacrifice!, aka Deep River Savages) expecting much of the same considering that they were both directed by Umberto Lenzi. Strangely enough though that wasn’t quite the case.

Don’t get me wrong, it had some pretty violent and screwed up stuff going on (and unfortunately some animals were actually killed during the making of it, something I find unacceptable) but for the most part it was a lot tamer in comparison. I think that Man from the Deep River was a lot better for a number of reasons though and in addition to having more of a plot I also thought that it was actually a little touching at times and there is a scene that takes place toward the end that can only be described as utterly depressing. Even though Cannibal Ferox gets a lot more attention I thought that it was by far the inferior of the two films. I really enjoyed this movie and think that it deserves a lot more attention than it gets for a number of reasons.

While it may be considered a horror film at heart it is actually a warped love story of sorts. Our main character John Bradley is captured by a tribe that has cannibalistic qualities and even though they do a lot of horrible things to him at first it isn’t long before they basically accept him as one of their own and he starts a relationship with Maraya, the chief’s daughter. I genuinely enjoyed watching their relationship develop and at the risk of sounding like a giant softie there was just something sweet-and poignant- about the whole thing. I thought that they made a very cute couple and I just couldn’t help but root for them and wanted them to live happily ever after together.

I won’t spoil anything regarding their relationship and how things end up between them because I don’t want to ruin anything, but let’s just say that you may just need to keep a pack of tissues handy after everything is said and done because you are definitely going to need them. I personally thought that they had one hell of a love story and it more interesting than most of the ones that you will see in your typical romantic comedy. Without a doubt my favorite thing about the movie was their relationship and this is due to the fact that you actually care about both characters because they are both extremely likable.

I just felt that the movie had some very strong writing which also added to my enjoyment of it. Much like Cannibal Holocaust it actually has a pretty deep message and isn’t just 90 minutes of the people in the tribes brutally slaughtering and eating their victims. I was actually pretty surprised by how much is going on in the movie and how deep it is since I was totally expecting it to be pretty much devoid of plot. Instead it is a well-written little movie that has a lot of heart and it will really make you think as a result. I’m not going to lie; it will stay with you long after you have watched it and if you ask me that is always the sign of a great movie for a number of reasons. I will warn you though, if you are looking for a hardcore, straight out horror film you may not want to take a chance on this one as you are going to most likely be disappointed. On the other hand if you are in the mood for something a little different that gets the old mind working it may be just up your alley.

As I mentioned before I also really dug the characters. I thought that John Bradley was awesome and that Ivan Rassimov did a great job bringing him to life. He is a complex, realistic character and I think that a lot of viewers will really like him as much as I did. I love the fact that for most of the film after he is captured he makes several attempts to escape but once he has the perfect opportunity to do so he has second thoughts as he has become quite accustomed to his new life with the tribe. He makes a certain choice at the end of the movie and while some viewers may not agree I think he makes the right decision (I think that I would do the same thing he does if I was in his situation but I’m not sure). I also really liked Maraya ( Me Me Lai) as well and thought that she was a perfect match for Bradley for a lot of reasons. One of the best scenes involving the two is when they consummate their relationship. There is just something special and comforting about it (hey, I guess I am a romantic at heart, who knew?) and it just made me feel all warm and fuzzy inside as I was watching it (good Lord, what is happening to me? Do I indeed have a heart after all? I would have never guessed). 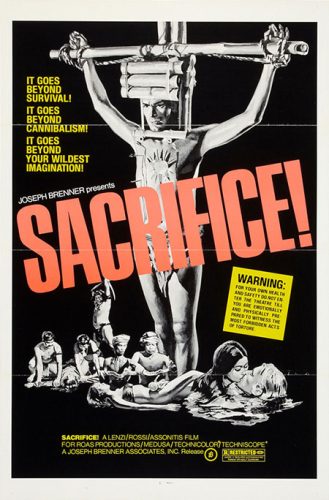 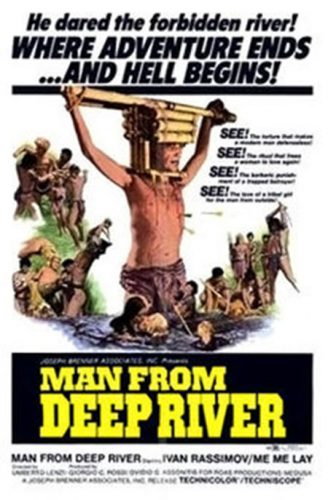 As you can tell I really loved Man from the Deep River. Something about it just really spoke to me and there is a lot to really enjoy about it. I found it to be interesting, exciting, powerful, haunting, and just plain sad at times (the thing with the black butterfly and what it foreshadows really depressed the hell out of me) and I don’t think that I will be forgetting about it anytime soon. I was very impressed by how good it was and even though I am hesitant to call it a cannibal-related horror film I think that anyone that enjoyed Cannibal Holocaust will also be a fan of this movie as well (then again I am not exactly sure that I would call that particular film an actual horror film either to be honest). Check it out if you are lucky enough to find a copy of it as you will not be let down. Highly Recommended!