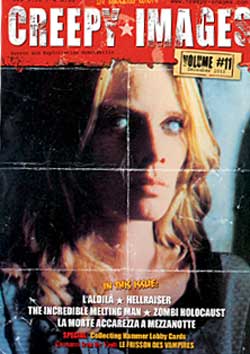 At long last, another fine issue of “Creepy Images” has emerged from the dark abyss to present its wonderfully color pages with full bloody gory. Speaking of blood, you must know I’m referring to the intro section that feature not 1, but 16 bloody lobby card stills form the film “The Melting Man”. The formal title here is “Der Planet Saturn Lasst Schon Grussen”, but you can see why I prefer the simpler Melting Man title. In any case, lots of slimy body parts and bloody melting images that could give “Return of the Living Dead” a run for their money.

L’Aldila, spots a nice poster image from the Lucio Fulci collective. Americans might better recognize this as “Zombi 2”, though “that” whole discussion on Zombie sequels from Fulci is best saved for when you are ready to dive into much confusion. Lobby cards on this one show some nice stills from this old school film. Following that is a film that reminds me of the more violent exploitation films form this era. The US name was released under Mondo Macabro”,its Spanish name is best left to print. These images emanate a nice contrasty hue of yellows and muted reds.

“Zombi Holocaust” is a returning entry with some new (old) lobby cards that nicely illustrates the weird zombie makeup these “things” had to endure. Of course, there is some edgy gore to indulge in while trying to decide if these things were zombies or alien mammals of sort? Well unique is a better classification!

My favorite section though comes from the movie Hellraiser. These stills are simply brilliantly perverse with their bloody cenobium fetish garbs that echo the twisted psyche of Barker, its creator. In fact, I recognize a few that I happened to purchase at trade shows way back in the “day”. 2 less common posters can be taken in and appreciated for by loyal HR fans.

So where does this take us? A later chapter details a bit a bit the “Senor Lobo” book release and its production aspects. This moves into another feature article on collecting Hammer Lobby Cards, though while visual…..this section has the collectors in mind with some nice historical based info.

Last but not least is a couple pages of “Sexual Terror”! Bonus!
Eat it up! 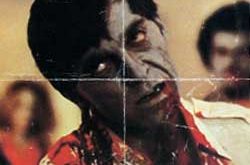