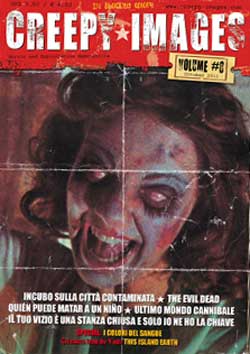 Giving appropriate tribute to a great but not forgotten classic, the new issue of “Creepy Images Magazine” features “that” glaring image of the “girl possessed” from the film “The Evil Dead“. Yep, you guessed it…more exploitation memorabilia to gaze upon from this unique (and compact) little horror mag. Romero’s impact must seem never-ending to fans of this generation. Creepy Images seems to present with each issue another foreign title that stems from this very influence.

Though no sooner are we into the “Evil Dead” section with plenty of unnerving images of Ash and his house demons. The film was marketed as “Posesion Infernal” which just doesn’t have the same ring to me as its original title. Though 1983 brought some great times, and this film was surely one of them.

Flipping ahead we have yet “more” titillating images from “Mondo Cannibale” which tends to embrace its exploitation in the showing of men and women’s “junk” wrapped nicely within some hearty memorable gore moments. Though in the case of these images….we get more “junk” showcasing than intestinal glorification.

A smattering of images from one of Sergio Martnos Giallo’s creations is presented with its beautiful lobby cards. I wont bother “trying” to type of the name of this one since it seems to be a sentence of its own. From what I can tell..lots of choking and knife play here to look upon.

This issue highlights the history of Italian movie paper in a more extensive article. This is explained in more detail with a historical article on the trends and movements of advertising of those eras. The “press book” and “brochures” of the 70’s are explained as to be “hard to come by” due to their limited releases. Artistically there are some great paintings and 1 sheets that deserve framing for the works of art that they are. Readers can dig more in the details here and the trends of multi sheets, quads and what not.

This issue ends on “This Island Earth” with some tasty stills and poster art to keep the retro hunger alive for memorabilia afficiados. 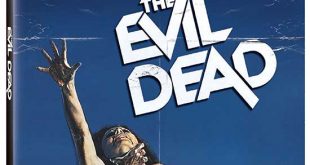