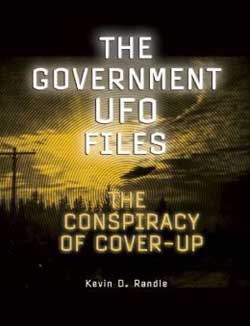 Those 3 words that seem to re-surface time and time again should be plenty well familiar to us by now. It seems that as long as we are forced to stay in the dark on UFO reports and strange sightings that suggest otherwise, it is the voice of authors and publishers that continue to present the evidence and stories usually kept under wrap.

Visible Ink has long been one of those provides in the publishing circle of conspiracy materials and UFO information gathering. Author Kevin D Randle himself has authored an impressive array of books on the subject. As a former US Army lieutenant Randle is one source who we can’t ignore. a master of psychology and military science, Randle seems like the prime resource to deliver content that might have otherwise been kept classified and far from public review.

As information is slowly released in smaller amounts, we are discovering more and more proof that agencies such as the FBI, CIA, NASA, FAA and Military have been doing actually this since the “beginning” of reported sightings. The book “The Government UFO Files: The Conspiracy of Cover-Up” presents several incidents and stories of UFO and conspiracy origin that have been a part of this growing circle of cover ups. Cases are examined with report quotes and  analytical breakdowns presented by the author. Randle tries to make the distinction between fact and the growing phenomena of conspiracy stories that in themselves might be “out of control”. Conspirators will gain some much needed insight.

In content, the book examines subjects such as “Foo Fighters”, “SETI protocols”, “Silver Disks”, Mountain crashes”, Ghost Rockets”, “The Cisco Grove cover up”, “Project Blue Book” “Fireballs” and even those mysterious “Men in Black”. The book is designed to present specific sighting incidents combined with government agency standards. Re-scrutinized, Randle looks into their protocols and practices that might stand in the way of information being released to the public.

As I review the variety of content themes, it is very apparent that much has been kept secret for far too long often dating back to the 50’s and 60s. Readers will learn more about some of these information source such as “Project Moon Dust” and presumed official investigations. Randle has compiled a great amount of material that can now be digested in proper doses thru the Visible Ink team’s talented design and formatting efforts. The book itself is a great companion piece to many of this publisher’s other releases such as “Real Encounters”. “The Government UFO Files” is a sister release to Randle’s previous book titled: “Alien Mysteries, Conspiracies and Cover-Ups. Conspiracy enthusiasts will love the new volume as well as those who believe we are not alone.