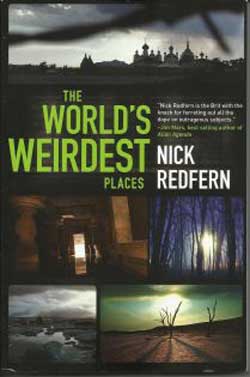 Author Nick Redfern has created “quite” the library of seeking out information on conspiracies, UFO’s, NASA and even “Men in Black“. His latest book serves as a virtual tour guide into some of the “weirdest places on Earth”. As it is stated, these are not necessarily spots focused upon 1 event, but locations that have had their share of history whether it be metaphysical in nature or that of past local myth. If you consider yourself a serious world travel, then this could be a great source for traveling to places that are more noted for their “fringe inclusion” into history. Certainly you have heard of the “Bermuda Triangle” and even “Death Valley” for that matter. Though maybe your a bit more curious as to what those locations mean in terms of unexplained events or UFO sightings.

Redfern has collected his share of historical data to make each of these small chapters as informatively speedy as possible with great tidbits about what has transpired, why it should be in this book, and why you might (or should) have more than a passing interest in its surroundings. Redfern visits all sorts of noted odd spots that (despite the more noted ones such as the “Bermuda Triangle”) have had their share of great historical mythologies circulating about.

“Devil’s Gate Dam” for one, is a much less known area that carries stories of Jack Parson’s dark history. The location which houses a rather odd looking “demon” rock has had years of occult affiliations, deaths, suicides and serial killings. As with many in this book, it’s not 1 thing that marks the location as a being odd, it’s the years or series of events over the years. “Devil’s Gate Dam” which formerly served as a ritual location for Parson, a follower of Crowley, reports years later the unnerving feeling the location instills upon visitors. One visitor reported seeing a bizarre winged demon-like creature jumping among the rocks.

Jefferson, Texas is an area famous for a few haunted hotels. One of which was personally experienced by Spielberg himself. And while our libraries have no shortage of haunted location books, these locations are privy to other anomalies such as the Big foot sightings also bearing close association with the hotels of Jefferson.

Bermuda Triangle is well documented as an off kilter location that seems to range in the unexplained disappearances to time travel to a more scientific explanation of magnetic filed disproportions. In any case, this location which sits within the North Atlantic ocean has ben the focal point of films, novels and TV shows. A weird location that can’t be ignored from this collective.

Kremlin Moscow, Russia provides many stories of dark times that include the ghosts of “Ivan the terrible” and “Alexander the IIII”. Lenin, Stalin..all the baddies, produce a paranoid feeling of ghosts that still haunt much of the area. The area is also reported to have delved in UFO activity. But unlike our US locations (which are quickly discovered and covered up), there eminates reports of past plans to invoke terror within the states by planting a fake UFO crash filled with deformed children. Yep, it’s crazy stuff (that’ll makes you scratch your head more than once).

Roswell almost goes without saying to be a prime location for weirdness. The 1947 crash being the pinnacle event that has kept the town alive with tourists ever since. Though it’s not the “only” disturbance that effects the town as years have uncovered other reports of spectral events and hauntings. In any case, for this area it’s the big-eyed grays that will capture most of your attention.

The book carries forth with several more locations of interest. Some like Loch Ness or Sydney, Australia talk of one of mroe strange beasts that have been reported. By sea, land or even air….these reports describe things that fall outside our species realm forever sending a wonder of mystery for the locales.

“The World’s Weirdest Places”, marks another fine achievement for author Nick Redfern who keeps our nighttime stands occupied with the ongoing creations of books that peak our curiosities and give us new stories to tell. Perhaps this book will accompany me once or more as I venture forward myself to see what all the hub-bub is about. Those who delight in metaphysical TV shows, will relish in having a new guide book that takes you to places far and wide with plenty of weird news things to investigate.