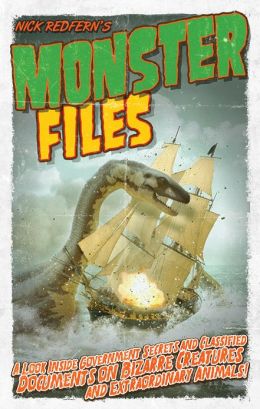 Monster Files: A Look Inside Government Secrets and Classified Documents on Bizarre Creatures and Extraordinary Animals

From the creator of several fringe subject matter books arrives a new edition titled “Monster Files: A Look Inside Government Secrets and Classified Documents on Bizarre Creatures and Extraordinary Animals” (wow..now that’s a mouth full!). Nick Redfern is certainly a busy writer these days sometimes creating books faster than I can read them.

This one in particular will be of interest to horror genre fans and readers of strange conspiracy-rooted beasts. Taking a slightly different tone this round, Redfern documents his chapters more like small stories telling us of days long ago (and present) that tell strange tales of odd creatures uprooting time to time.

To add to that agenda, we get plenty of information on documented cover-ups and clean up crews that have quickly descended upon several of these events to cover up evidence and items in question. One such event documents the Mt. St Helens eruption that details the arrival of military vehicles that are reported to have scoured this Big Foot heavy area for creatures that might cause controversy “if” discovered. How about the use of ESP and the study of animals that the Russians are reported to have delved in? (Does this mean I can finally talk to my cat?)

There of course is the Big Foot himself that some say is now under the care of the Pentagon on ice for observation. Or was it that abominable snow creature? Yep, he’s in here as well! While each of these stories raises the bar and the question of species that have gone onto legend status, they also expand how culture has changed thru the years and how things may have been misunderstood in some of these circumstances. Sea Monsters are indeed a controversy of past generations that claim to have seen monsters of incredible size.

I believe the potential is there especially after watching numerous episodes of the TV series “River Monsters” which pull in scary Sea creatures that are caught and “proven” to exist. We still have alot to learn but why these top liner creatures have been taken off radar is perhaps the biggest mystery of all. Redfern takes the time to discuss government agencies who still believe that its better to hide the truth than reveal it. Probably the most revealing has been the full disclosure agenda that has loosened its reigns overseas.

To inventory things a bit, we are told of Yeti, Sasquatch, Owl men, hybrid apes, moth men, mermaids (hence the recent publicized documentaries!), flying bird like things, and even a “phantimal”?? Though that just scraping the surface as this separation between secrecy and odd things is brought into greater perspective.

Readers will enjoy the mix of lore and realism that brings the idea of TV show GRIMM, into a light that is not that far off as we might assume. With over 260 pages, this New Page Books release is a perfect lunchtime read to give you more reasons to fear the dark. What’s it all mean? I’m not sure but its good to know that their are writers out there such as Mr.Redfern who are determined to uncover it all!