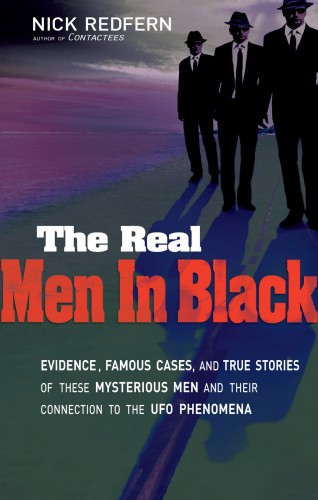 THE REAL MEN IN BLACK

When I hear the term “men in black”, I am often reminded of film fare, paranoia and a simplified classification of government agencies who send out agents to investigate reports of interest. We certainly had our share of X-files, Millennium groups and tv show personnel who dressed in a similar manner that we knew what others were talking about when speaking of such characters.

However, I must confess that I never gave it much more thought than that. It was upon reading this latest release titled “The Real Men in Black” by author Nick Redfren that I was instantly transfixed on much more supernatural origins of something that was revealed to be more than just fiction. As the pages turned, it was apparent that maybe I hadn’t looked into this subject as much as it deserved.

I found it fascinating not by definition but by the accounts of frightened men, and curiosity seekers who had such encounters with these MIB as they are being called. No, not an episode of “Fringe”, or a covert operation that flew below the government radar, or even a fashion-call that set a rather drab dress code into place….but perhaps something darker, something mysterious and maybe even alien. It was these inclinations that had me hooked like if I had just experienced my first David Lynch movie. The reports that document this book claim to be real and claim to be driven by fear from these almost creature like entities. The book is well told in that it paints a picture of men who seem to defy logic and simply appear to warn others “not to disclose the information” they have uncovered. Not only does this dream up visions of alien agents, but to the extent of unnatural creatures, watchers of time or something far more unsettling and beyond comprehension. The book gives us plenty to work with an make our own choices.

As I ventured forward I found myself unable to put the book down. I think it’s the combination of fear and suspicion that fuels my interest in these men of black clothing. We hear tales of how they surfaced during the Moth man events, we hear of famous writers who became too close to material that drew them out of the wood work, we hear of sightings, characteristics and an odd affinity these agent-like men seem to induce into those they encounter. I began to question, why would anyone think anything BUT a government or like agency? So they wear odd hats, glasses and a clean company suit….why the fuss? Though as the stories piled up, so did the nature of these individuals that seem to have a weird connection with the unexplained events of the world.

They say that truth is stranger than fiction. Since this release is based on real accounts, that idea has come full circle in the form of these MIB’s. My own theory is that because the nature of these men are to intimidate, scare or just freak-out their visitors, it has kept those in contact on the most part silenced thru the years. We are in a new age now, where information is shared on a daily basis, where transmissions are as fast as a keystroke and that our sci fi intuition is at its peak with reports of new discoveries and age turning events. Perhaps the MIB have stayed elusive, perhaps they’ve been softened with Hollywood movie magic….however, as you read from not 1 but several encounters from several individuals you have to step back and really question the nature of our existence, our visitors, our secrets and these tiny slips in information that warrant a visit from intimidating if not blatantly threatening pale skinned men who at times have defied the laws of nature. This is not a UFO book, it is perhaps proof that something greater is at work ALWAYS. The real question comes in the form of “what next??”. A highly almost indirect awakening in the form of literary magic.