Home | Gear up to Get Bedevilled! Well Go USA Brings to Bluray

Gear up to Get Bedevilled! Well Go USA Brings to Bluray 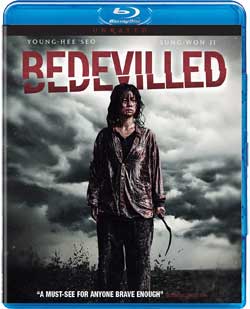 Yeong-hie Seo (The Chaser) and Seong-won Ji (Harmony) star in Director Chul-soo Jang chilling first feature BEDEVILLED, debuting on Blu-ray™, DVD and Digital October 9th from Well Go USA Entertainment. When her pleas for help are ignored and cause her daughter’s death, a woman seeks revenge on the person she blames. BEDEVILLED won the Audience Award for “Best Film” and Seo Yeong-hee was named “Best Actress” at Austin’s 2010 Fantastic Fest. In addition, the film was awarded the Grand Prize as Best Film at the 2011 Gérardmer Film Festival and Yeong-hie Seo won “Best Actress” at the 2011 Fantasporto International Fantasy Film Award. Bonus features include a behind-the-scenes featurette.

A gorgeous woman takes a forced vacation to a strange, beautiful island. She befriends a pretty girl shocked to find out she is treated like a slave by locals and has attempted to escape the island. Can they both get off the island alive?

BEDEVILLED has a runtime of approximately 115 minutes and unrated.