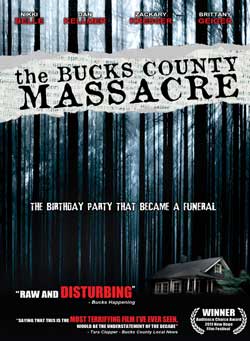 “The Bucks County Massacre” was compiled from video footage found at the scene of a horrible crime. The editors would like to express their sympathies to the families of the victims. They would also like to express their gratitude to the local authorities for their involvement and cooperation on this project. The public release of “The Bucks County Massacre” is done with the express consent of the families of the victims and all authorities involved in this case. It is the hope of all involved that this truthful rendering of the events will bring forth new witnesses or information that will allow for this case to finally be closed.

A group of friends get together for a 25th birthday party at a remote house in Bucks County, Pennsylvania. After someone goes missing and the police search the
premises to no avail, the remaining party-goers are left to wait until morning. With virtually no cell phone reception and no land line, the situation escalates
when one frantic friend takes matters into his own hands and ventures off in the woods to find his girlfriend. What they don’t know is that someone or some thing
is hunting them one by one

It’s no secret that I am a fan of the documentary-style of filmmaking. When done effectively, like the many one-take, 10+ minute shots in “REC”, I consider it to be a very powerful tool. When I went to the website for Bucks County Massacre (also known as “Bucks County“) and saw the proclamation, in a severe Roger Corman-like scrawl, that this film is the amalgamation of three heavy hitters in the cinema verite genre, I was skeptical that this tool had been put to good use. As it turns out, my skepticism was warranted. 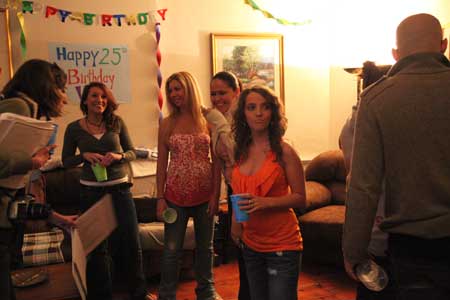 The movie starts out like Cloverfield did – with a party for a dear friend being documented for posterity -but the similarities end there. The film drags on a bit before the action starts, similar to all three installments of the Paranormal Activity franchise, but there was nothing that reminded me of the creepy subtlety that makes those films work. Finally, the only thing Blair Witchy about BCM is that it is done in the documentary style. So right off the bat, the tagline on their website isn’t exactly accurate. 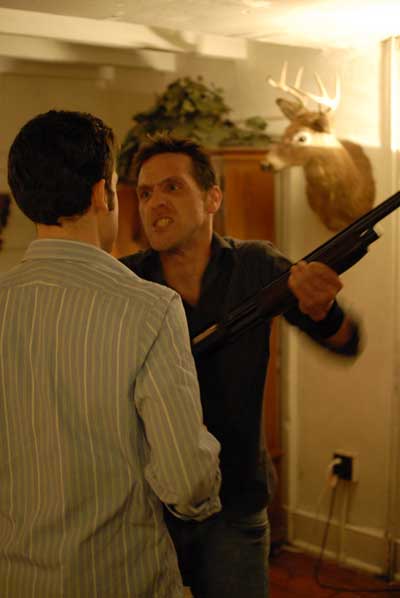 This is clearly supposed to involve you in the characters’ plight and build tension, but then it returns to more ambiguous party footage that doesn’t move the film forward at all. I found myself getting bored. That may seem kind of harsh but it took about 36 minutes before the first real incident took place, and the movie is only 83 minutes long. After that there is 17 minutes of “someone is missing”, then 11 minutes of “searching for and speculating about someone missing”, which leaves 19 minutes to wrap it up – which they did with something I feel like I read in a Jack Ketchum novel on a couple of different occasions. Have you seen Offspring? 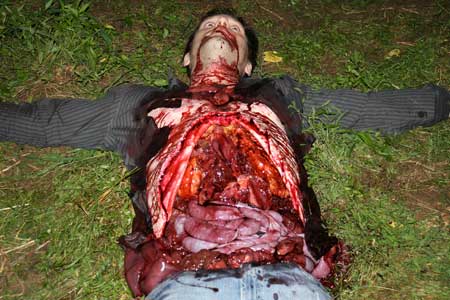 The bottom line is that this genre has a whole bunch of haters. I’m not one of them, but I do think Bucks County Massacre is the kind of film that makes people hate the genre. It’s not a lot of payoff for the time and attention invested. In the films mentioned in the tagline the audience was rewarded with a lost and scared giant alien in Cloverfield, a mysterious evil with a personal agenda in the P.A. films, and the privilege of witnessing history when having their minds blown by the innovative Blair Witch Project. Bucks County Massacre provided me with none of that. Perhaps the tagline should say “About as good as ‘The Last Exorcism!” and leave it at that.