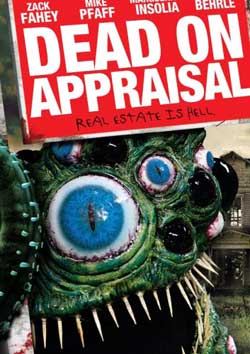 A Realtor must sell a house where every new resident dies under strange circumstances.

“Dead on Appraisal” has become my all-time favorite, low budget horror movie because of the sheer insanity factor that gets kicked up here.  The plot revolves around real estate dealer John Dante who’s trying to unload a house with a crazy history of murder and weirdness told through a trilogy of far out stories, the first and third of which have comedic undertones while the second one takes a more serious path.

“The Morning After” finds the joint occupied by a bunch of young kids that just wanna party but find themselves fending off a home invasion as well as some kind of monstrous, bug invasion hatched in one of the back bedrooms. 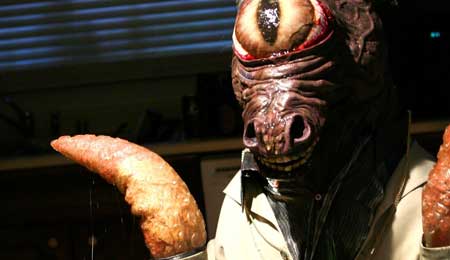 The first story set the tone for the rest of the movie and drew me in.  On the downside the acting is stiff and in some cases bad; some of the background music doesn’t fit particular scenes and I’m still trying to figure out why a home invasion angle was included; it didn’t fit in and stuck out like a sore thumb.  The monster and gore effects are pleasantly over the top which sometimes subtracts from a movie but here it’s a perfect fit.

“Fatherland,” is the story of a soldier returning home to stay with his father changed by what he saw during wartime Iraq.  Concerned for his welfare his father calls a friend of his who happens to be a psychiatrist and former vet to talk to his son suspecting he might have PTSD but to no avail.   Eventually the young man commits suicide with a knife to the gut.  The father notices something odd inside his wound.  A bomb had been surgically placed inside him.  It explodes killing the father. 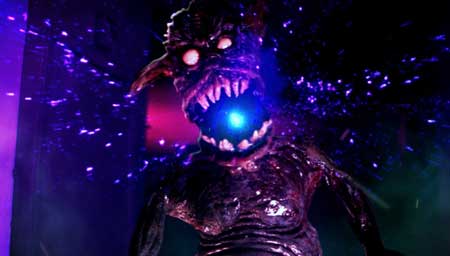 Of the three stories this one is my least favorite but it works.  We also get a glimpse of the demon that lives inside the house via its silhouette on the wall by the corpse on the couch with the implication that this creature has been manipulating or influencing inhabitants of the house, past and present.

The third and final story concerns the whacked out singer of a death metal band, “Freddie and the Goblins,” who moves into said house after his cousin died in it.  His aim is to make the most extreme music mankind will ever know.  The heart of the story begins during a poker game with his bandmates. 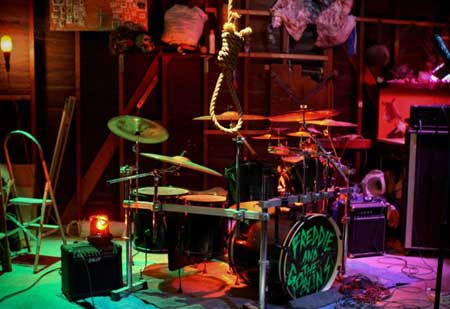 Each time a guy gets up to leave the table a monster sits down to take his place.  Freddie has no clue if this is real, in his head, if he’s being pranked, he doesn’t know.  The uncertainty drives him crazy leading him to kill all of the monsters.  As he makes a 911 call to report what has happened the creatures revert to human form again.  He hangs up the phone.

His undead bandmates suggest they do one last show together and finds himself on stage performing while the demon that lives inside the house watches the gig. When the cops arrive Freddie is insane, babbling.  He gets up, reaches for a gun and is shot dead.

The final few minutes of this movie are beyond spectacular.  As if the entire movie hasn’t been a blood soaked, gore infested thing of beauty these next few scenes escalate the awe factor from 6 to 666 to the tenth power.

Sarah, John’s girlfriend, is hosting an open house to help sell the place.  What follows is the most intense, insane moments I can remember seeing in a movie since I first saw “Evil Dead II,” “Reanimator,” “Bride of Reanimator,” and “Hellraiser II.” 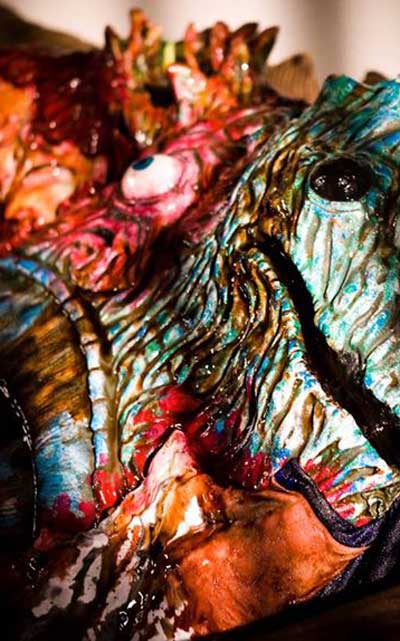 The demon shows himself and slaughters the entire group, beheading and dismembering everyone to a brutal black / death metal soundtrack resulting in the decapitation of Dante.  The demon, laughing maniacally, escapes through a dimensional portal all the while holding Dante’s severed head, end of movie.  You have to see it to believe it, I’m not making this up and it works, that’s the best part.

I’m definitely recommending “Dead on Appraisal.” It’s the kind of flick you can watch with friends and beer on a Saturday night and looks great in any horror movie collection, book ended by “John Dies at the End” and “From Beyond.” 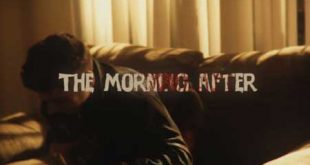