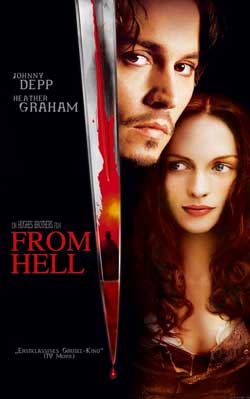 In Victorian Era London, a troubled clairvoyant police detective investigates the murders by Jack The Ripper.

From Hell is a 2001 movie that tells the story of the Jack the Ripper murders. The film is loosely based on the graphic novel by Alan Moore and Eddie Campbell and follows the character of Fredrick Abberline as the films protagonist. From Hell is an interesting interpretation of the Jack the Ripper story going into Royal conspiracy and building on an atmosphere of gory legend. Much like the source material, the movie does a good job transporting the audience to the location of Whitechapel England in the Victoria era.

Mary Kelly, played by Heather Graham, is a prostitute in Whitechapel England. She and a group of prostitute friends go about their day to day drudgery when one them is kidnapped. Then, one-by-one, they are murdered in horrific fashion by a murderer known as Jack the Ripper. It is up to inspector Fredrick Abberline, played by Johnny Depp, to catch the killer before more innocents can be killed. Soon they are drawn into a conspiracy involving Freemasons and the Royal Family.

From Hell is a beautiful movie. The filmmakers did a wonderful job capturing the grim world of Victorian era England. The camera work and stylized shots are very artistic and really make the movie seem dark and deep with a sort of nightmarish essence through every shot. There are numerous references to the fact that this is the Victorian era. Things like a Buffalo Bill Wild West Show pamphlet or having John Merrick, The Elephant Man, make a cameo appearance might seem clever on paper but on screen it takes you out of the movie. It felt like these sorts of additions were there simply to hit the audience over the head with the time period.

Heather Graham is noticeably bad in this movie. Her cockney accent is not on point at all and she seems to be struggling with portraying basic human emotions. Johnny Depp is not much better as he mumbles in a sleepwalker’s haze through his performance. This movie owes much to the talent of the character actors that make this movie watchable. Robbie Coltrane, Ian Holm and Jason Flemyng all give dynamite performances that pick up the slack that the leads cannot seem to carry.

The story itself is intriguing enough but there is very little reason for the lead characters to even be present. For some reason Fredrick Abberline is a psychic. This seems pointless as this ability does not allow him to save anyone from Jack the Ripper and it does not lead to him catching the killer. In fact the killer, once questioned, confesses everything in a greatly over-the-top fashion makes the visions Abberline have even more bizarre. Also the killer goes from zero to psychotic in seconds flat. There was no telling as to why the insane switch was pulled, but when it was the killers eyes go black and he rambles insane nonsense as if he is evil personified, which is a touch out of character but it is nevertheless entertaining to watch.

The romance between Abberline and Mary is forced at best and the conclusion that is derived from it is not earned. It felt like a needlessly tacked on happy ending. Even the details of Abberline’s previous marriage and his wife’s death seemed like subjects that were tacked on to emotionally manipulate the audience rather than create a fleshed out character. It would have preferred they leave him out completely if they cannot make a character that is developed beyond a cop with a chip on his shoulder. 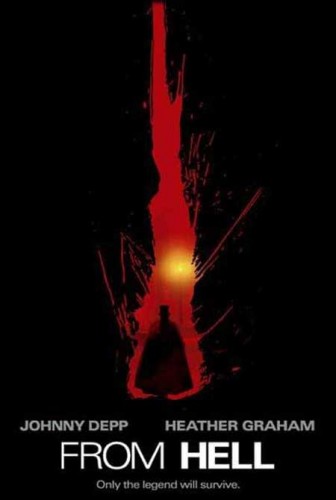 From Hell is a good movie for a rental. It showcases a creepy atmosphere and scenes that are gritty and haunting. While the effects are dated and a bit silly, it is still one of the better movies featuring the subject of Jack the Ripper. The conspiracy sort of falls apart if you take a moment to think about it. It is still an entertaining movie that has a gothic feel that will linger with you days after viewing.