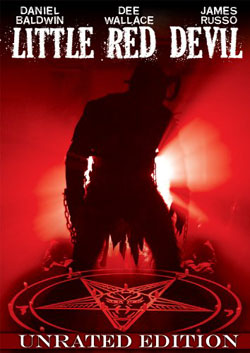 Jimmy is a twenty-five year old loser who lives with his Bible-thumping mother (who was actually a devil worshiper when she was younger). He spends his days stealing from others, banging a hooker, and searching for his long lost girlfriend who just seemed to fall off of the face of the Earth a year ago or so. Jimmy eventually crosses paths with a Luc Tyler, a local crime boss who takes him under his wing and promises to help him find his missing girlfriend. Unfortunately for Jimmy Luc isn’t quite what he seems and not to give anything away here, but the name of this film isn’t “Little Red Devil” for nothing.

It was hard for me to write a review for “Little Red Devil” because to be honest I’m not really sure how I felt about it. I didn’t love it and I certainly didn’t hate it, so I guess the only thing that I could really say about it is that it was just so-so. There was nothing really that special about it and about an hour or so after watching it I had already forgotten about most of it. In addition, I’m not real sure what film category I would place it in. It isn’t really horror, it isn’t a suspense/thriller, and I wouldn’t even consider it an action flick. It may have elements of all three, but in the end I am not really sure what I genre it falls under and I don’t think that the filmmakers knew either.

The movie is very slow-moving and quite boring at times. It starts out well with a woman having sex with Satan (really! I’m not kidding here!) as a group of cultists stand by watching. Apparently Satan doesn’t like having an audience while he’s getting laid because he ends up slaughtering all of the onlookers and leaving the woman terrified. The film then jumps 25 years to the present day and are introduced to Jimmy, whose mother was the woman that the devil had sex with all those years ago (of course making Jimmy Satan’s son). Pretty much as soon as we are introduced to Jimmy (played by Jim Lewis, who looks like he could be Jerry and Charlie O’Connell’s brother) the movie starts to go downhill as I just don’t think he is really that interesting of a character.

We are treated to several yawn-inducing scenes in which we get to see how Jimmy spends his days (he has sex with a just OK-looking hooker, he hangs out with a loser friend, he argues with his mother, etc). I think that Jimmy has a pretty boring life and I really don’t care what he does all day to be quite honest. After a very slow start Jimmy and friend end up breaking into a house to steal poker winnings from a man who looks like a white-trash Wolverine.

They end up discovering that the man has a little boy locked up in the basement for some unknown reason and before they can leave with the boy the man ends up attacking them and Jimmy’s friend is killed in the altercation. Jimmy is saved when Satan shows up and brutally hacks trailer park Wolverine to pieces (I guess it would be kind of cool to have the devil as a guardian angel) and he leaves with an Satanic-looking amulet that he found in the man’s basement (the same amulet his mother is wearing at the beginning at the movie when Satan is having his way with her).

Jimmy then for some unknown reason takes the amulet to a sleazy club so he can sell it to local crime boss Luc Tyler (Daniel Baldwin, who was obviously stoned out of his mind the entire time the film was being made). The two strike up a relationship and in return for Jimmy working for him Luc agrees to help him find out what happened to his girlfriend. The rest of the movie is basically Jimmy running around trying to find out what happened to her while Luc sits around smoking and trying his best to look cool. There is a twist at the end that you will see coming a mile away and by the film’s conclusion if you are like me you will be feeling thankful that the movie is over.

I’m still not really sure what the point of “Little Red Devil” was. The plot is all over the place, the acting is pretty bad (except for Dee Wallace, who always delivers), and it is just plain boring in general. I don’t think that writer Robert Foreman put much effort into the script and as a result the film suffers (I still have no idea why the sub plot about his girlfriend was even part of the movie as it is pointless and pretty much goes nowhere). As I said earlier, I didn’t hate this movie but I do have a hard time recommending it to anyone at the same time. I found it to be too long, predictable, and quite boring, but some people may dig it. Check it out at your own discretion.