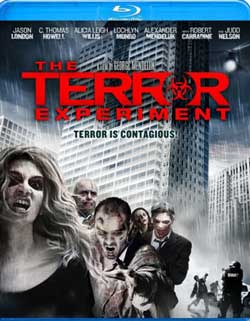 In a shocking act of domestic terrorism, a deranged veteran detonates a biological weapon inside a crowded Federal Building. His purpose: To expose the government’s secret development of a toxic gas that instantly affects the human adrenal system, causing men, women and children to become inhumanly aggressive and violent. Now the virus is spreading. The building is quarantined. And on the upper floors, a small group of uninfected survivors must band together to get out alive.

Another seemingly ordinary day for the folks of this office administration. They return to their day to day, return to their cubes and ride on treadmill they are designed to run. Despite relationships in progression, work detail repetition and the looks of those who know their place, a few things are different today. A curious woman triggers a metal detector but is let thru without question as she picks up her gun. A man carrying a birthday cake seems curiously un-enthused. 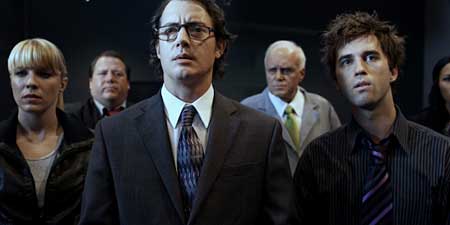 “Terror Experiment” takes on a theme that fits nicely within its niche of viral outbreak fears and terrorism. Take that one step further and maybe add some fiction involving a convert operation that wishes to purposely unleash some yellow mist that turns normal everydays into raving nut bags. This is the material of “Terror Experiment”, but their is a wizard behind the curtain. 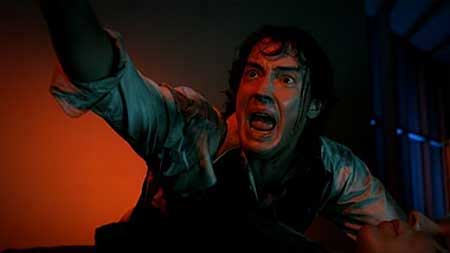 Viewers will comfort in a few familiar faces, giving the film some credibility in the acting department. C Thomas Howell is in the house sporting his new familiar look of playing a militant head or General (does it seem like he plays this role alot these days???…I’m thinking its the mustache and starved aging look that works for this re-occurring character placement.) Then we’ve got Jason London in the role of “Cale”, Robert Carradine playing  Dr. Wexler and Judd Nelson playing the mysterious government lackey Agent Wilson. 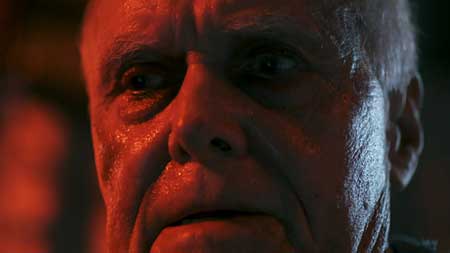 “The Terror Experiment” was originally titled “Fight or Flight” but most likely changed due to the lack of genre appeal. The film does has a small share of zombie-like attacks that occur once the sane have turned into maniacs by way of adrenalin system overload. As we are told, this state is irreversible due to the chemical overtaking them once infected. The attacks and kills are somewhat PG-rated with the exception of the occasional gut puller or eye jab (Note: it felt like these were scenes that may have been added to give it a bit more adult driven interest) 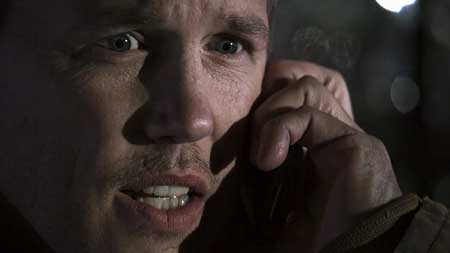 Cale and a few others were lucky enough to have escaped the mist by being above the floors that were infected. The problem is, they have to go down to get out. Mandy played by Alicia Leigh Willis becomes a much too anticipated love interest as the film winds down. Though it seems to conflict a bit with her intro persona which seemed like it would be more hero than victim. All the while, the government agents talk in secret above a cover-up of this terrorist war concoction bio-weapon designed to take out our enemies by a simple drop and run. 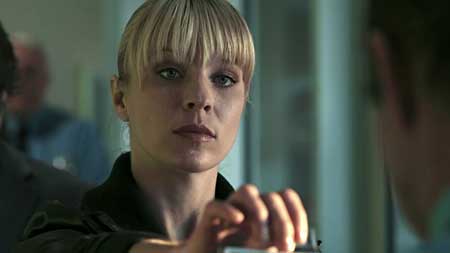 The film was directed by George Mendeluk who has directed quite a few films (but most I’ve yet to see) “The Terror Experiment”, never succeeds in getting to the level of a film like “The Crazies“. Bio weapons, conspiracy and walking maniacs sounds like a good thing when its doesn’t entirely correct. A film like “Resident Evil” is a better match for this scenario. This film some times feels rushed, other times it feels like a after noon TV movie. It’s still good to see this group of actors who were more known for their teen work, however there are a few thrills in this one that might just work for your needs. The Terror Experiment is not an experiment that fails, but also never really excels to top line material either.