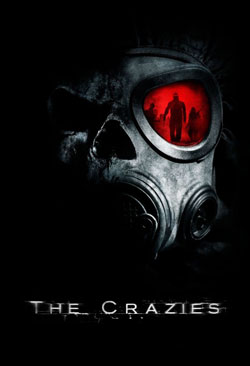 As a toxin begins to turn the residents of Ogden Marsh, Iowa into violent psychopaths, sheriff David Dutton tries to make sense of the situation while he, his wife, and two other unaffected townspeople band together in a fight for survival

I am a remake hater. I don’t hate the fact that remakes are made. I usually just hate watching the films. I have only liked two remakes since the Remake Craze began. According to the Peter Fake Calendar the remake craze began in 2003 with the success of Dawn of the Dead. The two remakes that I have liked are Alex Aja’s The Hills Have Eyes and this movie, The Crazies.

Although what sets The Crazies apart is that I actually like George Romero’s The Crazies just as much! The 2010 Crazies, directed by Breck Eisner, is so well done because it is able to evoke the same emotions as the original while being different enough keep even the harshest critic, like myself, interested. I am a little partial to outbreak films however. Keep that in mind I as you read this review.

I had the pleasure of watch The George A. Romero Crazies, with George Romero in person three years ago. After we watched a terrible 16mm print of his film, old George did a Q&A. Romero explained how the film was more relevant today than it was in 1973. He said that The Crazies is about a military operation that gets completely mismanaged, just like the situation in Iraq at the time. This didn’t really add to my appreciation of The Crazies but it did make me a little apprehensive going into the 2010 Crazies. I feared Breck Eisner my try to take some cheap jab at the military’s handling of Afghanistan in an attempt to make himself feel smart and important like Michael Moore. Boy was I pleasantly surprised!

The Crazies 2010 is about a virus, intended to be used as a biological weapon, engineered by the United States Military and accidentally unleashed on a rural town in Iowa. The Romero version uses a rural town near Pittsburgh. This new version centers around the town Sheriff played by Timothy Olyphant. You may remember Olyphant playing the Sheriff on HBO’s Dead Wood. Olyphant is great at being a cool, calm, and collected bad ass. He was very reminiscent of one of Michael Bein’s performances from his heyday with James Cameron. As the sh*t is hitting the fan Sheriff Dutton and his trusty deputy played Joe Anderson, do detective work and kick infected yahoo as well as military ass.

In leaving the military out of the 2010 Crazies, this film is really set apart from Romero’s version. George used the military to convey information to the audience and really set the parameters for the story. In that version we see Eye-Patch guy from Dawn of the Dead explaining how the virus worked so we always had a grasp on what was happening to the characters even though they do not. Everything we know in the 2010 Crazies is figured out by The Sheriff, his deputy and the Sheriff’s wife as they try to flee their town which has been quarantined and systematically exterminated by the army.

The slickest move in the 2010 The Crazies was pulled off by the screen writers Scott Kosar and Ray Wright. They were able to keep the audience guessing by establishing that the Sherriff’s wife, played by Radha Mitchell, is pregnant and has been running a fever the whole week. Unfortunately, the first symptom of having the virus is running a fever. Does she have the virus? Is she just pregnant? You’ll have to watch The Crazies to find out.

Romero also used the military as fodder for his social commentary. The new Crazies has way less of the social commentary that everyone has been beaten over the head with for the past seven years. The audience is given a lot more time to have fun with all the things we love about outbreak movies. This film delivers on all the points you’d expect. There are guys in hazmat suits with flame throwers. I love hearing the generic outbreak lines spoken through suits. “He’s got the virus!” and then some crazy get flamed. Its beautiful. When was the last time you saw someone get flamed in a Hollywood picture? I can’t remember the last time I saw someone get hit with a flame thrower, so if you like flame throwers as much as I do check out The Crazies 2010.