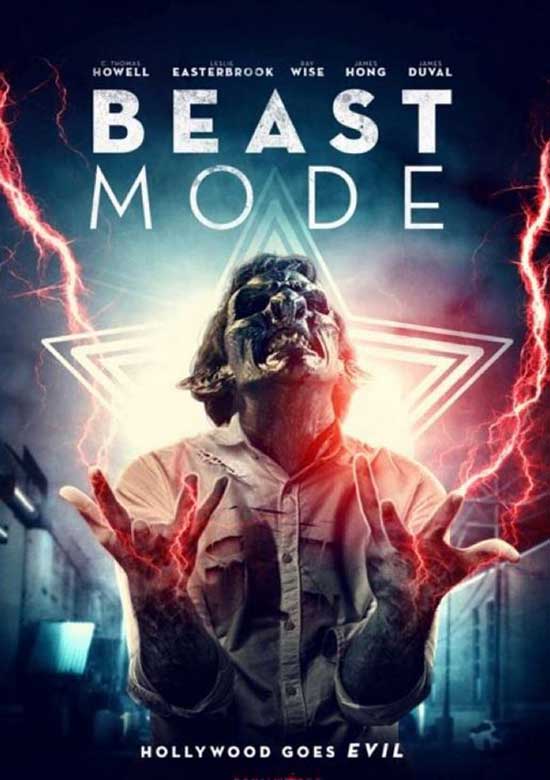 ‘Bad boy’ actor Huckle Saxton lets fame get to his head and turns into a ferocious beast, ripping Hollywood to shreds. Will he sink his teeth into the role of a lifetime or succumb to the dangers or the Hollywood lifestyle?

Beast Mode is directed and written by, Chris W. Freeman and Spain Willingham, and Drew Fortune. A woman is trying to heal her child. She is making this special cream and she is accused and called a witch.

C. Thomas Howell plays Breen Nash and his adorable dog are dressed alike. They have matching pajamas. He is responsible for the film Gods Of Pluto that stars his ‘bad boy’ actor played by, James Duval (The Doom Generation, SLC Punk!, Garlic & Gunpowder, May, Gone in 60 Seconds, Donnie Darko.). James Duval has a long resume, portraying some of the most epic and legendary characters. In Beast Mode, James portrays Huckle Saxton. C. Thomas Howell (The Hitcher (1986), The Outsiders, E.T.) another epic actor. Breen has a meeting with a producer, Scram played with intensity by Daz Crawford.

Breen is looking for his lady friend, Kira (Suzanne Quast). He finds her. Oh, he finds her with Huckle. There is some spaghetti involved, a night club. You know, everything fun.

So, Breen is talking to Huckle and it gets weird. Huckle is run over and killed. The comedy with C. Thomas Howell is great. His expressions are great. Breen drags a dead or not dead Huckle into the meeting with investors for the movie. Muffy Meyers (Carrie Finklea) kicks a dead Huckle and smacks him. Breen sits Huckle on the couch and forces a smile on his face. James Hong is great as Pish Rudabaker.

They work some magic and meet the twin of Huckle. Muffy and Hampton Rust played by Spain Willingham decide they could get a doppelganger, a look-a-like. They don’t even need Huckle. The magic is the same “weird cream” from the beginning of the film.  The new and improved, humble version of Huckle is not what Hollywood is expecting. C. Thomas Howell is hilarious in his role. He mumbles, “I hate actors.” He plays an agent/producer. They are shooting the movie, Beast Mode and the new Huckle is letting the bright lights get to him, he turns into a BEAST! The special effects and make-up teams did a good job.

James Duval doing yoga and kicking ass, playing two different characters in the same movie. Breen discovers the Beast and he wants to eat Breen. Robert Costanzo is great playing Chrome Mangle. The cops are alerted that there is an “animal” on the loose. Breen tells his co-worker Muffy Meyers (Carrie Finklea) about the situation. They just happen to have some tranquilizer darts and GPS on the new Huckle’s phone.

Chrome is on the move. He is trying to solve this crazy mystery. Meanwhile, in a storage unit, the real Huckle wakes up and he thinks he’s in hell. He is looking for a way out. Douglas Bennett (Sons of Anarchy, The Kid, Rolling Thunder) plays Ezequiel.

C. Thomas Howell gets to be the Beast. Each person who turns into a beast looks different. They get wild superhuman strength. Spain’s character Hampton comes to the rescue of Breen. He wants that producer credit. It’s funny. It has a tongue and cheek feel to it. C. Thomas Howell and James Duval do such a good job. “Hollywood, where dreams are made and hearts are broken.”

Breen sends his fellow producer to go look for Trammel Steadfast (Ray Wise). Huckle gets out of the storage unit and he meets his doppelganger. A few other people discovered the magic cream and they turn into monsters. Breen and his poor dog wind up in prison. They show, “18 months later and Good behavior/Acting lessons for Prisoners.” This movie is fun. It’s a good movie to watch in quarantine with some popcorn. The cast is funny and the dog is too adorable. Make sure to watch the credits for some extra fun. Check out Beast Mode.