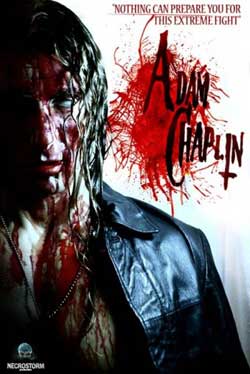 a Demon who will bestow on him a dark, superhuman strength…The Demon will lead Adam to the murderer if he does his bidding – So begins a bloody war of extreme violence as Adam fights the might of the police corp. and their dark allies head-on. Will Adam kill his enemies before the Demon calls in his debt and drags his soul to hell? Will he see his dead wife for one last time?

“Adam Chaplin” is one of the most badass films I’ve seen in years! It’s’ not too often that I start off a review on that note. As a matter of fact, almost never (Note: films worthy of that statement “No Reason“, “The Orphan Killer“, “Tokyo Gore Police“)

Make sure to check out the gory trailer for Adam Chaplin 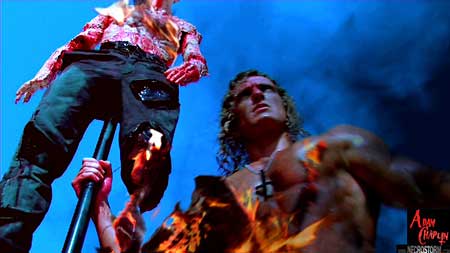 I’m not sure whether I should start off by praising the film or the filmmakers behind this one. To cut right to the chase, “Adam Chaplin” is a debut feature by a new obscure film company called “Necrostorm”. “Adam Chaplin” is reason enough to anticipate the next thing from these folks , however we still need to talk about the movie and why its so effective. 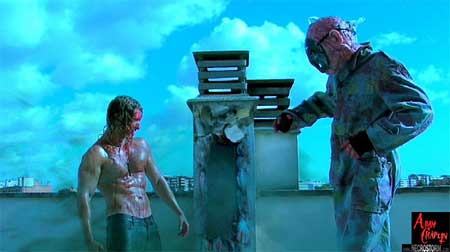 This indie horror splatter fest sets new standards in combining gore, action, and a manga-like qualities setting itself up in a universe all its own. Our setting exists in a country called “Heaven Valley” (obviously meant to be sarcastic) centered around one muscle-bound demon-powered man by the name of Adam Chaplin. Adam is a tortured soul who is in search of reasoning behind his wife’s recent death. His wife was found burned to death but under rather suspicious circumstances. The anger within Adam raised a demon offering him superhuman powers. This pasty clay headed demon has also burrowed a nice home into Adam’s back for when he’s called upon to give him the stretch of a superhero. One of the unique tricks they use in the film is the display of a upside cross blood splatter that hits the wall when Chaplin is done unleashing his fury. 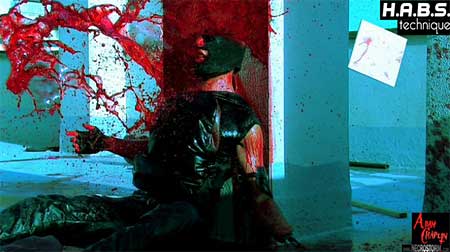 Adam obeys this demon spawn fueled by his need for revenge and retribution. This leads him to a local mafia crime lord called Denny Richards who dons a black mask only partially covering his mangled burned-chewed off face. Denny suffers from a child hood trauma resulting from when his pet dog became unhinged due to the injestation of chemicals. The dog which became a monster himself almost chewed Denny’s face completely off.

Now years later Richards runs a cold tight ship that doesn’t tolerate anyone late on their debts. This uncompassionate approach has made Denny quite the evil overlord.The characters and people within this world all seem to posses a bit of odd disfigurement from one to the next. Local enforcers are just different enough to feel out of place from any film we’ve seen. 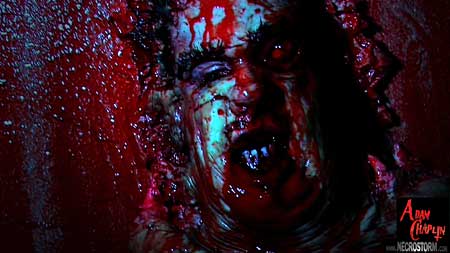 Adam who seems almost unstoppable tears thru one body after the other pummeling in heads with the force of a manga comic and the rapid fire energy of a juggernaut. The local enforcement make every effort to subdue, capture of kill Chaplin with little success. These enforcer kills are so bloody and violent that it gives most Tokyo gore films a run for their money. Though you won’t have to wait long as the first scene opens up on the pummeled heads of beaten down bodies.
“Adam Chaplin” dons probably one of the most unassuming titles to date. With a title that sounds like a Lifetime auto-biography, fans will not only be surprised, but completely floored with this films pure visceral bloody FX work and overall production. The team cites that they have set out to bring back the 80’s style into their work, but I have to disagree in a positive way. Alot of 80s films don’t hold a candle to the rawness of this beast. If it was based on 80s’ I’d have to say more as an inspiration than as a shoe-in for retro. “Adam Chaplin is a sure fire fit for a cult following that will exceed many expectations. 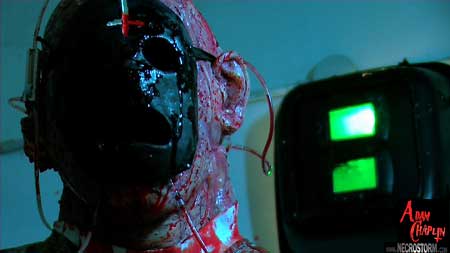 The movie is directed by newcomer Emanuele De Santi who leads and acts in this Italian based film. He also scored the rather inspiring soundtrack that adds an additional level of impressive contribution. FX work is top notch and as brutal as they comes with heads exploding, faces being smashed, parts ripped, bodies impaled, burned, blasted, and beaten to pulps……….its a madhouse of gory bliss. I’m gonna end this one with saying that I’m an instant fan of the team’s hard worked on creating something that feels different and more inspiring than any independent I’ve seen to date. Folks, this one is hardcore, but its certainly one to watch and own. 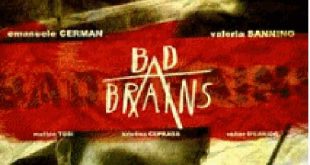