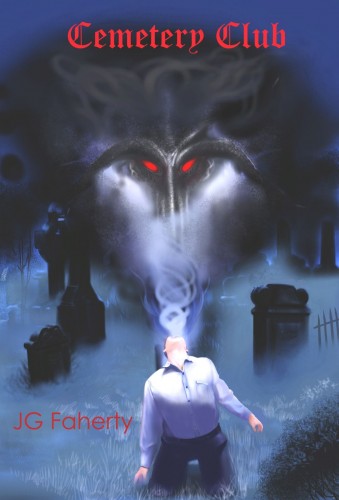 Faherty’s latest effort is spell binding terror with a paranormal slant with tons of twists and turns. Often thought provoking and spine tingling several prominent themes are introduced simultaneously. Who wouldn’t love a good ghost, ancestry, paranormal, zombie tale right? Toss in a few skeletons in the closet and it seems we have ourselves a blue print for thrill ride into the mind and imagination of one JG Faherty.

The premise of cemetery club is complex and chock full of action for a novella lengthed piece. Perhaps what I admire most about this author is their ability to cut through the unnecessary nonsense of exposition and cut right to the chase as they say in Horrorwood. We’re kept mesmerized in frenzied heart racing fashion turning page after page to find out the ultimate fate of our protagonists. What Faherty can achieve in two hundred fifty pages or less many contemporary authors drag out for six, seven hundred pages. In a society that is fixated on twitter, facebook, texting, instant messaging, on-line gaming etc, etc the attention span of the average Joe or Josephine is diminished more rapidly among the ages. JG seems to have a firm grasp on this conception and plays his story telling cards well.

Our tale ignites in colonial 1779, the village of Rocky Pointe. The town’s eccentric evangelist Nathaniel Randolph smythes the patrons of Martha’s Tavern incriminating one and all as harlots, jezebels and glutens of the flesh. Predicting an eternity of damnation he ridicules the inhabitants before being tossed out. Upon departing he sets the tavern a blaze.

Rocky Point, 1847 the reverend Hollister Randolph, son of late Nathaniel feebly protests the burning of the towns sanctuary for those plagued with leprosy. Mayor Boyd instigates the burning with his fatal approval.

Transcend onto Rocky Point 1922. Dr. Grover Lillian secretly conducts experiments on fifty patients of the Wood Hill Sanitarium, hoping to find a cure for small pox. The vaccine is trial and not federal approved. Realizing his testing is unethical as the body count rises he begins to bury the bodies beneath the bowels of the asylum. Ultimately Dr. Lillian murders his assistant before pulling the trigger on himself rather than facing the consequences of his actions

Our plot moves to the present where Todd Randolph has just been released from the same institution, Wood Hill Sanitarium after being incarcerated for the past twenty years. Todd suffered from delusions in the public eye claiming demons that he had released were responsible for all the Rocky Point murders. Enter Dr. Eli Sloan who had conducted his own experiments responsible for over sixty deaths within the mental hospital. Now twenty years later Pete Webster an Frank Adams two of Heaven’s Gate cemetery groundskeepers fall prey to unholy visitors all over again.

Gradually one by one The Cemetery Club, a group of misfit, ostracized founded in their youth reunite including Todd a broken man child released into society, Miles a high profile big apple attorney, Marisol the local coroner and John a homeless victim of his own demise. Together they strategically plan to over throw the minions of hell. They feel their responsible for the strange occurrences in Rocky Point, having opened a porthole by a Ouija session deep within the confines of a mausoleum, their regular meeting point as adolescents.

While the body count rises and they run out of time and resources will it prove to be too much of a mountain to climb to save Rocky Point?

Faherty’s depiction of lineage between family ancestry and present day sense paints a foreboding situation for our protagonists that illustrates and reinforces the plausibility factor unto readers. We find ourselves in need of finding our more of the family’s roots and how they affect our main characters current dilemma.

The rivalry between the local police department and the club is timeless and a necessary element in laying our effective fiction. The author’s use of multilayered conflicts within this tale is impressive considering its relatively modest length.

The relationship that builds between Miles and Marisol is heartfelt and encouraging for those who aspire to find the boy who gets the girl in the end tale.

The attacks and deaths inflicted from the spirits and undead are creepy, disturbing and unsettling which just makes for good old fashioned horror. While delving deeper into the club I found I only had one very minor irritation that dissolved as time wore on. I found there was an overindulgent amount of characters introduced cluttering the reader’s mind and inevitably causing confusion. It is difficult to form any imaginative bond or sense of relation with the characters if we do not get to know them and they’re slaughtered as quickly as introduced. In hindsight it is evident why this approach was utilized to create an ominous back drop for our antagonists fuelling their vengeance in disrupting their infinite resting grounds. There’s a delicate balance here and in the final hour I feel JG has pulled it off without a hitch. I would however recommend for future endeavors to be weary of introducing too many characters otherwise our readers get lost and I fear that defeats the ultimate premise for an otherwise phenomenal paranormal piece.

JG Faherty has initiated an impressive following into The Cemetery Club. With spine tingling, hair raising suspense I look forward to his next tale.