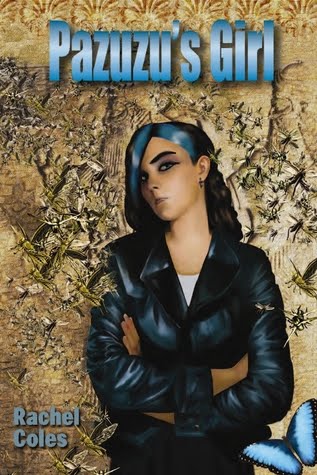 Pazuzu and Lugal are human incarnates of Mesopotamia with unearthly powers. An ancient tablet of destiny is stolen from the goddess Lamashtu. As a result the two are exiled to exist among humans as their infinite sentencing.

Gradually indication the two with supernatural powers can no longer keep up with their cleaver contemporary disguise. As nosey neighbours, meddlesome community members and the school system notice that something is dreadfully amiss in the Wilson family household.

Pazuzu’s daughter Morpho’s academics are exceptional yet behavioural issues surface. She gets into a scuffle with a classmate with a boy and has to serve detention and starts skipping school. All she wanted was to be a normal girl with a regular family.

Humorous references are sporadically made that perhaps Pazuzu and his faithful servant Lugal are same sex partners. Despite the fact Pazuzu is the incarnate demon of plague and wind he struggles to give his daughter a good life protected from the forces of evil.

He predicts and senses an unholy uprising, Lamashtu his ex-wife is plotting revenge and will stop at nothing to harm the one he loves most his daughter Morpho.

Meanwhile Morpho develops an unlikely comradery with teenage misfit JD. After meeting him in detention the two bond over smoking a little pot, mustang riding and Burger King.

Pazuzu learns of their alliance and materializes from a cluster of grasshoppers striking paralyzing terror into the boy. He brandishes him with a seething warning to stay away from his daughter.

Mr. Wilson is called into the principal’s office to discuss the decline of Morpho’s behaviour. He and Mr. Agresti share a surreal moment when Pazuzu realizes he’s the incarnate of the God of Farm. Feeling backed into a corner Pazuzu divulges his daughter is in grave danger from his insane ex-wife Lamashtu. Mr. Agresti vows to do everything humanly possible to protect his students and Mr. Wilson’s daughter.

Further evidence is shown on a global scale Lamashtu’s reign of destruction knows no bounds. As the unlikely alliance of Pazuzu, Lugal, Morpho, JD and Mr. Agresti among others form will it be enough to thwart the evil apocalyptic destruction of Lamashtu? Or is it the end of days for the Gods and mankind as they know it?

Initially I’d held great reluctance in thinking full comprehension with Pazuzu’s Girl could be attained without a degree in Mesopotamian history or at very least a companion/guide to decipher all the historical jargon. It was a little distracting at first but in hindsight was in all likelihood a personal obstacle as it did very little to defer from the plot. The characters grow on you and their exotic names stick with you as effectively as Jim, John or Dave.

Subtle humor and use of mild drugs, sexual innuendo is upbeat and breaks the monotony of all the foreign mumbo jumbo.

We feel unavoidable empathy for Morpho, a product of teen angst and alienation. She has an innate need for stability and normalcy. We invest an interest deeper into the tale wanting a triumphant turning point for our lead protagonist. We see a little of ourselves in Morpho and can’t help but subconsciously cheer her on through her unworldly misadventures.

The bond between JD and Morpho is endearing and captivates the reader further to want to see what happens next. Who said you can’t have a little romance in your horror/adventure/ethnic fantasy tale? A little mishmash in today’s literary world seems to go a long, long way.

The action in the final act is fast paced, graphic and intense. Suffice to say the rising tension in the battle of good versus evil rivals that of any summer blockbuster film. The conclusion is touching and reaffirms the very humanistic side of society that is often labelled as detached or inept towards compassion.

There is a very promising future for prospective Ms. Rachel Coles. I’d be curious to see more.