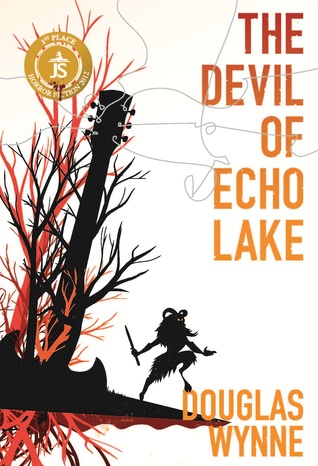 THE DEVIL OF ECHO LAKE
By Douglas Wynne
JournalStone Publishing

A heavy metal/gothic rock star named Billy Moon begins to soon realize his fame and fortune has come at a rather unholy cost. Signing to record his third album in the famed, secluded Echo Lake Studios, a converted church with a macabre past, Moon begins to come apart at the seams, dangling by the frayed ends of sanity. Will Moon unveil the dark secrets of Echo Lake Studios and will the mystery hold the very key to resurrecting his forsaken soul? Only Lucifer himself may know, in The Devil Of Echo Lake.

Journalstone continues to impress me with their originality, compelling methods of story telling. The majority of their authors are new to the publishing business yet far from new in the area of talent. Granted this is far from the first time a writer has dabbled in an occult oriented story with a musical backdrop. Yet it is evident Wynne has exercised the carnal rule of creative writing in writing what you know about. Perhaps the author is, has been or at very least is extremely knowledgeable of the ins and outs of the music industry.

One may hamper a guess that indulgent degrees of industry jargon, lingo and description may bore the occasional reader. I really don’t think this is the case here. Wynne illustrates just the right fine balance in between describing what is going on behind the scenes and the very real terror that lurks in the shadows of the converted church. It’s creepy, spellbinding terror and fixates the reader into finding out more, more and more. At very least I would say the author did a phenomenal job of research and creates a very realistic, believable setting and characters.

The formula of an evil incarnate such as a demon, disciple of the devil versus human conflict is tried and true. Everyone likes a good old fashioned soul for sale story. Wynne had done a wonderful job of illustrating the rising tension here.

The plot is layered with a number of interesting characters from Jake the aspiring engineer to the lead protagonist Billy Moon in his struggle for love, belonging and stardom to Rachel the obsessed fan to Trevor Rail the epitome of slimy record company executives.

Moon’s apathy and suicidal tendencies will unite a large audience plagued with melancholy similar to teen angst heavy metal unions. While reading DOEL I’m reminded time and again of the group Korn or perhaps Marilyn Manson. I think it’s ingenious how the author has tuned into a younger audience and ideally opening the eyes to a new market.

Trevor Rail is mysterious, ominous and as sinister as it gets. His role keeps the reader in suspense and in wonder if he is human, a demon incarnate or the very devil himself.

In some very minor grievances: I didn’t care for how Rachel Shadbourne, the obsessed fan turned muse was portrayed in the final act of the novel. I won’t disclose any spoilers here and encourage readers to explore the tale on their own and see if they know what I mean. It’s a personal preference and inevitably some readers will feel she arrived precisely at the destination she deserved. I also would have liked to have seen a much more gradual descent into Moon’s madness. Some of his behavior at the studio was highly erratic even for a pampered, spoiled rock star. Then again there are specific guidelines to maintain for the publishing companies so it’s easily over looked. Perhaps a film adaptation would capture his turmoil well.

It is no mystery as to why Douglas Wynne achieved a tie for best novel competition. I look forward with great enthusiasm to reading his future endeavors.