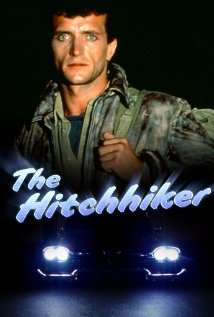 Fictional stories are told in this television series by The Hitchhiker. Each story is usually a mysterious thriller.

Per Wiki
Each episode is introduced and concluded by a mysterious wanderer known only as “The Hitchhiker,” and explores the foibles of humanity and its dark spirit. The title character was played by Nicholas Campbell from 1983-1984 (3 episodes), and Page Fletcher from 1984-1991 (82 episodes). There were a total of 85 episodes over six seasons (39 first runs on HBO & 46 first runs on USA).

The Hitchhiker is a mystery anthology series that aired from 1983 to 1987 on HBO and First Choice in Canada. The series later moved to the USA Network from 1989 to 1991.

From Hitchhiker.com
When The Hitchhiker, HBO’s first dramatic series, debuted in 1984, the show was not only at the forefront of original programming for cable, but also helped establish the standards of excellence for such programming. The series also helped establish the acceptance of cable programming as an avenue for top film and television talents, and continued to be one of HBO’s most popular original dramatic series.

The Hitchhiker is a half-hour dramatic anthology series presenting modern morality tales with contemporary players. In 85 chilling stories, men and women struggle with the best and worst in themselves, battling with – and all too often succumbing to – their deepest lusts, obsessions and fears.

The Hitchhiker won eight ACE Awards and became the highest-ranking series on pay television. With powerful and controversial adult productions, The Hitchhiker presents sophisticated tales of terror and suspense, infusing them with stunning film-noir production values and movie-marquee talent.