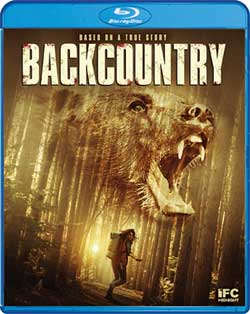 An urban couple go camping in the woods and find themselves lost in the territory of a predatory black bear.

One of the most prevalent knock-off genres of “Jaws” since its release in 1975 has been the Killer Bear Flick.  Second only to Aquatic Creatures Eating Tourists, it was a natural progression that the likes of “Grizzly” and “Claws” would be hot on the classic’s heels, depicting the lumbering woodland mammals as fierce monsters.  After all, many folks are generally scared pretty shitless of bears as well as sharks, yours truly included. 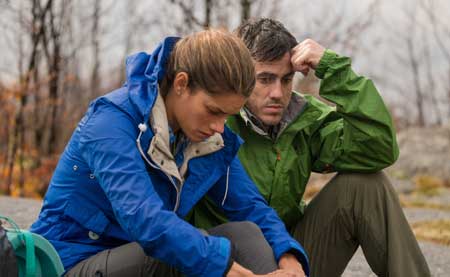 Add in the aspect of being lost in a vast wilderness, and the open sea doesn’t seem so daunting (nah, the ocean is still more frightening).  The first of two new releases this year (David Hackl’s non-remake “Grizzly” will be out shortly) to feature the furry antagonists is “Backcountry.”  Utilizing a plotline of such unadorned simplicity that it nearly sinks the first hour with its contrivances, writer/director Adam MacDonald’s feature-length debut is an intense, sporadically brutal tale of survival that is propelled by two fantastic leads.

Based upon true events (whatever the hell that means within the loose parameters of horror), our latest follows Alex and girlfriend Jenn (Jeff Roop, Missy Peregrym) on a camping trip through a Northern Ontario provincial park.  The plan is to take her to the secluded Blackfoot Trail, a favorite family vacation destination from his youth.  Jenn, a corporate lawyer more inclined to fill in a magazine relationship quiz than tent out for a weekend, equips herself with bear mace (I was not aware that existed) and a road flare.  Knowing the area from memory, Alex declines a map at the ranger’s station.  What are the odds that decision will come back to haunt him later? 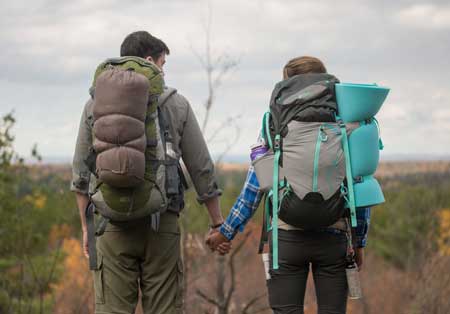 The first night brings the unexpected arrival of Brad, an Irish tour guide whom Jenn invites to dinner.  Played with simmering menace by character actor Eric Balfour of television’s “Haven” and “24,” Brad represents the only aspect of “Backcountry” remotely resembling a red herring.  After a confrontation between the men becomes aggressive, one is never quite certain if the black bear that begins stalking the couple is alone in its pursuit. 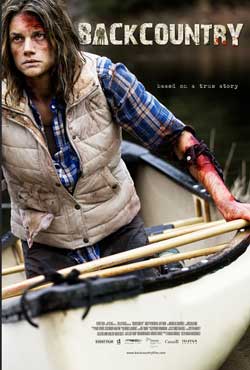 The next day’s hike results in the two becoming lost once Alex opts for an impromptu detour.  Given that you’re also viewers of the genre and not participating within its fantasies, I don’t think I have to tell you to always buy the damn map, friends.  If I had a map to my own basement, I’d carry it with me at all times just in case.  Taking the unmarked trail would certainly also constitute a terrible idea on his part, and hiding Jenn’s cell phone back at the car to enforce full enjoyment of Mother Nature’s cruelty certainly isn’t registering as a wise choice in retrospect either. 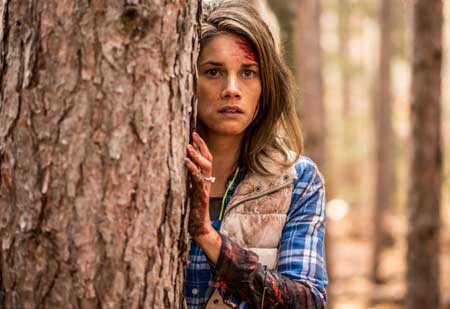 “Backcountry” jumps the rails at this point, struggling to segue from its saggy middle into the final third.  We move through the standard shrieking match to a few relationship lamentations, all of which serve only to kill twenty minutes before the big-ass bear makes his move.  Though never dragging to the point of utter tedium, the feeling that we’ve spent enough time playing meet-and-greet with the heroes is inescapable.  This is through no fault of Roop and Peregrym, who remain engaging during these moments despite the tonal dip into schmaltz.  Roop, best known for the series “Heartland,” brings tenderness to Alex even as she questions his character in a vitriol-infused rant after realizing their predicament.  Peregrym (“Heroes”) shines as Jenn in a brave turn, peeling away layers of buried strength as their situation grows bleak. 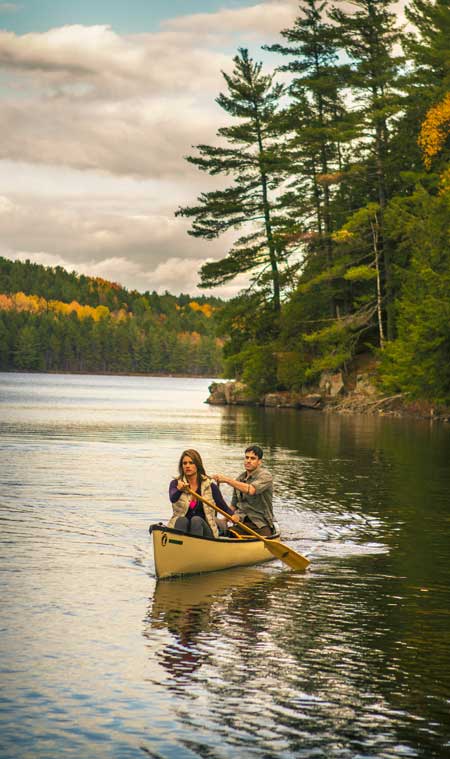 Once the bear can no longer curb its appetite, MacDonald films the initial attack on the couple with an unflinching eye for the violence inflicted.  Through static camera angles and confident use of focus and shadows, he manages to make it feel very real on a minimal budget.  The effects blend puppetry and stock footage (I assume, since production info was scant) just as Spielberg had forty years ago, creating a memorable killer with a long-forgotten attribute called “restraint.”  The direction, aces across the board, is accompanied greatly by the lush cinematography of Christian Bielz.  The Canadian wilderness plays a gorgeous and menacing character throughout, much as the Maryland forest did in that other movie about people having no luck with maps.

The enterprise becomes a relentless game of cat-and-mouse (or, bear-and-human) and extended chase sequence from the point of the assault.  I won’t divulge any further but to state that things can indeed get worse, even after a ravenous “giant rat” (how a friend likes to describe them) just attempted to turn you into breakfast.  For those who may find it lingers a bit too long in the set-up, it will still pay off in dividends.

Involving and at times heartbreaking, “Backcountry” is an excellent thriller and another fine example of the innovative and talented crop of Canadian film makers that have surfaced these past few years.  If “Grizzly” was “Jaws” in the woods, think of this as 2003’s “Open Water” in the woods.  Nothing wrong with that at all.

Backcountry will be available on bluray per Shout Factory