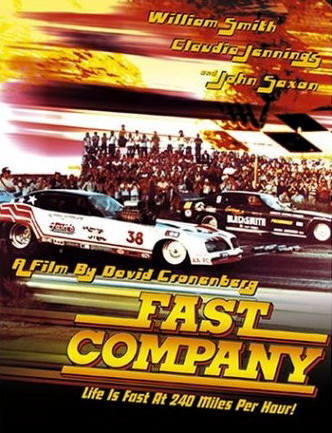 SYNOPSIS:
“Standard ‘good guys versus bad guys’ drag-racing movie. Nice scene of the driver’s view during a funny car run.” (thanks to IMDB for that detailed synopsis)

REVIEW:
He might deny it on the audio commentary, but this seventies exploitation movie rates as one hell of an anomaly in the career of Canadian auteur David Cronenberg. Made after he’d delivered his creepy body-horror films Shivers (1975) and Rabid (1977), and just before his first real stunner The Brood (1979), Fast Company (1979) is, by far, the most straightforward mainstream film on Cronenberg’s CV. Set within the greasy pumped up world of rural drag racing, the film focuses on the crew of heroic driver Lonnie ‘Lucky Man’ Johnson (William Smith), including wise veteran Elder (Don Francks) and young up-and-comer Billy (Nicholas Campbell), and their uphill battle with their sponsor’s unscrupulous money-hungry lead man (John Saxon).

It’s packed with documentary style footage of the drag-racing scene, long loving shots of the cars themselves, and a few gratuitous T&A scenes which look like they were forced in to meet genre expectations, like the ridiculously unnecessary scene in which Billy picks up a pair of hotter-than-hot hitchhikers and makes the old beast with three backs. Fast Company brims with energy while also setting up a nice gallery of engaging characters, but Cronenberg fans who have waited a long time to see this once-rare item might be a little perplexed by its complete lack of anything that usually characterises a Cronenberg film. Nevertheless, it remains a strong original work from a strong original filmmaker.

One thing fans of David Cronenberg won’t be disappointed with is the extras package included on the 2005 DVD release. As ever, the director is lucid, engaging and entertaining on his commentary track, admitting straight off that he hasn’t seen the flick in twenty-five years. He explains details about the shoot itself, as it was the first time he’d ever used sound stages as opposed to just real locations, and also describes his love for cars and his days as a street racer. Like the director’s other commentaries, this one is elegant, informative, quietly delivered, and filled with insight and interest at every turn.

Of even more interest to Cronenberg completists will be the goodies included on the second disc, including two early Cronenberg films as a bonus. Totally unrelated to Fast Company, the films Stereo (1969) and Crimes Of The Future (1970) are near-impossible to find elsewhere, and thus instantly makes this DVD an essential purchase. Both films are visions in the Cronenberg style we’ve all come to simultaneously love and loathe. Made on the cheap, they’re plagued by all kinds of technical problems (voiceover narration was used because of dodgy sound), but so many of the director’s trademarks are here: Weird government organisations, decaying diseased bodies, horrifyingly clinical depictions of sex, strangely diffident characters and paranoia supreme. The films are totally esoteric and often tedious, but they show one of the cinema’s great maverick filmmakers at work, and that’s more than reason enough for viewing by hardcore fans.

Rounding out the double DVD set is newly recorded interviews with old friends William Smith and John Saxon, who talk-up their careers as character actors and roast each other beautifully. These men are true cult legends rarely celebrated, and this is a great featurette. Although Saxon is in pretty good shape, Smith has aged a great deal, but he’s still a hilariously grizzled hard-arse, and he looks like he could still kick the sh*t out of most current Hollywood tough guys. The boys don’t have much to say about the film itself, but that’s beside the point, though Saxon does say he’s a great fan of Cronenberg’s later films.

Fast Company might not rank too highly in David Cronenberg’s canon of extraordinary work, but it’s still tight entertaining viewing, and the extras package is an absolute killer. And on that note, whether you like it or not, I’ll be back next week with another bargain-basement B-grader to thrill you, chill you, and fill you with swill with…Horror News! Toodles!