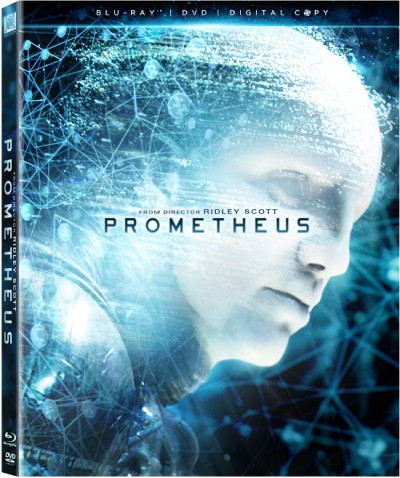 A team of explorers discover a clue to the origins of mankind on Earth, leading them on a journey to the darkest corners of the universe. There, they must fight a terrifying battle to save the future of the human race.

There are three films that the Black Saint was really looking forward to seeing this summer. “The Avengers” (Seen it four times so far & it is just Awesome)!, “The Dark Knight Rises” (I cannot wait to see if Nolan can top “The Dark Knight”) & Ridley Scott’s latest epic “Prometheus”. Over the last few months we’ve all been titillated by some amazing looking imagery in trailers for the film and we’ve been tantalized by the rumors of it being an actual prequel to “Alien” (Which were verified soon after by Scott himself). So it’s really not any wonder that the every fanboy in the known universe had gone through all of their underwear waiting for this movie to be released. Think about it, a prequel to one of the greatest sci-fi/horror films ever made directed by the man who directed the original! How could this be nothing less than incredible? 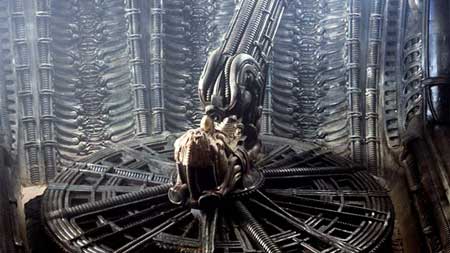 In “Prometheus” Noomi Rapace plays Dr. Elizabeth Shaw, a scientist who (along with her partner Charlie played by Logan Marshall Green) has discovered the same stone etchings in several different countries. The etchings show a humanoid extending his hand towards a series of five globes (Or planets). She is convinced that the key to the beginnings of mankind are hidden within the carvings and convinces the Weyland Corporation to fund a journey to the planet (Which has conveniently just been discovered) on which she believes the figure is pointing to. Prometheus is the name of the craft that embarks on this journey. 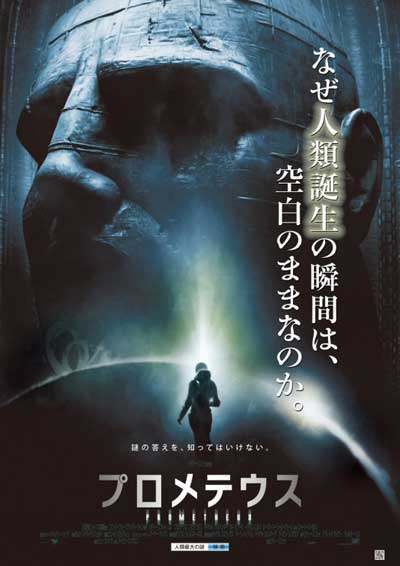 We are introduced to David (Michael Fassbender), the android who has been monitoring the ship & the crew, who have been in cryo-sleep because of the unfathomable length of the trip. These scenes are really very intriguing as we watch David go about his business maintaining the ship & it’s crew while trying to occupy himself when there is nothing for him to do. We see him riding a bicycle, bouncing a basketball, learning a new language & generally attempting to keep himself busy as he waits for the proper moment to awaken the crew. The first crew member to awaken is Meredith Vickers (Charlize Theron) who is dripping with sweat as she’s doing push up’s when David finds her. She instructs David to wake everyone up and we are then introduced to the rest of the motley crew. 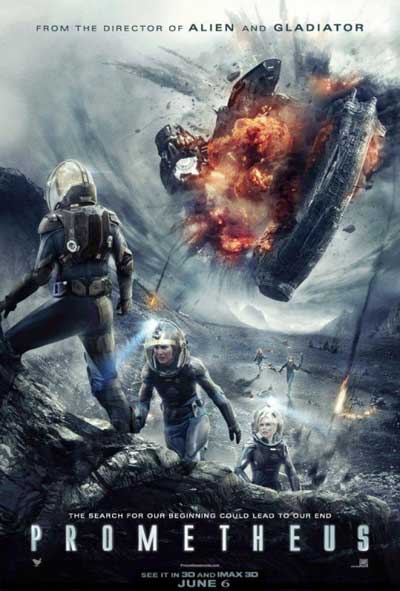 After a meal the crew is summoned together for a quick debriefing as to what their mission is. It was during this scene that I assumed we would get to know a little bit about everyone but besides the perfunctory wise cracks from a select few, they are all just faces and don’t really do much but stand in the background for most of the film. Captain Janek (Idris Elba) is pretty much the only crew member besides David, Elizabeth, Charlie & Meredith that the script seems to have any interest in and I found that disappointing since we are told that there is a crew of 17 on board and I would’ve liked to get to know a little more about all of them. I know that it’s pretty much impossible to get a lot of character development going when you have 17 different characters to focus on but if that’s the case, why does the script bother to tell us the number of people on the ship? David was running the damned ship himself with no problems, why put in all these characters if you aren’t going to feature them in some way? 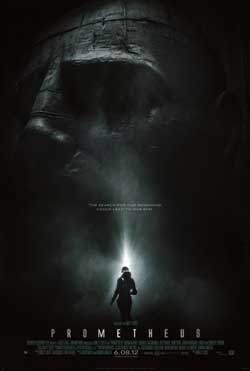 I had a LOT of problems with what was going on as I watched “Prometheus”. Characters do things that just don’t make much sense, and a lot of these mistakes that are made are made by characters that we’re supposed to believe are scientists, as in scientists should know better than to pick up a decapitated head of unknown origin, put it in what looked like a bowling ball bag, bring it on board, handle it as if it was a beach ball & start to try to RE-ANIMATE it so that they might be able to communicate with it only to have it blow the f*ck up & then wonder why that happened. That’s the last we hear of the decapitated head as well. The entire sequence came off like a “Saturday Night Live” skit but it wasn’t meant to be, oh no….this is serious science fiction we’re talking about here. 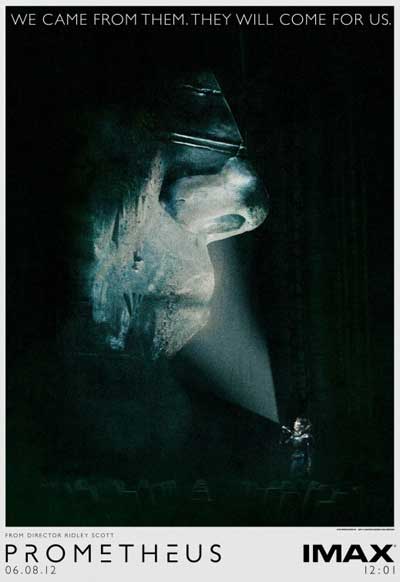 Let’s get to the script for just a second here. Written by Damon Lindelof & John Spaihts, the script aspires to bring back some serious adult sci-fi action to an audience that’s been clamoring for a sci-fi film that doesn’t feature some annoying teens from another galaxy who are being chased by someone or something extremely stupid. But when you make nearly every character in the film just plain stupid, when scenes just seem to stop midstream without resolution, when entire characters appear for a few minutes to recite a innocuous line & then mysteriously disappear never to be heard from again, then I think you have a problem here.

I actually walked out of the theater believing that 30-60 minutes of this film are being held in reserve for a “Directors Cut” to be released on DVD/BluRay. There is NO WAY that you can make me believe Ridley Scott let a film with so many continuity errors & asinine actions being taken by the characters in the film get released, I just don’t believe it. He’s Ridley f*cking Scott for pete’s sake! He’s a freaking icon!! I think he’s being held hostage in some well decorated screening room somewhere as this film gets rolled out across the nation, that’s what I think. 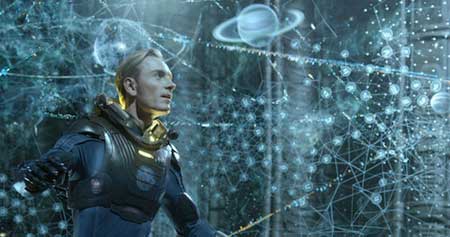 And it only gets sillier acolytes! We do find out who “Created” us in the end and we do find out who the infamous “Space Jockey” is as well but the actions of these characters are completely contrary to what they seemed to want to accomplish when they “Created” humanity. I can’t say anymore about it but it’s just plain ass stoooopid. And the ending? All I can say is that I was not satisfied & I daresay a lot of people will agree with me although we do get something of a payoff when it’s all said & done.

The film does look astounding though. It’s the most beautiful film I’ve seen this year bar none and the opening sequence in which we see a alien ingest something that dissolves him from within & fall into a stream where we see his DNA merge with the rolling water is a thing of beauty. But what does it all mean? It becomes obvious what happened from his action later on in the film but it is something of a head scratcher for awhile, a totally unnecessary one. The set design & special effects are incredible and if you see the film on an IMAX screen you just might feel like you’re on that distant planet with the wanna be scientists who really don’t know diddly. 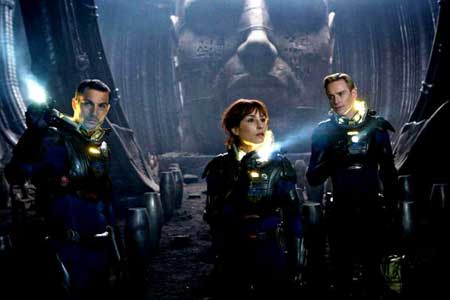 The actors do the best they can with the skimpily written roles. Noomi Rapace has a oddly alluring beauty that serves her character well, she is a bit overwrought at times but she is effective. Charlize Theron is a pretty good bad guy (Or gal if you will) & is drop dead gorgeous to boot. My favorite performances came from Idris Elba & Michael Fassbender. Both of them inhabit their characters completely and are completely believable although Elba’s last act in the film was just so out of left field & just plain crazy that it almost made me wanna hate the character. Fassbender is one great android, he’s like an ambulatory Hal 9000 with some DNA tossed in from our good buddy science officer Spock. And while I’m on the subject of androids, why is it that they all lose their heads in every “Alien” film in the franchise? Just wondering… 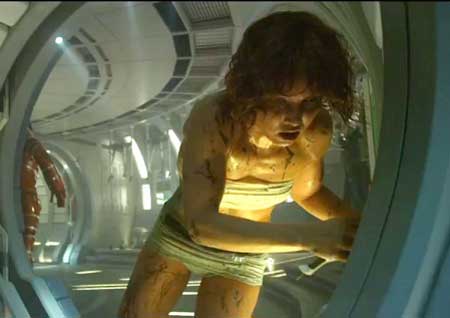 In the end I cannot recommend “Prometheus”. It is a long, laborious & dumb film that tries really hard to cover it’s shortcomings with some astounding visuals. For those visuals & nothing more I can give it a two out of five shroud rating. But it was supposed to be so much more, I had such high hopes for this film to knock me back on my ass & enjoy the experience but in the end I felt cheated and I really wanted to love this movie so much. You will read some extremely positive reviews for this film and while I never begrudge anyone their opinions, I think that the stunning visuals helped smooth over the holes in the script. Yeah…I think that people are praising it for how it looks & not how it really IS. You’re gonna see it this weekend anyway so it doesn’t matter what I say in the end but don’t say I didn’t warn you…