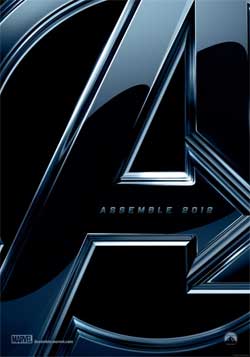 Nick Fury of S.H.I.E.L.D. brings together a team of super humans to form The Avengers to help save the Earth from Loki and his army.

I am SUCH a nerd! Although no one has the chutzpah to actually come out and call The Black Saint a nerd, I’ll admit to it with something close to a smile on my face. I have watched every one of the “Superhero” movies released over the last 10 yrs. or so and I have been anxiously awaiting today, the day when Marvel Productions unleashed (After some very intricate puzzle pieces being placed in separate movies over the past few years) their magnum opus…”The Avengers” 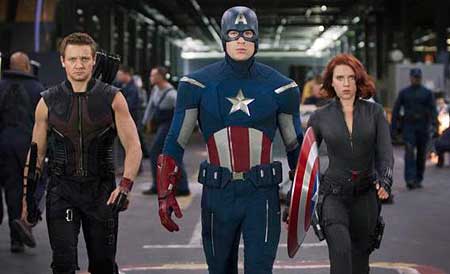 “The Avengers” tells the story of how Nick Fury (Samuel L. Jackson) of S.H.I.E.L.D. managed to bring together a group of heroes in order to defend the Earth from any danger that the military could not handle. These heroes (Captain America, Iron Man, Thor, Hulk, Black Widow & Hawkeye) all come from disparate backgrounds and don’t always see eye to eye but they have a job to do. The job? Thor’s evil half brother, Loki (Tom Hiddleston) has joined forces with an alien race bent on subjugating humanity because they look upon the human race as weak. They give Loki the power to open a portal in space through which they will enter our atmosphere and begin their takeover. Of course it’s not that simple but I can’t divulge too much of the story. Just believe me when I say it’s all worth it in the end. 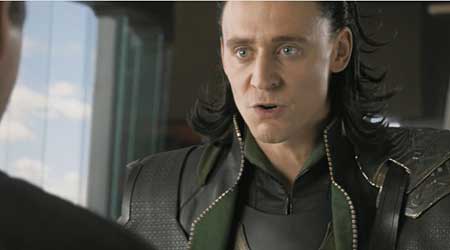 The most amazing thing about “The Avengers” is the fact that with all of these larger than life characters to manage it doesn’t collapse like a house of cards in a windstorm. As a matter of fact every one of them have more than a few moments to shine throughout the movie. Capt. America (Chris Evans) is the heart & soul of the team, Iron Man (Robert Downey Jr) is the resident wise guy, Thor (Chris Hemsworth) is the one who doesn’t suffer fools well, The Hulk (Mark Ruffalo) just wants to be left alone, Black Widow (Scarlet Johannson) wants to make amends for her past deeds & Hawkeye (Jeremy Renner) is just a bad ass who really wants to nail Loki with an arrow through the eye as payback for an incident that takes place early in the film. & Loki (Tom Hiddleston) is so repulsively evil that you had to respect the guy. Director/Writer Joss Whedon manages not only to give all of these oversized personalities some face time but QUALITY face time at that. All of them have individual setpieces as well as action scenes together. And yes, we do get to see them fight among each other also. Iron Man vs. Thor, Thor Vs. Hulk, Capt. America Vs. Thor, Black Widow vs. Hawkeye…it’s a total freaking nerd fantasy and it is just awesome! 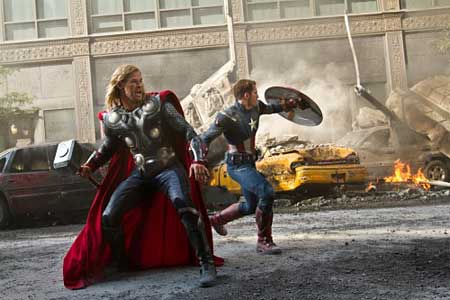 Every one of the actors fill out there roles perfectly. You would think that Downey’s Iron Man would steal the show (He does have the best lines) but in actuality Mark Ruffalo’s Bruce Banner is the standout performance here. As opposed to Edward Norton & Eric Bana (Who played Banner in the two previous “Hulk” films), his take on Banner is one of quiet fury. He acknowledges the Hulk as the “Other guy” and he knows what he’s capable of if unleashed but it almost seems like Banner is toying with the idea of letting him go free throughout the film. There’s something of a smirk on his face throughout the film although he does feel some remorse for his alter ego’s past deeds (“Last time I was in NY I broke Harlem”). He also hasn’t had an “Incident’ in over a year and he won’t say how he’s managed to stay so calm… 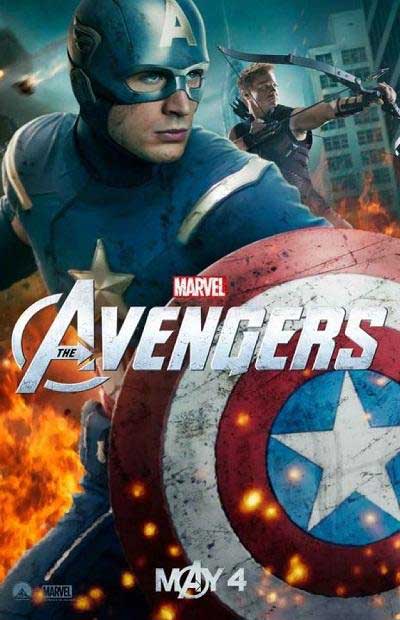 It seems like every character in the film has a secret they’re keeping to themselves. Nick Fury has the biggest one of all and once it is revealed the tonal shift of the film changes, it becomes more dramatic & tense. What’s great about this is that by the time it was revealed I felt just as disappointed as the heroes did. I had a vested interest in every character in the film which is not the case when it comes to superhero films. Somehow Whedon managed to fashion a script that will satisfy fans of each and every character, a script that combines all of the best elements of drama, action & comedy. It is so obvious that Whedon loves these characters and wanted to make a movie that did them all justice, he succeeded beyond anyone’s wildest imagination.

The final 30 minutes of “The Avengers” details the attack on NY by Loki & his alien army and it is VERY reminiscent of any one of the three “Transformers” films of the past few years but with one giant difference…it all makes sense! It isn’t just a bunch of scenes of tumbling buildings & giant menaces trashing the city as humans scurry back & forth. The final battle scene sets a new standard for all action/fantasy films to shoot for from here on. There is not one single moment where it is anything less than utterly believable and remember…we’re talking about a bunch of people wearing tights battling a horde of reptilian aliens led by a god so believability is something that shouldn’t be sought out while watching this film. It is so packed with action and outstanding set pieces from all of the principals that I could barely catch my breath in between scenes. It is just that good acolytes! 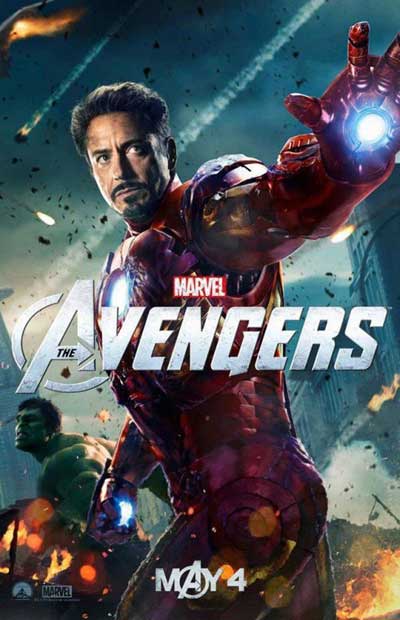 And to top it all off, we get not one but TWO scenes after the end credits start to roll. If you don’t know, part of the genius behind the Marvel superhero films of the last few years is that they always ended with a coda after the end credits began that tied them to the films to come. In essence, they acted as they were part of a serial film like the ones of the 30’s (Flash Gordon for instance) in which we had to return in a few weeks to see how the cliffhanger would resolve itself. Well, the first one made me mess my pants in excitement for “Avengers 2”! If you’re a comic fan you’ll understand what I mean when you see it. The second one is more of a comedic bit that ties into a line that Tony Stark utters near the end of the film. It’s a really nice way to end everything up & you will smile once it’s done. 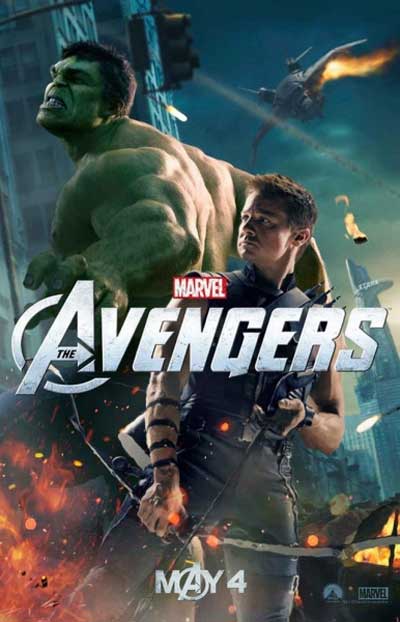 If there are any problems with “The Avengers” it’s the running time and the long stretches of “Tech Talk” it features. My ten year old son (Lil’ Black Saint to you), found it a bit tedious at times and professed that he didn’t understand a lot of what was going on most of the time. Ten to fifteen minutes can be cut without losing any of the narrative. And the rapid fire pace that some of the dialog is spoken in can be a bit disconcerting to younger ears but neither one of them are a deal breaker. All of that “Tech Talk” is manna from heaven for the fanboys listening to it and despite it’s length I thought the film just flew by in a flurry of action & suspense.

“The Avengers” is the best film I’ve seen this year, bar none. It has it all, a great script, great acting, incredible action & characters we all care about. How often does this happen in a Summer “Tentpole” movie? Not too often folks, I daresay that it’s so good that it merits some Oscar attention next year and not just in the technical categories. Hiddleston’s performance must be considered in the Best Supporting Actor” category next year, he is slimy, repulsive, sexy, demanding & funny at the same time. He wears the crown of “Villain Of The Year” very well indeed. I hope he is remembered for his role here, he is so worthy. 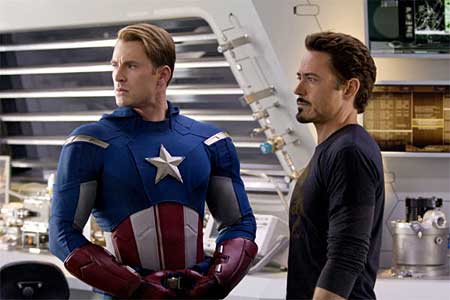 If you haven’t figured it out yet, Five shrouds for “The Avengers”! Not only the best film of the year (So far anyway) but the best superhero film ever made up to this point. It does everything well and manages to pull off the impossible…it makes all of the superheroes feel just as human as we are in the end….no small feat. It is a masterpiece, see it immediately!