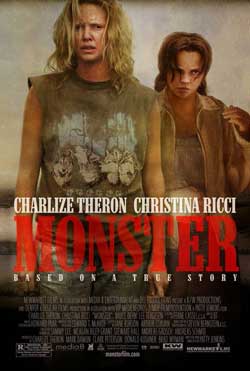 Aileen Wuornos (Charlize Theron, in an Oscar-winning performance) faced difficult odds early in life, abusing drugs and becoming a prostitute (and pregnant) by the age of 13. Wuornos moved from Michigan to Florida where she continued to ply her “trade,” specializing in a clientele consisting mainly of truck drivers. It was during that time that she began murdering any “John” who tried to rape her. Christina Ricci co-stars in this true story.

Hell-o, moviegoers everywhere who may have seen this critically acclaimed, Oscar winning, loving true story (with rave reviews) about the United States’ first woman Serial Killer, Aileen Wournos. A heartwarming tale of love murder and revenge… or was it? This is a different approach to the story of a Serial Killer than what is usually told by film adaptations. It’s almost heartbreaking in a way. Of course, I am referring to Monster. 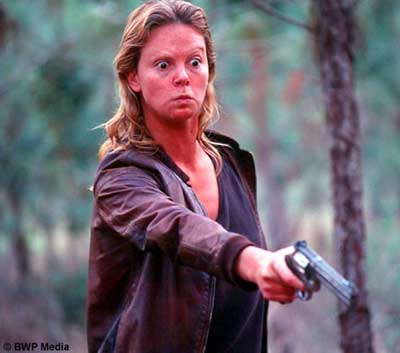 This film (being one of a taboo nature and brutal subject matter in some parts) has received rave reviews from some of the best in the industry. Even though Roger Ebert has talked down on and tried to ban some of my favorite films (as he has praised others), you (and I) must respect his opinion. He has been doing it for years. When his quote is on something these days, you pretty much can bet that it’s going to be good. This is absolutely no exception. Roger called this “one of the greatest performances in the history of cinema” and “One of the great movie-going experiences of my life.” Believe me, folks, the dude has seen a lot of movies in his life and career. To have him pick this as one of the top (“experiences” even) you know that your money and time will be spent in a good way when renting or better yet, buying this film. Trust the word of the best… and no, I’m not talking about myself(but you can take my word for it as well). I’m talking about Roger Ebert.

The film documents the life, love and murders of Aileen (played by Charlize Theron of Trapped) and her sidekick/ girlfriend/ partner in crime/ convicting informant, Selby Wall (played by Christina Ricci of Sleepy Hollow and Interview With the Vampire). In all honesty as great as the film was, it did leave out some of the deeper, darker facts of her life. One other thing it failed to mention by audio was the song Carnival, by Natalie Merchant. Aileen requested that this was played at her wake and it is a good song. The film should have at least closed with it, or it could have been thrown in there somewhere. Even still, that is no reason to overlook this fine piece of cinematic work. It is still better than ninety nine percent of the True Crime adaptations that I’ve seen out there… and I’ve seen just about all of them. This is still high above the rest. 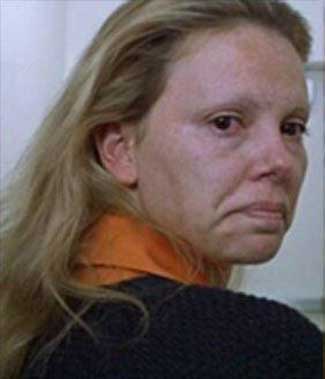 Some of the stories that she tells at trial, she came forth before her execution and revealed that they were all lies. In the film, they are portrayed as true stories. Whether they are or not, I guess only she knows. Aileen claims that she lied to get on with her death sentence. If the jury knew the truth, it could hold things up and she wanted to “set sail on the mother ship.” and “get her wings.” Nonetheless, the stories were still told in detail and graphically shown, truth… or lie.

The acting of course is awesome as with the direction. If there were any flaws (as mentioned above), it would be the writing. Aileen also had a ten times higher temper than portrayed in this adaptation. I thought they could have made her just a little meaner. Some even start to care about her as a person because of the way she is portrayed. Yes, she did go through a lot of messed up sh*t and it did mess with her mind… but that is left a mystery here. The film starts out present day with a voice over of Charlize talking about growing up. They also left out all of the stories about her family’s dark past. Even still, these had different versions as well. Of course, none of these are Charlize’s flaws as an actress. She did brilliant and looked shockingly like Aileen (besides the way Aileen’s eyes grew wide and her brow rose when she got angry. They should have focused on that more as well. She was angry a lot. If anything, the writer should have paid more attention to this detail, otherwise, it was an amazing performance by all. Christina, although much more attractive than the actual Selby, did a magnificent job as the innocent and curious girl that falls into Aileen’s web of passion, prostitution, robbery and murder. She is very adorable and for the most part, innocent also. In my opinion, her acting was right up there with Charlize’s. She should have received an award as well. 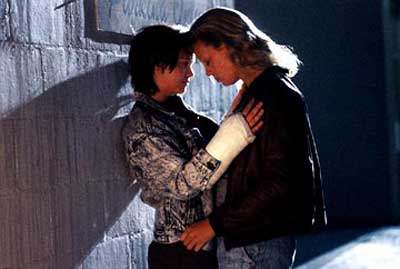 Speaking of amazing, as mentioned before, the make-up crew on this film completely rocked. The Gore Score was your basic gunshots. Not too much graphic violence, but then again, it was not needed. The make-up department has done one of the best I’ve ever seen in transforming someone to look (almost identical) like someone else. Luckily(as an effects artist myself), I was happy to see that the DVD had Special Features (a whole extra disc worth, to be exact) of the entire make-up process… from the freckles, to the teeth and hair. I have already learned most of this, but they show products to shape the face that we were not taught about, and it works wonders. Aileen would think she were practically standing in a mirror if she saw Charlize in make-up. No kidding, it was that well done. 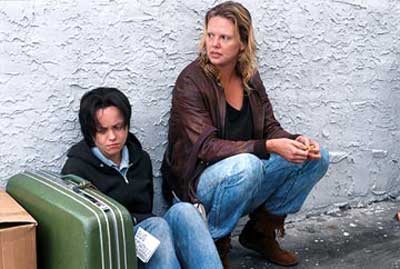 The other Special Features (on the double disc Special Edition) include a Producer and Director Commentary, which Charlize takes credit for this as well. There are bonus reviews, as well as two featurettes called The Vision and the Journey and Monster “Surrounded.” There are deleted and extended scenes an interview with Patty Jenkins and BT ( music composer) and finally, a film mixing demo.

Patty notes in the commentary that Aileen’s best friend gave her blessings and much helpful information on the real Aileen for her research on the film. There is also a small cameo by (my personal favorite… in costume and roll of, not the films in which he appears) Jason Voorhees, himself Kane Hodder (of Hatchet, Friday the Thirteenth: The New Blood, Jason Takes Manhattan and Jason X and stunt man for The Devil’s Rejects among many others). Also Bruce Dern (of The ‘Burbs, Dead Man’s Revenge, Bloody Momma and Black Sunday) plays Aileen’s best friend that is one of the few that do not use her for sex. He even offers her food and beverage for no charge whatsoever… an all around swell dude and friend to have. Aileen would probably tell you face to face if she were still here… That is a hard thing to come by these days. 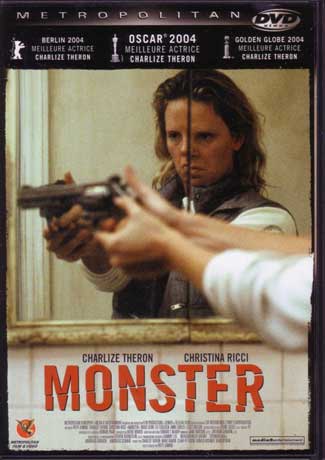 Over all, as I’ve said before… Watch this film if you haven’t already. If you’re hungry or curious for more of this darkly fascination woman with an attitude, check out Nick Broomfield’s two part documentary on her… Aileen: The Selling of a Serial Killer and Life and Death of a Serial Killer. Both are one hundred percent true Aileen, just being herself and bluntly in your face. This killer adaptation of her mostly her love life and the murders involved, is the next best thing. With that said, I give this film, Monster, FOUR HORNS UP.