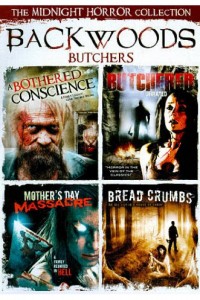 Hey it’s a quad set from Echo Bridge! This time featuring what they are calling BackWoods Butchers. 3 titles I recognize, with 2 we reviewed already. You can read the review on “Breadcrumbs” here or Mother’s Day Massacre here

Now, its probably worth your time to stock up on all these quad sets as they wont be around forever. With the obvious shelf space saving alone, it’s certianly a great time for thinking about space reduction. “Bothered Conscience” looks questionable, though Butchered is one that I’ve seen on shelves before. It’s a pretty decent set at roughly 1.25 a film. Walmart would be your local provider, so grab em up.

Slasher fans will like the mix of premise and violence, we surely did!

Info on the films within:

Films include “A Bothered Conscience”, “Butchered”, “Mother’s Day Massacre”, and “Bread Crumbs”. “A Bothered Conscience”: Twenty years after his father is murdered in a savage act of retribution, Lucas McGavin is left alone to preserve the twisted family legacy. “Butchered”: A group of high school seniors decide to party on a secluded island prior to leaving for college…but the party gets bloody when they fall victim to a recently escaped, axe-wielding serial killer. “Mother’s Day Massacre”: When Jim Cavanaugh heads to the backwoods of New Jersey in search of his estranged mother, what he finds is not the open arms of a loving family…it’s the sharp end of a hatchet… wielded by a demented hillbilly and his backward brother. “Bread Crumbs”: When a group of actors head out to a remote location to film, they find that they are not alone in the woods…two strange children have joined them. But these aren’t normal kids, curious about the newcomers. They’re looking for new playmates. Dead Ones.