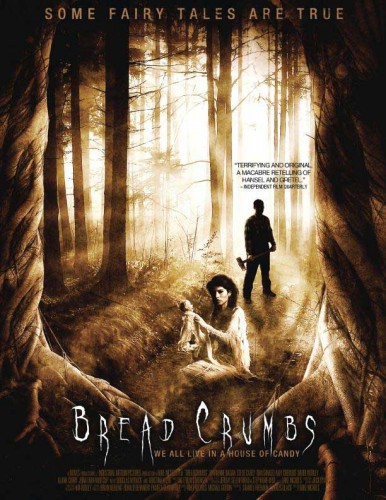 A small group of adult filmmakers travel to a cabin deep in the woods. Along the way, they encounter a pair of troubled, mysterious siblings, Patti and Henry, who live in the nearby woodlands. Soon they find themselves the target of the pair’s violent revenge as they begin to be picked off one by one. They struggle to survive the surrounding terrain, the unknown attacks in the dark and internal conflict as their sanity unravels.

BreadCrumbs is a close cousin to the many sequels and video horror films from the late Eighties and early Nineties. It is constructed and executed much like a later installment to the popular franchises of the time – a Halloween or a Friday the 13th – where the story has already devolved to point where the killer simply encounters another group of teenagers and begins to slash and hack his way through their ranks. BreadCrumbs follows that formula very closely down to the final girl, Angie (Marianne Hagan), adding in the modern trope of the final twist for good measure.

With BreadCrumbs, Mike Nichols (Dead Calling and producer of His Name Was Jason: 30 Years of Friday the 13th) directs his sophomore horror film from a script by Samuel (The Unholy) Freeman and the late Charlie Black. Nichols’ direction is solid and rises the film above its small budget, independent origins. Aside from a few inconsistent transition cuts and odd editing choices (especially toward the end when dawn rises), the films is professionally composed and well staged. While this keeps the film focused and on track, it also keeps the movie from developing its own personality and individuality which it sorely lacks. Nichols ends up with a film that knows what it is but breathes very little life into the presentation. With future endeavors, if Nichols can find a signature quality that will define his own films, he could very well produce a tense modern classic of his own.

The acting in BreadCrumbs is across the board, with some actors standing out while others are still finding their way. For an independent feature, all the actors do a great job at keeping the audience interested; however, only a few rise above the characters they are portraying. Marianne Hagan as Angie, the aging actress filming her final adult film, gets the most to do and shows the most emotion and compassion. She’s the final girl and the only one to connect with the “children” from the woods. She’s one of the main elements keeping the film interesting and the narrative moving even if she overacts a few key moments (such as when she stumbles onto the Woodsman’s property). Douglas Nyback, who plays the supporting character Dominic, is another standout and is quickly identifiable and relatable. His performance is never wooden and has more depth than his surrounding cast-mates. Unfortunately, after the first attack, his character is reduced to a prop on the couch as the others struggle to survive. Jim Barnes, Steve Carey, Alana Curry, Zoe Sloane, Shira Weitz, and Darbi Worley round out the cast. Director Mike Nichols also steps in to play Eddie, the adult film director and “leader” of the group trapped in the cabin.

Amy Crowdis and Dan Shaked star as Patti and Henry, the Hansel and Gretel of BreadCrumbs. While they are referred to as children throughout the film and should be children from their descriptions, they are obviously no longer children to the detriment of the story. Amy Crowdis’ Patti is child-like for sure, but comes across more mature than the story infers. She does quote “girls mature faster than boys” in the script but it does little to sell it. Dan Shaked as Henry towers over most the other actors. They never seems too far removed in age from the rest of the cast. While Patti could arguably pass as a teen, Henry is more of a child in personality than appearance, coming across as a mentally challenged maniac. To their credit they do their best bringing these characters to life and provide memorable characters visually, with Crowdis getting more of the lines and therefore having more opportunity to bring her character to life beyond just appearances. Unfortunately her main trait (her creepy humming) is more annoying than disturbing. Shaked is less successful in his role but ends up being more creepy – but not as frightening – than his costar. His is afforded one of the more memorable scenes when he believes Angie is his mother who has abandoned him once again and then begins to scream “Mommy, mommy, mommy.” If they did not have to be “children” and could have been more of an adult threat, they could have delivered a more threatening set of villains.

The script for BreadCrumbs suggests that it is loosely based on the German fairy tale Hansel and Gretel supplanting them with the creepy wilderness children Patti and Henry. The characters constantly refer to a house of candy and try to force their victims to eat sugar filled morsels. There might be more to their story, a house that once stood in the woods where they now roam, but that is left for the viewer to contemplate. For some it may end up being a hint of something more devious, for others it may end up being a point of confusion – a missed opportunity or an idea not fully realized. The siblings are strange and demented and a bit sad. Their underdeveloped story leaves them as twisted backwoods offspring with a taste for murder with only the barest hints of supernatural origins.

BreadCrumbs is a solid piece of filmmaking that could have used a injection of personality from it’s filmmakers. The script brings very little originality to the idea it springs from and the results make the film feel like a throwback to film from the Eighties and Nineties and the dialogue is a little cliched. The film is fortunate to have a strong cast with a few standout performances from actors likely to appear in future horror films: Marianne Hagan, Douglas Nyback and Amy Crowdis. Director Mike Nichols shows he knows his job technically but has yet to find his own style and flavor. A near miss that leaves the impression that better things are yet to come.