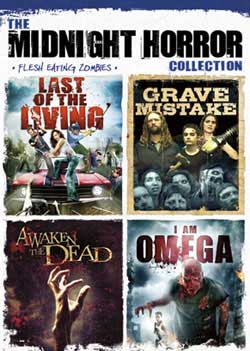 If the economy has anything to offer us horror fans, the one things that true is the emergence of great combo packs and box sets. This latest by Echo Bridge Entertaiment features 4 flesh-eating zombie films at a steal. How  do I know? Well, for one, I purchased a couple of these a year ago at full price each…so 4 for 1 is a fine deal to me. Since this pack was sent as a review product, I went ahead and looked into it. It looks like you can grab this bad boy for a simple $8.49 at Walmart, though I prefer a in store visit myself. In any case look for our individual reviews on these 4 films to pop up here as well! This year is the year for zombies, so why not grab a simple 4 pack for the weekend….good times I tell ya. I included the synopsis posted for all 4 below.

Synopsis
LAST OF THE LIVING
After a deadly virus has turned humankind into flesh-eating zombies, slackers Morgan, Ash, and Johnny spend their days lounging in their skivvies, drifting from one vacant house to another. When the three stumble upon a hot girl who may have a cure for the outbreak, the three decide it’s finally time to step up to the plate and save the world—and the girl.

GRAVE MISTAKE
Someone has been dumping toxic waste in the local cemetery, and the townsfolk are about to discover it was a Grave Mistake! When a mutant breed of flesh-eating zombies rises from the graveyard and descends on the nearby village, a small group of survivors must battle their way through the undead to safety.

AWAKEN THE DEAD
An assassin’s daughter and a down-and-out priest are trapped in a house surrounded by the undead. They battle the monsters outside—and each other—as their pasts bind them together in a web of conspiracy and death. Their only hope for survival lies in facing their darkest secrets, and in a world ruled by betrayal, the real danger may not be outside.

I AM OMEGA
As the survivor of a deadly plague that swept the planet and left millions dead, Renchard lives in isolation, constantly on watch for the infected zombies that hunt him. When another survivor—immune and the key to creating an antidote—contacts Renchard for help evacuating from a dangerous zone in the city center, the future of the human race rests on a single mission!