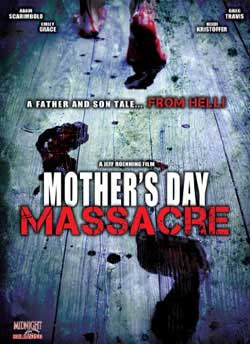 At the urging of his sort of girlfriend Doreen, Jim heads out to a small town with some friends to locate his birth mother. Once they get there they fall victim to a pair of mentally retarded brothers who get their jollies out of slaughtering innocent people. Some of them manage to survive the encounter but their ordeal isn’t over quite yet as the brothers (as well as their mother) soon come looking for them.

“Mother’s Day Massacre (I love the title even if it is a little misleading)” is a pretty good flick and even though it has its share of flaws I enjoyed it anyway. It is just a good, brainless fun movie loaded with violence, gore, and a little bit of nudity to boot. In short there is a little something for everyone and I for one had a great time watching it.

There are a lot of things about it that reminded me of the slasher flicks from the golden era of the 1980’s. We have the opening scene that consists of a flashback where something terrible happens that sets everything up in true 80’s fashion, sex-crazed, pot smoking teens who end up doing stupid things that lead to them getting killed, and some fun death scenes (one death is a nod to “Porky’s” as a guy sticks a certain part of his anatomy into a hole and someone on the other side grabs it…then proceeds to rips it off). The film had a nice retro feel to it and it made me feel all warm and fuzzy inside as if made me think of countless slasher flicks that came out of the 80’s.

While I certainly enjoyed the fact that there were slasher elements to the movie I also appreciated that it had a light comedic tone to it as well. It is obvious that writer/director Jeff Roenning has a pretty good sense of humor as he put in some genuinely funny stuff from time to time without overdoing it. The humor works and as a result we good a good combination of horror and violence mixed in with some chuckles(funniest moment highlights include the sex conversation at the drive-in and what the creepy little red headed kid at the gas station tell Bobby the hillbillies will do to him if they catch him). I think that some of the people out there who try way too hard to make their horror-comedies too wacky should watch this film to see how to do it correctly. It is funny without being obnoxious and silly like some similar films.

I thought that the characters rocked and the actors should be proud of their performances. Jim (Adam Scarimbolo) is a nerdy, lovable guy and you can’t help but root for him (especially when he has to deal with his asshole dad). Emily Grace is excellent as Doreen as she is spunky and tough (but I don’t really like how her personality changed at one point and her eventual fate seemed quick and cheap to me). I also loved Jen (Heidi Kristoffer), the cutie next door and Bobby (Noah Fleiss) was a fun character who I think didn’t get nearly enough screen time (is it just me or did he get killed off a little too soon?). Of course I loved Jim’s dad Tex played by Greg Travis who did a wonderful job playing an asshole and who obviously had a lot of fun in the role. He is one of those despicable characters who have no redeeming qualities at all and you find yourself liking them anyway because he is such a ridiculous piece of sh*t.

While I liked “Mother’s Day Massacre” for the most part there were also some things that bugged me that I didn’t really care for as well. There were some scenes that were just awkward and out of place (such as the whole thing with Doreen getting an abortion and the bit where Tex and his hypnotherapist pal take turns molesting a woman who has been hypnotized) and I think that the film would have been better off without them as they really didn’t add anything to the plot and seemed to pretty much go nowhere.

I also didn’t like how some of the scenes transitioned (it would skip ahead a few days and even a whole week in one instance) and I found it to be pretty distracting. I don’t know what Roenning was thinking but it just doesn’t quite work, especially in the case where people start dying and then at the height of the action we skip ahead a week without any explanation as to how the survivors made it back home alive.

Even if there are some problems with it, I still dug “Mother’s Day Massacre.” I enjoyed the fact that it didn’t take itself too seriously and as a result it ended up being a fun, entertaining flick. It didn’t end up changing my life or anything, but it did keep me occupied for 90 minutes, and for most of that time I enjoyed myself. I would recommend it to anyone as you could do a whole lot worse when it comes to recent slasher flicks. 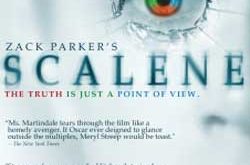 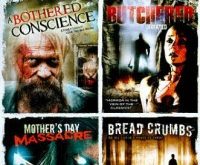