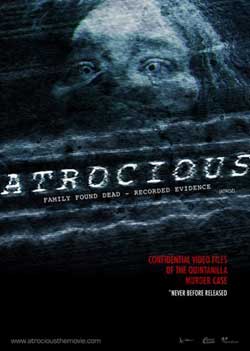 The Quintanilla family was found dead. Recorded evidence was discovered by the police. Production company acquires the confidential material and edits it into a Horror Movie.

Welcome again to another round of “been there”. I come out of these style films with varied mixed feelings. Of the 10 or so I’ve seen this year, the top ones have been “The Fourth Kind”, “REC” and Paranormal Activity (1&2). But style aside, we really are always pulled back into that Blair Witch thing, which sometimes bothers me.

Watch the Trailer for Atrocious

Now this film is getting featured under that Bloody Disgusting brand, which doesn’t mean that you “should” buy into IT. You should however put aside marketing for a second and know that this film is nothing special. I’m not going to give it a total “waste” moniker, as it still has a few good things going for it.

What I was most bothered by, I suppose is that the filmmaking is nothing short of what you and your cousins could do with a handheld camera running around in a dense forest. In this case its a tree filled labyrinth of sorts which is much more interesting. Yes, we get that “Ghost Hunters” POV thing here, and at some points you almost expect Zak from “Ghost Adventures to start a narration.

There is a well (aka The Ring) and no Samara doesn’t come out but something close is reported to dwell inside (I think).

So to bring us up to speed…The Quintanilla family was found murdered in their country side house. We grab a found footage presentation that is kept in authority evidence hands. The family travel out to an old house located in Sitges. With there cam corders in hand they set out to film details surrounding the “Legend of the Girl in the Garraf woods”. We are told about a bad entity by the name of Melinda. We are told that she is different things to different people, so we are not entirely clear if she should be feared.

July and Christian (Cristian Valencia) do the brunt of the investigation which is haphazardly just them walking around filming things. Out of the 5 days they live thru 4. Now what stirs things up is when they go wandering into the woods labyrinth despite warnings from Dad. The area is pretty impressive and certainly a cool shot for a horror film. Though it also might as well be cornfields, if you know what I mean. We get a foreshadow in the way of “this would be scary to walk thru at night” (in which they end doing). Essentially after their dog goes missing and his carcass is found dragged to the bottom of the well, the team begins to freak a little. It is not long before dead folks, start showing up, people get yanked around and a few peculiar things just start happening. Our lovely spirit is of course pissed off and wants everyone dead.

Ok, that’s probably enough reveal as it will require your own experience. I got the notion that the film would be more effective in a theater setting rather than on home viewing. Let me make something clear though…..there’s nothing new here…walk away. It’s ok, if you want to check it out on your own, though don’t expect much beside the occasional out of camera range hysterics going on. The film wins points in a few legit creep moments which really in my mind was in the last 2 minutes. I return to my statement that because this is so cheaply and easily done, we’re bound to see 20 more of these before the trend dies. I’m beginning to worry that filmmakers are getting too comfortable with this approach and losing classic director flair. I’ll be the first to say (well maybe not the first)…we need more Kubrick, Carpenter., Stone  and Coen. Enough with the night vision terror routine.

Major influences here? “Blair Witch Project”, “The Ring”, “Ghost Hunters” and “Paranormal Activity“. If you own all those, maybe that might be enough.