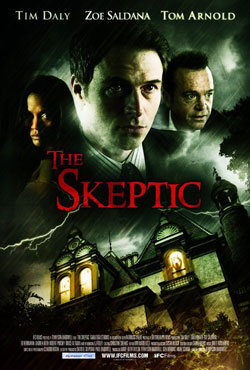 Ignoring the odd circumstances of his aunt’s death and ominous warnings about her abandoned Victorian, cynical attorney Bryan Beckett (Tim Daly) moves into the house. But before you can say “boo,” things that go bump in the night make him question his sanity. Writer-director Tennyson Bardwell’s supernatural tale — by turns comic and creepy — also stars Zoe Saldana, Tom Arnold, Edward Herrmann and Robert Prosky..

Brian Bennet (Tim Daly) is your classic skeptic. He rationalizes, has never believed in anything and certainly doesn’t believe in the afterlife / supernatural. Brian, a successful lawyer who obviously works too hard is informed of his estranged aunt’s death. A woman who Brian has never liked and avoided his whole life, owns a massive estate that Brian assumes will be willed to him on default as the only living relative. Meanwhile, his marriage to wife Robin is in turmoil and Brian recognizes this as a chance to spend some time away by staying at the house for a few weeks. When he receives word that the estate was actually willed to a local sleep lab, he sets out to investigate, look for legal holes in the decision and is plunged into a world that he never knew existed.

Delano sleep lab is a facility owned by Warren Koven (Bruce Altman) who does testing on sleep deprived patients. It also houses a sector that deals in “fringe” paranormal to debunk classic cases of supernatural theories. It is here where Brian confronts Koven about the dealings and makes the acquaintance of a local psychic named Cassie (Zoe Saldana).

Brian’s partner (Tom Arnold) Sully is concerned about his behavior lately and makes every attempt to console him. While providing a tiny level of comic relief, Arnold brings a nice balance of personality to the friendship to counter balance Brian’s cold solid nature. Though at the same time he feels Brian is slipping away into some sort of mental crisis. The events that take place at the house only progress the occurrences even more.

Brian begins to have episodes of hearing voices, seeing visions and mental relapses as his stay at his aunts house continues. Not really buying into his experiences, he seeks the advice of Koven, Father Wymond, his psychiatrist and Cassie to get to the bottom of it all. It becomes apparent that the house is haunted by an evil spirit but not for the reasons he thinks. A suppressed memory of his childhood starts to come to the surface while Brian assumes his nasty aunt was hiding something. In that sense, “The Skeptic” rounds out with a nice level of detective story style flavor.

Cassie, a tenacious woman with highly sensitive psychic abilities shows up to help Brian figure out what exactly is haunting the house and what it wants. What we get is a story in motion that unravels like a classic mystery thriller. “The Skeptic” is really an old fashion – old school kind of scare venture. It uses superb performances, noises and ghostly visions to thrill its audience rather than effects and glitz. In fact Tim Daly’s performance as Brian provides more fright through assumption than what is actually shown. The equally superb score lays a foundation of creepy tones throughout that compliments the film.

Directed by Tennyson Bardwell, it is apparent that Barlow was influenced by the frights of films like “The Changeling” and Burnt Offerings” as the film follows that course of chill inducing style. The location is an impressive mass of home equipped with a rather contemporary decor that echoes the cold feeling sensation to additionally compliment the mood. All these elements actually make for a pretty interesting film and on the edge experience.

Where this movie fails unfortunately, is a full epic that builds up into a let down. There is nothing worse than watching an enjoyable and engaging film to be cheated in the end with a somewhat ambiguous and unresolved ending. Although the point is made, and can be consumed, it felt much like a portion of the film had been taken away or left unfinished. I’m not sure where I stand beyond the statement of great film, crappy ending to advise viewers on who invest the time into this one. As mentioned, it holds all the right elements which is unfortunate because it deserves a good ending. The only hope is that they re-cut the ending before the official product is released. If not, then I’m afraid all is lost.