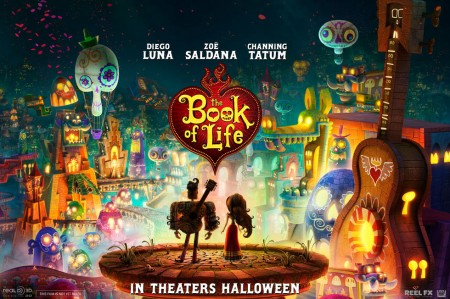 SYNOPSIS:
Manolo, a young man who is torn between fulfilling the expectations of his family and following his heart, embarks on an adventure that spans three fantastic worlds where he must face his greatest fears.

REVIEW:
Book of Life, a supernatural-tinged animated feature from producer Guillermo del Toro and director Jorge Gutierrez, is pure imagination on a stick, colorful, inventive, touching and funny. The minds behind this film, written by Gutierrez and Douglas Langdale, weave the legends, tradition and culture of Dia de los Muertos into a wondrous child’s tale that knocks at the doors of Disney’s finest offerings. It is surprising that the House of the Mouse managed to pass up on the occasion to take advantage of the marketing opportunities of the story and the Mexico stop of EPCOT. The film smartly invites the young target audience into what boils down to a love story with an inventive book end story presenting Xibalba, La Muerta, Land of the Remembered and Land of the Forgotten into a sensational tale told with animated marionettes. It’s brilliant and delightful. The characters are charming, the story engaging, the designs amazing and the themes admirable. Book of Life is a work of art, a dazzling tale of skeletons, tradition and emotion.

The story begins with a small group of children being greeted at the steps of the local museum by a grumpy old guard and a beautiful charming tour guide. The guide leads the group through a secret entrance into a hidden presentation of Mexico and begins to share a tale of Manolo Sanchez, a bull fighter, who yearns to win the heart of Maria even though his best friend Joaquin, a championed soldier, is better suited, more handsome, more charming, more decorated. Taking place almost entirely on the Day of the Dead, the spirits La Muerte and Xibalba make a bet on which of the young men will triumph. When Xibalba cheats by sending his two-headed snake to kill Manolo, the young man must win his way out of the Land of the Remembered, and later the Land of the Forgotten, to return to the his heart’s desire, Maria, and save his town from the wrath of a terrifying bandit. But, thankfully he is aided by a colorful array of ancestors during the film’s satisfying and rewarding conclusion.

One impressive aspect of Book of Life is how slick it is at drawing in its young target audience into the story – a story that is very much a variation of a Romeo and Juliette type love story. Sure, it is broadened with large colorful characters, beautiful and inventive design work and entertaining and lively set pieces; but, at its core Book of Life is a romantic tale. It is how the script avoids alienating little boys and girls turning their attention away from the icky, cootie-ridden emotions. Instead, they are invested, enthralled, entertained and amazed. The script begins with a group of misfit kids heading to a museum led into a magical secret room full of colorful Mexican imagery, culture and imagination. It is aware of the challenges from the onset and addresses them quickly by having the story told through marionette toys as voiced by their mesmerizing tour guide. Sprinkling in healthy portions of supernatural characters such as La Muerte, Xibalba and The Candle Maker, the whole affair dances with joyful glee even its most darkest moments. It has the foresight to return to the kids from time to time, even allowing one child to reinforce the idea with the line “We’re kids…” It is genius.

The voice acting is top notch with no misfires at all. Diego Luna, Zoe Saldana and Channing Tatum breath life into Menolo, Maria and Joaquin, the three leads in a tragic romantic triangle. Kate del Castillo and Ron Perlman voice La Muerta and Xibalba with Ice Cube providing his unique charming take on The Candle Maker. Hector Elizando, Danny Trajo, Carlos Alazraqui, Placido Domingo, Cheech Marin and Guillermo del Toro voice the many rich, amazing character that populate the film. Christina Applegate starts off everything as Mary Beth, the tour guide and master story teller. The dialog is lively and comical almost lyrical equally the visuals in beauty. While Luna, Saldana and Tatum are fabulous in their roles, it is del Castillo and Perlman who steal the show as they dive in and out of the story line. Every time they appear everything else fades away with the combination of the lush colors and designs with the captivating vocal work. The only thing that manages to surprise more than they do is the show stopping far-too-brief solo from Placido Domingo. Brilliant! 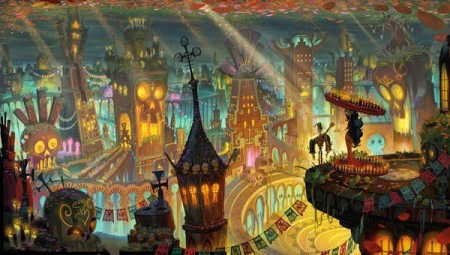 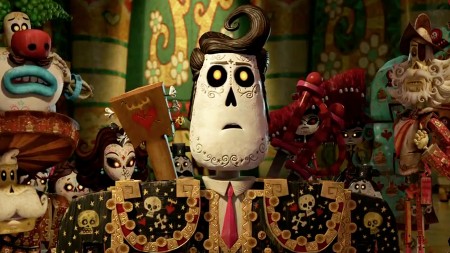 The film makes an indelible impression with its color pallet and dramatic character design. The landscapes are rich and vibrant – except for the Land of the Forgotten, which are no less impressive – and the characters are spellbinding with intricate details and patterns. Every introduction is eye candy, a new taste, a new sound, a new experience. The marionette theme of the characters shared core construction is key to the story’s ability to whisk away the audience into the extraordinary and remarkable worlds they inhabit. Even the bulls for the various bull fighting scenes are unique and fascinating. Little details provide layer after layer of visual splendor. Look closely and the swords the bandit holds appear like giant sharks. 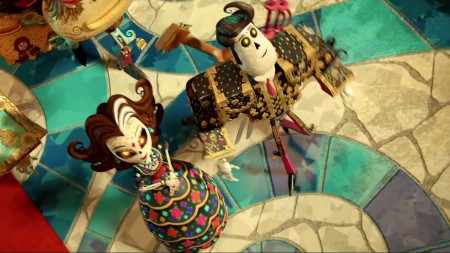 Book of Life may very well be the closest thing to a Disney film to hit the theaters without actually being a Disney film. It contains all the trademarks of a classic animated tale; however, it is unlike the typical princess films audiences flock to year after year. The characters are bizarre but lively and animated in both design and color. La Muerte is likely to become iconic drawing heavily on the vastly popular Day of the Dead make-up and costumes. The vocal talent is vast and punchy providing a fluid emotional core and a rhythm to the dialog. The film takes its audience to the bewitching worlds of the Land of the Remembered and the Land of the Forgotten. Book of Life is an experience that should not be missed by young and old alike, it is a great time in the theaters.