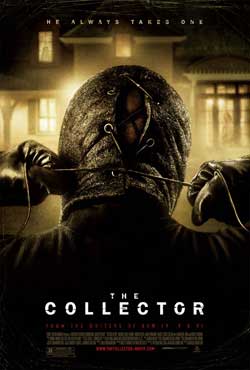 Desperate to repay his debt to his ex-wife, an ex-con plots a heist at his new employer’s country home, unaware that a second criminal has also targeted the property, and rigged it with a series of deadly traps.

It seems at least once a year another shocker…. so to speak arrives on the scene to strike fear into the hearts of consumers. It’s the trends that I tend to notice more than the actual content. But if you spend any amount of time watching Asian market shockers, you’ve seen everything by the time a new one in US comes out. The Collector at it’s core is a very simple premise, with striking familiarity and well done camera work. In fact if anything is a trend for horror these days, it’s violence without motive.

The Collector…a faceless killer that does so without mercy and just for the hell of it. When we compare the latest brand of killers to the 80’s brand, we see certian similarities although the 80s killers usually had some sort of back story. Through flashbacks and dialog we are used to getting the….”oh that’s why he’s messed up” premise. Today it seems to be enough for a killer to show up and just unleash his evil nature. With the exception of Saw which cleverly disguises killing with a sort of bad guy heroics thrown in, Collector is just about a whacked out human killing machine.

Another fear that has come to the forefront is the safety of one’s home being invaded by the worst possible invader. Not your common thug or burglar but death on 2 legs that has a purpose. That purpose may be as simple as “collecting” things but it’s still a purpose.

The Collector does what it sets out to do. It makes you fear man’s nature to become the monster. Our story is pretty simple. A wealthy family is getting their security system installed. With intentions of going away for the weekend, they figure that an elaborate security system and a trained-to-kill dog will protect their home. When the focus is turned to Arkin, the security installation man who is also using the job as a stakeout…we begin to assume a villain of the film. Though audiences are a bit too clever to fall for the compassionate burglar as a candidate for the title of the film. Especially one who is struggling to make ends meet and cover his ex-wife’s loan shark debts. While we don’t advocate his actions, we feel for his situation.

In comes the ultimate antagonist of the film. The one we are calling “The Collector”. What makes the collector more modern based than the old school killer profile is that he is somewhat of an engineer. At least in the sense of booby trapping the house with every conceivable house of horrors / Indiana Jones kill toy. The house that was considered the safe haven has actually becomes the torture chamber. This is clever call on the filmmakers to switch the ideas of where safety lies.

Just outside is freedom, and an environment free of the engineered booby traps. Also freedom away from the cold blooded killer. Director Marcus Dunstan is no stranger to the horror genre. Writer of Feast1, 2, and 3 he now can add “The Collector” to his list of titles which include Saw VI and Saw VII (slated). I think its fair to say that Marcus has his foot in the right doors to really take the new reigns on horror. 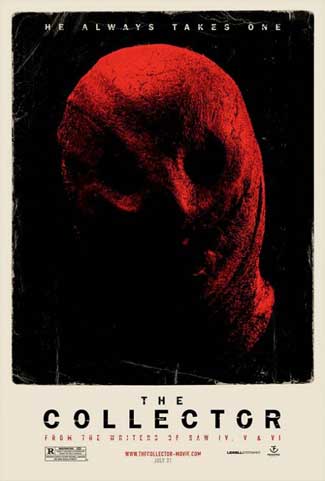 “The Collector” features great performances by Madeline Zima, Josh Stewart, Andrea Roth, Michael Reilly Burke and Karley Scott Collins. Their roles though are minimal to being basically victims of the collector. Makeup FX cite Gary J. Tunnicliffe as a major role in implementation and film editing was handled elegantly vicious by Alex Luna and James Mastracco. Special mention goes to the title sequence designer which didn’t seem to be credited on screen or per IMDB. So whoever handled those did a bang up job in my book. 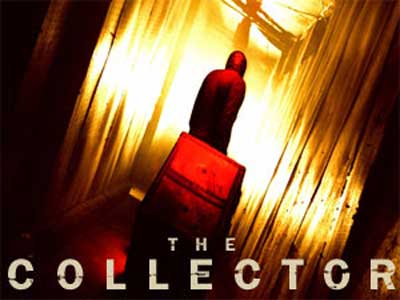 What did I think of the film? I loved it. It comes at you with the same intensity that films like “Strangers”, “Inside” and even “Martyrs” (somewhat), but as far as comparison the film has a similar sense as the Uwe Bolle film “Seed”. I think casual audiences will find the killing and death traps a bit much for them. Horror fans will love the bare bones …slaughter fest. Beyond that there really isn’t much more to say. I think if you also dug the recent “Laid to Rest“, you’ll be at home here.