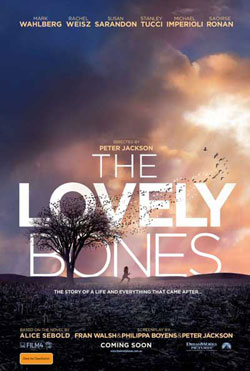 Based on the best selling book by Alice Sebold, The Lovely Bones is the story of a 14-year-old girl from suburban Pennsylvania who is murdered by her neighbor. She tells the story from Heaven, showing the lives of the people around her and how they have changed all while attempting to get someone to find her lost body.

The Lovely Bones is the latest eye candy extravaganza by director Peter Jackson. Co-written, produced and directed by the man who brought you King Kong, tales of hobbits an wizards and a few pretty notable horror pieces as well….this man is the one to keep your eye on. “The Lovely Bones” is somewhat of a family movie that’s not meant for families. While it does feature fantastical visual elements of in between worlds, purgatory and after life magic it also centers around a pretty grim occurrence.

That is …the innocent neighbor who lives down the street and plots the kidnaping and murder of children. This premise is the focal point of this story that is wrapped with beauty and heavenly finesse. For this reason, there is enough here that crosses over into the material that young ones shouldn’t be watching. Of course, most parents will use this as a good example why one shouldn’t talk to strangers or go to strange places with neighbors. Though ultimately there was a great comparative sense to the film “Dreams may come” that also deals with highly visual after life visions.

An all star cast includes Susan Sarandon as Grandma Lynn, Mark Wahlberg as Jack Salmon, Rachel Weisz as Abigail Salmon and Stanley Tucci as the antagonist villain of the film. Tucci has one of those…Ive seen him before but cant-place-him faces, who at times resembled Judd Nelson to me. Probably because his resume includes 70-some tv appearances in different series roles. Tucci hits the nail with ease as the devious child killer. Fans of Millennium will instantly start making comparisons somewhat expecting agent Frank Black to come reeling out of the shadows. But in all this film is brilliantly scored with a light air of here and after that showcases the strength of will and the beyond.

Susie Salmon (Saoirse Ronan) has just turned 14 and is in the prime of her life that includes a move into first love. Her innocence and girl school crush on fellow classmate Ray Singh is just on the brink of developing into a magical moment for her. Upon invitation to meet at the mall she never does make it home that day to seal her first encounter and first date for that matter. Jack Salmon, her father who tinkers around with a pastime of designing ships within a bottle is a hardworking man who lives the perfect family unit example for others to follow. Him and his wife Abigail are proud parents of 3 children and a drop in mother-in-law who prefers the materialistic life road in life. In all things are pretty decent.

That fateful night, Susie never returns home and sets a 11 month investigation into gear. Jack who’s role is complimented with actor Mark Wahlberg’s style of acting feels that there is still unfinished business to be solved and forgoes his hobby obsession for a new focus of finding his daughters killer. As the story evolves, we find out what other dark secrets await along with the order of plans that life inflicts on the unjust. Susie struggles with leaving her worldly life and family behind in conflict with moving on into heaven.

This conflict is observed from another plane that she must inhabit while time moves forward on earth. Loss, supernatural and family all collide in this intriguing tale of things we cannot control. The film holds a gripping pace as many assumptions are discarded in place of where the writers want us lead. I think in the end it all works itself out for the better on a journey that is sometimes not where we expected things to lead.

As mentioned in synopsis this film was based on the best selling book by Alice Sebold. A perfect pick for Peter Jackson to mix genres and visuals into an engaging story that has award nominee written all over it before it even leaves the gate. At its heart lies a message that is at times unclear but points to our ability to move on and leave things of the past to the past as the importance of the future still lies ahead.