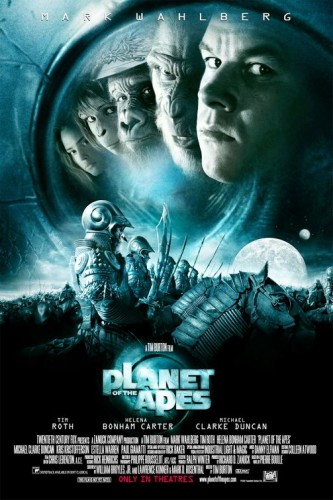 “It is the year 2029: Astronaut Leo Davidson boards a pod cruiser on a Space Station for a routine reconnaissance mission. But an abrupt detour through a space-time wormhole lands him on a strange planet where talking apes rule over the human race. With the help of a sympathetic chimpanzee activist named Ari and a small band of human rebels, Leo leads the effort to evade the advancing Gorilla Army led by General Thade and his most trusted warrior Attar. Now the race is on to reach a sacred temple within the planet’s Forbidden Zone to discover the shocking secrets of mankind’s past – and the key to its future.”

Instead of resisting the incredible influx of sequels and remakes, I now simply hope for the best and expect the worst, but there’s one aspect to the last decade of Hollywood remakes that still drives up the wall: Films promoted as remakes which aren’t actually remakes at all. Bedazzled (2000), The Fast And The Furious (2001), The Time Machine (2002), Death Race (2008), The Day The Earth Stood Still (2008), Piranha (2010), Fright Night (2011), the list goes on forever. It’s almost as if the powers-that-be have simply slapped an old title on a brand new script, which was definitely the case with Wild Wild West (1999). 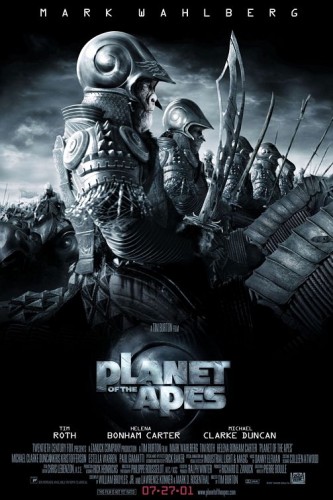 Planet Of The Apes (2001) is one such film. Screenwriter William Broyles Junior sent 20th Century Fox an outline for a script entitled The Visitor which takes place on the fictional planet of Aschlar, intended to be the first of a series of films. The script caught the attention of director Tim Burton. I was lucky enough to meet Mr. Burton while visiting the set of The Corpse Bride (2005), and he told me that he wasn’t interested in doing a remake or a sequel. “But I was intrigued by the idea of revisiting that world. Like a lot of people, I was affected by the original film. I wanted to do a re-imagining.” Re-imagining! Brrrr! The very word sends shivers up my spine. I would have slapped him in the face there and then – if I only didn’t need the work… 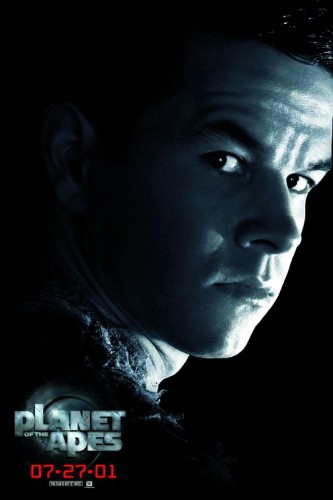 So if it’s not a remake, what’s it all about then? Well, it starts out a bit like Project X (1987), except it’s the year 2029 aboard the space station Oberon, where Leo (Mark Wahlberg) trains monkeys to pilot space pods. A pod piloted by a chimpanzee named Pericles is used to probe an electromagnetic storm and disappears. Leo follows, loses contact with the Oberon and crashes on a planet ruled by apes who can speak English and treat humans like slaves.

Leo meets a female chimpanzee named Ari (Helena Bonham Carter) who protests the awful treatment humans receive, and buys Leo to serve in the house of her Senator father (David Warner). He also meets the power-hungry General Thade (Tim Roth) who is trying to advance his career by courting the Senator’s daughter. Leo escapes and convinces Ari to join his human rebellion against the apes, with General Thade and his posse in hot pursuit. Leo discovers the ancient remains of the crashed space station Oberon and deduces that, although he entered the vortex before the Oberon, it crashed on the planet long before he did. 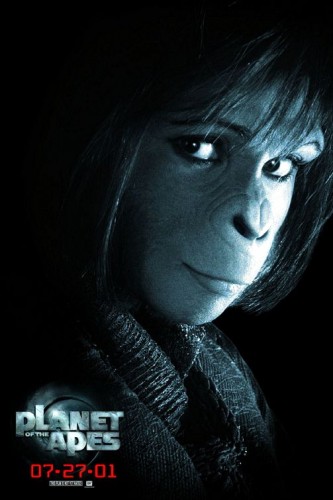 The battle between humans and apes is interrupted by the pod piloted by Pericles, who was pushed forward in time as Leo was, and has just now found his way to the planet. The apes interpret his landing as the return of their god Simos, and all hostilities between humans and apes magically disappear. Leo uses the pod to travel back in time, crash-lands in modern Washington, and discovers the Lincoln Memorial is now a monument honouring General Thade. Police, firefighters and journalists descend on Leo, all of them apes in contemporary clothing. As my old friend M. Night Shamalamadingdong would say, “What a twist!” 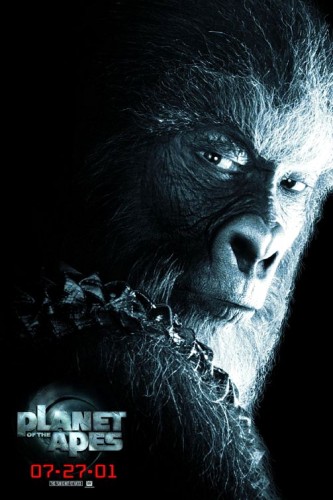 It’s not all bad though. There’s Charlton Heston‘s unusual cameo as an ancient anti-gun lobbyist. There’s Rick Baker‘s remarkable makeup. There’s Danny Elfman‘s incredible score, one of his best in my opinion, with musical effects that would chill Jerry Goldsmith himself. There’s the beautifully detailed design typical of your average Tim Burton production. There’s the fantastic cast who, it seems, were told beforehand that Roddy McDowall and Kim Hunter had to ‘over-act’ under all that makeup, and they’ve taken that advice literally – they’re all candidates for the Richard The Third ward if you ask me, in particular Paul Giamatti, outrageous as the disgruntled slave-driver and primary source of humour in the film. 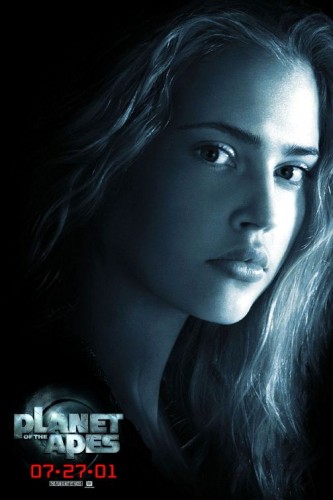 20th Century Fox said that if this version of Planet Of The Apes was a financial success, then a sequel would be commissioned but, even though the film was indeed a financial success, Fox decided otherwise. When I asked Mr. Burton if he would be interested in working on a sequel, he said, “I’d rather jump out a window.” Planet of the Apes was the last film Burton worked on with his former fiancée Lisa Marie – soon after their relationship broke up, Burton started going out with Helena Bonham Carter. 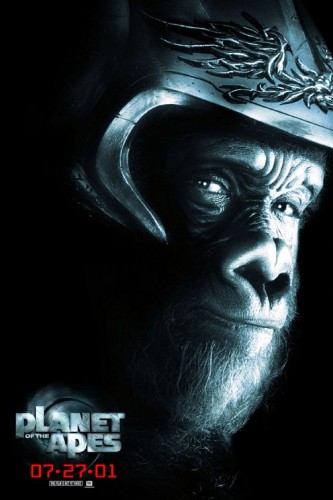 The one element sorely missing from this version of Planet Of The Apes was arguably central in the original: The parallels drawn between ape society and contemporary human civilisation. It would have definitely benefited from a director more experienced with subtle satire such as Paul Verhoeven, or even John Landis, who was actually in the apes last cinema outing, Battle For The Planet Of The Apes (1973). It’s with that thought I’ll ask you to please join me next week so I can poke you in the mind’s eye with another frightful excursion to the backside of Hollywood, filmed in glorious 2-D black & white Regularscope for…Horror News. Toodles!