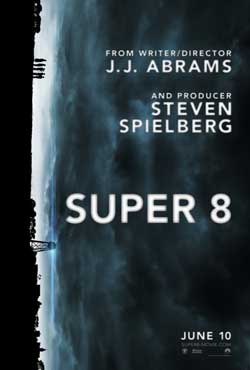 After witnessing a mysterious train crash, a group of friends in the summer of 1979 begin noticing strange happenings going around in their small town, and begin to investigate into the creepy phenomenon.

You know, when The Black Saint attends movie screenings, he usually attends private ones in small 30-40 seat screening rooms. I abhor waiting in line for anything. Usually the line leads to me and it’s filled with acolytes seeking absolution. But sometimes I have to get in a queue with the commoners & wait like the rest of you. It was rather hot in NYC today & if you are a regular reader of my reviews/rants you know I hate the sun & all it stands for. Yet here I was, standing in line waiting to see a preview of “Super 8”. The latest from director  J.J. Abrams & producer Steven Spielberg. I must admit the wait was worth it.

“Super 8” tells the story of six kids in the late 70’s (1979 to be exact) who are working on making a horror film for entry into a amateur film making contest. One night as they are filming a pivotal scene in a train station, a train comes by & sensing that this would give their film some needed production value they film the scene as the train whizzes past them. But as the actors recite their lines, the cameraman notices a truck headed right for the train, as if it’s intention is to derail it. And this it does in a very spectacular scene as bits of pieces of freight train & truck go up in a million blazing pieces. But the young cameraman notices something is trying to break out of one of the derailed cars. Something really big & very angry. All the while, their (laying flat on the ground) super 8 camera films the whole scene. 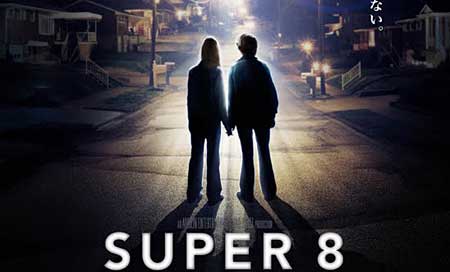 It is going to be very hard for me to describe much of the plot of the film to you without giving away too much of the story so I won’t try to. What I am going to tell you is that “Super 8” is a truly wondrous creation. I’m sure most of you have seen the commercials & trailers and wondered what was going on? Well, to start off, it IS a monster film. There is something big and royally pissed on that train and now it’s free. Free in the small town of Lillian, Ohio and the kids have it’s escape on film (although they don’t know that yet). The movie opens with a wake scene, Young cameraman Joe (Joel Courtney) has lost his mother to an accident at her workplace. As friends & family eat & discuss matters amongst themselves inside, Joe sits solemnly on a swing in front of his house. It is here where we are introduced to his friends: Charles (Riley Lee) who is the film’s pudgy Orson Welles-ish director, Cary (Ryan Lee) who essays all of the explosive special effects (with an enormous amount of homemade firecrackers & small explosives), Preston (Zach Mills) who handles sound & Martin & Alice (Gabriel Basso & Elle Fanning) who are the principal leads of the film. Joe handles make up & camerawork as well as providing the model train they were going to use before they caught their break, quite literally, with the arrival & subsequent destruction of the real freight train. I can also safely assume you know from the ads that Joe has a serious crush on Alice as well.

The truck that rammed right into the train is being driven by Dr. Woodward (Glynn Turman) who the kids find still alive amongst the wreckage. He is/was their science teacher at one time or another. They mistake him for dead in the wreckage of his vehicle when he awakens & admonishes them to “Not speak of this. They will kill you & your parents”. But what is he talking about? The kids don’t know yet because they didn’t see “It” escape…not yet anyway. The military suddenly arrives at the scene & the kids make for a hasty getaway, making sure they recover their badly damaged camera & the film within it. Now from this point on I can’t say much more than something is out there and it’s snatching up various people and taking them somewhere. This same “Something” has also scared away all of the dogs in the entire town apparently. They just up & go when they sense the presence of the “Something”. The military is evacuating the town under the pretense of a raging brush fire (that they started) & Joe’s dad, deputy Jackson Lamb (Kyle Chandler) is trying to figure out what is happening in his normally quiet, bucolic little town as all hell is breaking loose. 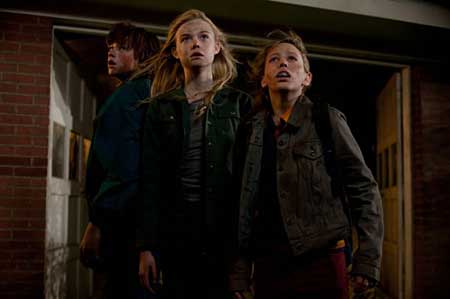 That’s it. I can say no more than this regarding the plot from this point on other to say that it is at times intensely emotional, suddenly shocking & hysterically funny through it’s running time. The kids are perfectly cast, their opening scene at Joe’s home during the wake does a wonderful job of introducing them & giving us an immediate idea of their personalities. All of them are so good in fact that they seem to have known each other for years. There are wonderful bits of give & take between all of them throughout the film and it all comes forth from them so naturally that it seems like a lot of it is ad-libbed. I believed that they grew up together, each of them knowing of the others peculiarities. But special mention must be given to Elle Fanning (Dakota’s lil’ sis), who is preternaturally beautiful & seems to grow into young adulthood by the end of the film. Her face glows even when it’s covered in soot & mud and hers is a natural talent. One that (over time) will blossom into something quite close to perfection. Kyle Chandler (who is a dead ringer for a young Robert Forster) runs a gamut of emotions in the film from sorrow to anger to acceptance & eventually ending up as a father who is desperately looking for his son. Ron Eldard plays Alice’s dad, Louis, who is a drunkard through most of the film but in the end also realizes he is a father & hasn’t been a very good one for most of the film. Both of them are excellent as is Noah Emmerich who just has bad intentions oozing out of his pores as soon as he hits the screen as Nelec, who is commanding the forces that have invaded the town seeking the creature.

The special effects are amazing as well. The train collision scene is the most harrowing one I have ever seen. My only issue with it is that none of the kids were hurt during it. Hell, even Turman, who is still in the wreckage of the truck isn’t quite dead yet. All the kids get is dirty & a bit nervous over what they’ve just witnessed. Throughout the film, the effects work is seamlessly integrated into the real world. So much so that you forget you’re watching a film that is laden with them. The production design is top notch as well, especially Joe’s room, which is filled with Aurora monster models, movie posters & a sly little tribute to George Lucas tossed in for good measure. The creature itself isn’t seen much at all for most of the film. We get fleeting glances of it every so often & when we finally do see it in all of it’s glory what we get is a sort of “Cloverfield-ish” looking thing. Just a bit smaller than the one in “Cloverfield”. It’s not disappointing, it’s just not especially different looking. And I was hoping for something different looking to justify the hype the film was getting.

Now I have to make a (sort of) confession to all of you. I have been intrigued by this film since i first heard of it & started paying very close attention to the trailers as they kept coming over the last few months. I believed I had figured out the gist of the story just from studying the commercials/trailers & such. And guess what? I was about 90% right. That doesn’t make “Super 8” a bad movie at all, it doesn’t even make me feel particularly pleased with myself because I wanted to be wrong. There’s no fun in knowing what’s going to happen next or how the film is going to end. But I did have a few key plot points wrong so there was a bit of a kick waiting for me. Suffice it to say that although it’s directed by Matt Reeves (superbly by the way), it’s produced by Steven Spielberg. Think about that as you watch the trailer for it again & see what you can come up with. It’s actually fairly obvious. 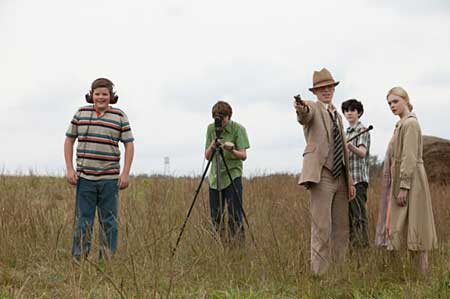 I wanted to call “Super 8” a kind of “Goonies” on steroids type of film, which it is in a sense. But ultimately it’s about life, love & death and how children deal with all of them. It’s a wonderfully exciting, full on blast of action which still knows that in order to make all the bombast on display mean something, you gotta have some heart as well. The Black Saint is giving “Super 8” four shrouds for it’s superbly executed effects & sterling acting from the entire cast (especially those kids)! But I have to deduct one shroud for a story that with a little thought, anyone can piece together from the trailer & thinking about who’s producing this picture (think about it, it’s all there in the trailer). But you & your kids will enjoy it a great deal. There are some tense scenes in it but nothing a child 10 & up couldn’t handle. A wonderfully satisfying experience is waiting for your entire family…go see it! 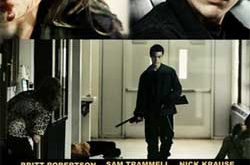